The Internet has been called by writers in a recent New York magazine article one of the ten great inventions of all time, comparable to the discovery of fire and the invention of the wheel.  Like the wheel and fire—which between them have caused no small number of tragic and painful deaths—the ‘net has not been an unmixed blessing.  The invention has been responsible for 24-hour bullying with attendant suicides and a loss of communication and writing skills.  As Jackie Mason said way back in a Carnegie Hall show, “People in New York have been known to e-mail complete strangers climbing Mt. Everest, but they don’t even say hello to their neighbors in the elevator.”

The failure to communicate has been with us and the topic of literature, theater and film before even IBM filled a room with computers during the seventies.  But Jason Reitman, who wrote and directs “Men, Women & Children” would like to point out the ways this wonderful, but flawed, invention has disrupted families, focusing on one suburban community filled with dysfunction.  And he does quite a job, with the able help of a staff of visual effects people who follow all the transcriptions from computers and i-phones with titles spread across the screen to allow all of us in the theater to eavesdrop on the most intimate conversations.

Based on the novel by Chad Kultgen which (as the Amazon site says) involves “porn-surfing fathers to World of Warcraft-obsessed sons, from competitive cheerleaders to their dissatisfied, misguided mothers,” Kultgen clicks open the emotionally treacherous culture in which we live.  While it’s true that the characters in the movie, and perhaps in the books as well, come across as the sum of their quirks rather than wholly fleshed-out individuals, this alleged weakness turns out to be a strength, as it concentrates its satire on those very quirks without needing to delve into wordy backstories, flashbacks, and time-consuming conversations.  The quirks are the people.

Pulling the junior-high students of the book into high school—perhaps to allow Reitman to make use of actors who are at least eighteen years of age—the director known for “Thank You For Smoking” (one of the great satires of modern cinematic times) and “Up in the Air” (a piercing, yet comic, look at the tragedy of employment firings)—travels to a bland, all-white suburb whose inhabitants are anything but relaxed, middle-class adults with Leave-It-To-Beaver teens.

The story is framed by Emma Thompson’s overlong narrations about how the Earth looks like a ping-pong ball from outer space, making our lives irrelevant from a cosmic viewpoint.

As one of the strongest characters, Jennifer Garner performs in the role of Patricia, who could stand in as an archetype of controlling mother.  We’ve had this sort of character ever since Mrs. Flintstone stood at the wall of her cave with a club to ward off horny teens lusting for her daughter.  In this case, she believes that if she watches over the Internet and i-phone exchanges of Brandy (Kaitlyn Dever), her daughter, Brandy would never get into trouble.  Did she never hear of guys and gals talking to each other directly in school and setting up dates?  But oh, in the Internet age, people are supposed to communicate only through their machines.  We don’t know why Patricia is so controlling, but should we care?  The important thing is that some in the audience might find her familiar when looking back at their own childhoods.  Do we know why Brandy seems the only person who reads books in addition to sending out her own texts?  Doesn’t matter, but Brandy does turn out to be a hero to her boyfriend, Tim (Ansel Elgort),a principal character whose mother had abandoned the family leaving him under the care of his angry dad, Kent (Dean Norris—“Big Jim” from TV’s “Under the Dome”).

Not as ethical as Brandy is Joan Clint (Judy Greer), who is so eager to satisfy the wish of her daughter, Hannah (Olivia Crocicchia), for a career in TV that she pimps her out on the Internet, using her camera to pose the teen in seductive poses.  She is also a parent-without-a-partner, getting together with Kent, who comes across as awkward in getting back into the dating game after his own wife flew the coop.

Adam Sandler appears in his most serious role as Don Truby, the male half of a dead marriage, whose wife Rachel (Rosemarie DeWitt) seeks excitement from an escort service, with Don following on that path with his own adventure with paid women.  Elena Kampouris rounds at the principal cast as Allison, an emaciated, anorectic teen encouraged in her neurosis by favorable comments on her figure, though she is headed for tragedy after a hookup with a callous football player.

It’s a different world from the 1950’s, not only in the way all teens are wired, in one case a girl communicating with a recent hookup by email even though she stands ten feet from him inside the school.  The problems these families face are not caused by the Internet.  People still communicate face-to-face all around the country, using mobile devices as accessories.  But “Men, Women & Children” serves as an excellent example of fine ensemble acting, the people coming together credibly at different points in the movie with some crackerjack dialogue courtesy of the writer-director.  There are melodramatic moments, but no car crashes (one of the faults of wired communication, or rather of the illegal ways that drivers become riveted to their machines rather than to the road).

The entire project is controlled, even to the point of anesthesia, as some performers speak in monotones, and all in the quiet murmur associated with folks of a higher socio-economic class.  Money may bring happiness if spent in the right ways, but Reitman, or rather Chad Kultgen who wrote the book, appears to believe that the more you spend on communication equipment, the less joyful you’ll be. 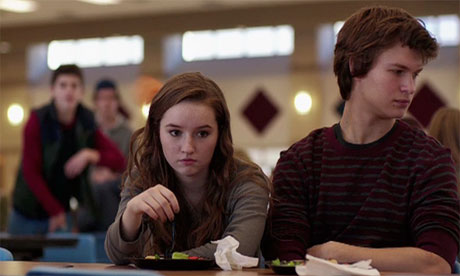