It was only a decade ago that the Travis Knight’s Laika Entertainment emerged from Portland, Oregon and made their presence known on the big screen. The company easily captured the attention of audiences with their inspirational tales and incredible stop motion animation. ‘The Boxtrolls’ may be their latest animated feature film, but it was once part of the first batch stories to to fall in the development pool. After several years the project was able to lift off the ground and turn into the delightful animated film that many people will see in theaters this coming weekend.

The animated tale centers on a group of underground creatures who take in a baby and raise it as their own. Years later Eggs (voiced by Isaac Hempstead Wright) gathers all the courage in him to save his underground friends from a fiendish exterminator living in the world above.

There was a lot of preparation that had to go towards creating the perfect story out of Alan Snow’s gigantic children’s book “Here Be Monsters,” but Laika never gave up on the tale. After 7 years of preparation Laika had the right story, but the project wasn’t done just yet. The great assembly of talent formed the film coming out in theaters this weekend. ShockYa got the opportunity to speak with Travis Knight about the process of creating ‘The Boxtrolls,’ why it sat in development for so long and forming the perfect voice cast.

ShockYa: It’s been mentioned before that it was a particularly long process for Laika by taking a 550 page book and transforming it into a script. How was that process?

Travis Knight: When Laika first started about 10 years ago, the first two projects we took on and developed to make films out of, the first one was Coraline and the second was “Here Be Monsters” by Alan Snow. It’s a children’s book and it was something that we felt was really interesting. It really had qualities of some of the greatest children’s literature like Dickens or Dahl. It had this really cool, absurdist point of view with a sense of humor, something you would find in Monty Python. It was huge. It was this massive tome with all of these kind of environments and characters. So finding a way to distill all of that down from 550 pages to a 90 minute film was a trick, and actually that was a majority of time that was slow cooking in the studio and developing, that was what we were trying to figure out. 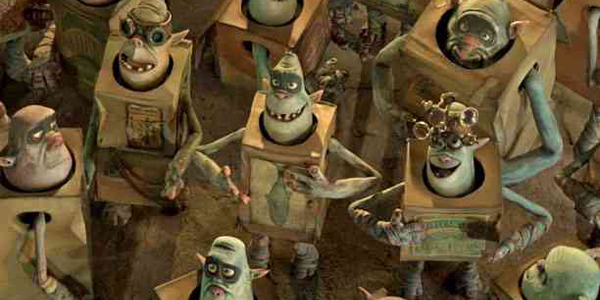 How can we take the essence of this great book and turn it into a film. It’s two entirely different experiences, reading a book and watching a film. Watching a film, you have to be able to tell a pretty clear, simple story in a finite amount of time, and then you have to find ways to layer it with other things. Really distilling, getting it down to the essence of what the story was, and it had to be personal to us. We had to find a way that we can personally connect to how our very unique kind of great and personal stamp to it. It came down to the story of this boy coming above ground and this girl from the social world, coming together and finding out how this world can work, how they can define what makes a family and then folding all that metaphors of politics, society and everything else, but getting into that simple core was the trickiest thing. Being able to push out all the stuff that didn’t support those ideas was a tricky thing early on. With multiple drafts of the script, we were very faithful to the book. In the end we were getting a story that really resonated, and so at some point we had to put that aside and say okay, what’s the real core story that we wanted to tell, and once we did that we were able to make this film.

ShockYa: Was this story supposed to actually come out before ‘ParaNorman?’

Travis Knight: The thing with developing is that you have a lot of things going on at any given time. It’s like spinning plates and things move forward and you get a road block and come back. We probably have about 10 projects in development at any given time. Some things are very difficult to crack and sometimes you never crack them. Some things come together much more quickly. ‘ParaNorman’ came together really quickly, and this one came together more slowly in a period of almost 10 years, but what kind of defines the choice for us on what film we make next is if owe feel it’s something that has a bold idea behind it, that’s distinctive and kind of unique, it’s own thing that’s also enduring that’s not a pop culture confection and that this has something meaningful to say. It will be as relevant now as it will be 20 years from now, that sort of thing. We were developing “Here Be Monsters” first before ‘ParaNorman,’ but ParaNorman did come out before. We got a lot of other things we’re working on too and who knows when they’ll come out. 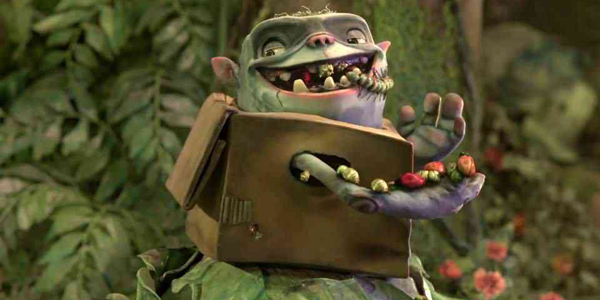 ShockYa: There are several themes that emulate from ‘The Boxtrolls,’ from accepting who you are to embracing your uniqueness. What do you believe is the main theme for Boxtrolls that you love the most?

Travis Knight: What I love about ‘The Boxtrolls’ is that at the very core of the film is a very simple idea about what makes a family, what defines a family. You have this boy, this orphan boy who was raised underground in pretty horrible conditions in which most people would say he was dealt a pretty bad hand by being raised in squalor, and yet because of this surrogate family. Because of this group of people who raised him and loved him, he’s rich in what matters.

At the other part of the spectrum you have Winnie (voiced by Elle Fanning) who is the daughter of the mayor. She’s an aristocrat, nobility who’s has been lavished with gifts and this lifestyle and yet she’s starved of affection. We look at these different families and what defines them, what makes them and what ultimately unites them all. In the end, whether it’s a surrogate family or whether it’s a natural family, a traditional family or a non-traditional family, ultimately what makes those things work is this kind of shared concern, love and commitment to one another. That can come in any number of different forms. It’s not necessarily a nuclear family. It can be one that’s altogether different. It’s one of those things that any parent will struggle with trying to find the balance in their life of family and meaningful work. All of those things are kind of layered in core story of these different families. What I love about ‘The Boxtrolls’ is that, just like Dickens or just like Dahl, it layers in other ideas, bigger ideas that go beyond the personal boundaries of society. We talk about bigotry, corruption in politics and all of these big things that have just kind of folded in metaphor within this very simple story, but because the vessel is so trimmed it allows us to exploit those ideas while still holding onto the main core of the story.

ShockYa: The character looks have always been rather unique when it pertains to Laika films compared to other animated films. The style is very distinct. The female lead is not just a skinny little girl. She’s got meat on her bones. 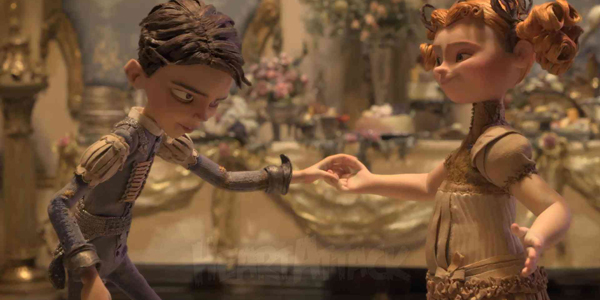 ShockYa: And that’s great. Then there’s other characters like our villain who has the portly belly, voiced by Sir Ben Kingsley. He pulls off such a great job with the voice, really diving into that role. What was the process like piecing together that voice cast and seeing them bring these characters to life?

Travis Knight: Ultimately what you want is you want the kind of specificity and authenticity in these characters so that they feel like real people and they don’t feel like caricatures. That they have kind of depth. For Snatcher in particular it was tricky. He really carries a lot of story weight on his shoulders. He needs to occupy a really critical part of the story, and yet we didn’t want him to be this two-dimensional, mustachioed twirling villain, we wanted him to have dimension. He’s menacing, he’s scary, he’s intimidating, but he also has shades of vulnerability. He has a shred of humanity left within him. As audience members we kind of emphasize with him. We understand what it’s like to be someone who’s denied entry into a club that we’ve always wanted to be a part of, and what that can do to you inside. It’s literally eating him up, and so with Snatcher we had an idea of what we wanted and anytime you cast an animated film, it’s different than a live-action film because what you’re playing with is the voice. They have to occupy their own sonic space in the spectrum so you want Snatcher to sound nothing like Eggs. You want them to be able to play against each other, and Winifred has to have her own kind of unique space.

You’re always looking for interesting-sounding voices that also can bring emotional authenticity to it. And so with this film, what we did is we pulled clips from actors’ interviews or films to see how their actual voice sounds, and from their films how their dramatic voices sound. We felt just like a band or an orchestra, finding those instruments that felt like they really brought something unique individually to the film. We were very fortunate that nearly everybody that we went out to right away were excited by the film. Sir Ben Kingsley in particular there was absolutely no chance he would want to be part of our tiny stop motion film. He’s one of the greatest actors who ever lived, and when he said he wanted to be a part of it we celebrated throughout the studio because this extraordinary actor who wanted to be a part of our film. And when he showed up at the studio, he had a fully-formed idea of what he wanted to do with that character, and when he started speaking, it was not what we thought that guy was, but that’s what a great actor gives you. The first time he started talking we agreed that Snatcher sounds absolutely perfect and who he needs to be.

‘The Boxtrolls’ is out in theaters nationwide on September 26.