A documentary style horror film about a filmmaker and his crew whom go to the supposedly haunted St. Mary’s Church at Clophill, Bedfordshire to attempt to capture something supernatural. 50 years ago there had been an event where a Black Mass was held on the grounds of the church. Tombs were looted and animals were sacrificed. Since then there had been sightings of apparitions and other unexplained phenomenon. The film crew meet up with some witnesses and members of a paranormal society and manage to film some shadows as well as record some voices on EVP.

The Good:  The scene with the EVP (Electronic voice phenomena). If we’re not going to spend the money to show us anything supernatural, your audience will eat that up.  The acting was good because it gives the feel of a real documentary.

The Bad: Holy Jesus this film was so boring I had to actually replay it 3 times because I stopped watching, picked up my phone and started watching home organizing videos on Youtube; this film is basically unwatchable. The whole beginning is buildup of them organizing a crew and talking. They look around the decrepit church and find an animal foot, a broken horn and a pile of bloody bird heads being overtaken by earthworms. Not even maggots/mealworms for the gross factor, just ordinary garden earthworms.  Absolutely nothing exciting or interesting happens until the 1:17:00 mark and that’s basically the end of the film.  they see some head hanging in some bushes, but you can’t really tell what it is unless you rewind and pause.  Then the monks from the Holy Grail come walking out of the forest with torches up to a naked woman (with the biggest merkin I’ve ever seen) and paint an upside-down cross on her torso. At least we get to see some boobs, but how random can they get?  They try to scare us at the end by having a six year old girl look like Samara from The Ring stand in front of a giant crucifix that’s been thrown on the ground…then nothing happens. What the hell was that all about? There was no point to it at all except to imply that the ghosts that we never see followed them home. Nobody dies, we see some more surveillance footage where a gate opens after a cat walks by. Really? Wow. How frightening.

The DVD features two dry as hell commentaries and some boring as f— deleted scenes. I’m not even going to attempt to sell this, because I couldn’t wait for this to be over having to watch it several times in order to get an honest opinion of this film.  I can compare the buildup to the two hours the public spent watching Geraldo opening Al Capone’s vault and found nothing inside. In short, it’s a complete waste of time. It had an interesting premise that went nowhere. It succeeds in capturing realism which is where it actually fails, because real is boring. 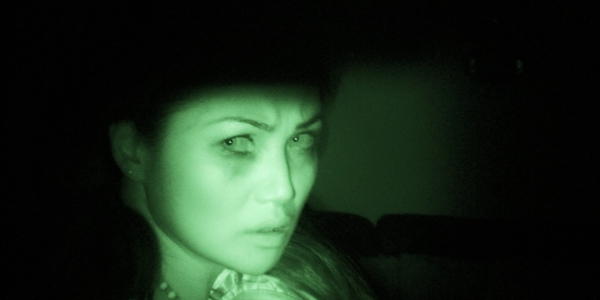