In writer-director Ruben Östlund’s darkly comic vision, a cowardly decision in a single moment can spell either an end to a marriage or at least redefine a couple, who might think, “This is not the person I married.”  It doesn’t matter how rich or poor the couple may be, and in fact the principals in “Force Majeure,” Swedish title “Turist,” are upper-middle class tourists from Sweden who unwind—or who think they will unwind—in the French Alps.

The scenery is gorgeous, as captured by Fredrik Wenzel’s lenses in the Hotel Les Arcs in Savoie, France, heightened by Hakan Blomdahl’s visual effects.  The film features a Swedish family which one critic notes looks as though they came out of an Ikea catalogue.  Tomas (Johannes Bah Kuhnke) and his wife Ebba (Lisa Loven Kongsli) are on holiday with their two pre-teen children Harry (Vincent Wettergren) and Vera (Clara Wettergren).  They’re having lunch at their hotel’s outdoor restaurant when an avalanche heads toward them.  At first Tomas assures his family that it’s a controlled avalanche, but when the snow is cascading out of control, the patrons run for their lives.  You’d expect that Tomas, the man of the family, would think first of protecting his wife and children, but instead, Tomas bolts with his iPhone leaving the kids to scream helplessly for their daddy.  This cowardly act, performed in a single instant, not only ruins the family vacation but threatens the stability of the marriage to such an extent that young Harry confesses that he is afraid that his parents are going to be divorced.

While this does not sound like a comedy, the movie is loaded with moments of jocularity, most of which are not of the sitcom variety but punctuate the director’s view that life, even in moments of crisis, is chock full of comic undertones.  For example, when Tomas and Ebba bicker loudly outside their fourth floor hotel room, their entire blowup is observed silently on the fifth floor by the hotel janitor, who simply lights a cigarette and views the proceedings.  It’s as though he were saying, “Who are these people, who speak strange languages, have money up the wazoo, and yet think nothing of spending their time in paradise as though they are in hell?”

Also amusing is a brother, Mats (Kristofer Hiviu), a recently divorced man with a full, red beard now spending time with a younger girlfriend, Fanni (Fanni Metelius).  While Ebba obsessively tells people about her husband’s cowardice (he denies running in the opposite direction), Mats makes awkward attempts to rationalize his male friend’s behavior, speaking like a psychotherapist who explains that the survival instinct is so strong that in extreme danger, one may think only of himself.

In a more serious vein, Ebba discusses her views on marriage and relationships with a more liberated woman, one who though married has a new American boyfriend in tow.  The woman explains that she has an open marriage, and that she doesn’t mind at all if her husband enjoys a dalliance with another woman.  (I thought Swedes were cool with the idea, but Ebba seems old-fashioned by that country’s standards.)

The acting is as terrific as the scenery.  Kuhnke and Kongsli are convincing as the poor little rich couple, their kids acting either cute or annoying.  In one scene which brings up some recent articles about Swedish education, the two children, peeved about their parents’ reaction to the avalanche, shout “Go away” several times until, believe it or not, the older folks respect the will of the pre-teens and take off.

Writer-director Östlund, whose film won the Jury prize at Un Certain Regard Cannes in May, may have been inspired by Julia Loktev’s 2011 film “The Loneliest Planet, in which Alex (Gael García Bernal), on a backpacking trip in the Caucasus Mountains, hides behind his fiancé, Nica (Hani Fursternberg), when held at gunpoint in the sticks of Georgia.  Östlund is clear enough about his intention to upend conventional bourgeois views.  The proper-looking Swedish couple with the two beautiful, blond kids, seem to relish putting each other in a corner, he by regularly denying that he ran away during the avalanche, she by raising the issue whenever a few sips of wine loosens her tongue. 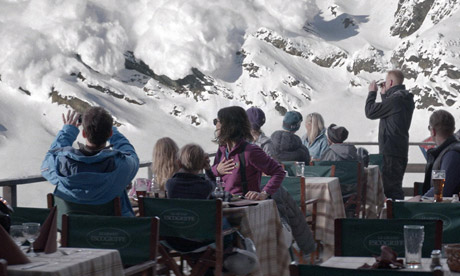