This generation is set in a very sensitive environment, one where the slightest phrase or word can be misinterpreted, but there’s still a large number of people whose closed-mindedness continues the not-so-subtle waves of racism that still runs through this country. At the surface of Justin Simien’s ‘Dear White People,’ it’s apparent that’s one of the main themes they’re going after, but there’s so many more topics that the film manages to cram within a couple hours that hit points for every audience member, no matter what their race.

‘Dear White People’ nips at the heels of the racially offensive college parties, ones that stereotype a culture to an embarrassing degree. This trend has been continuing on for the past few years, publicly humiliating a number of prestigious universities across the nation. The film follows the lives of four black people as they weave not only through the difficult terrain of college life but finding their own identities in an ever-judging culture that threatens to bury them in their own clichéd roles laid out by society.

At the forefront is Sam White (played by Tessa Thompson), an outspoken activist and student on campus whose ever-growing platform puts her in uncomfortable territory right off the bat. She never expected to win the president seat for her university house, and with that comes a whole swarm of responsibilities and pressure by people whom she considers friends. Sam isn’t just the voice of the black students on campus, but a woman whose afraid to really fall in love with Gabe (played by Justin Dobies) because he’s of a different race. It’s all very real topics that many races have been dealing with for years, and it still hasn’t subsided with the newer generation. Young Mexicans, Asians, Caucasians and other races still have trouble following their heart and dealing with interracial relationships due to the previous generation and their closed minds on who their offspring should date.

In the other side of the spectrum is Troy (played by Brandon P Bell), a stellar student whose continual pressure by his father Dean Fairbanks (played by Dennis Haysbert) tears at him everyday. At one point or another we’ve been weighted down by the pressure of a parent who only wants the best out of their child. But Troy has a hard time dealing with the ongoing stress that comes with his position in university, and what everybody expects out of this top notch student. Brandon P Bell wonderfully displays the ongoing internal struggle that’s happening inside Troy, and how difficult it is to break away from the path, one that ultimately is weighed down by the ongoing guilt of a parent on their child. It’s wrong to feel that kind of restraint on the decisions one makes on their life, and Justin Simien’s clever writing showcases that without keeping us too seeped into Troy’s story, giving the viewer plenty of time to understand the rest of the main players.

Then there are two more vastly different viewpoints between the characters Coco (played by Teyonah Parris) and Lionel (played by Tyler James Williams). These two characters are having the biggest identity crisis out of the others, having to deal with whether or not they should absorb themselves more into the black or white cultures in order to survive in their university, and more importantly in society. The viewers follow them as they see how much these two can take as individuals before they possibly lose too much of their own self in order to conform what society wants them to be. It is true that the high school mentality doesn’t the psyches of some people, but most adults just learn to deal with them and move on. College is still a time where some people are learning who they truly are, and seeing the vast differences between Coco and Lionel’s paths of finding their identities is entertaining, exciting and a little sad to see (due to one ending path).

Let’s take a moment to sit back and really understand and appreciate Justin’s skillful writing that’s in ‘Dear White People.’ This movie could have simply been about the controversy that surrounds universities that participate in these awful racist parties, but it blossomed into something a lot more tangible for audiences to really grasp. The array of topics never appear to bog down the story and never hit the point where they make the viewer feel uncomfortable. Another section that continually enhances the movie is the original music by Kathryn Bostic. When it’s intertwined with the intricately placed shots by Simien, the movie comes off as practically flawless. And let’s not forget how incredibly funny this film can be. It’s not serious the whole time, and even some of the points made about how black people are treated by white people are pretty chuckle-worthy, even though they’re true at the same time. Simien has a way to deal with small topics, points about what black people may find annoying in a comical way, and it works.

‘Dear White People’ is not only a cry to stop the ongoing racism that’s still lingering in this nation but gives a multitude of races hope that everyone can be comfortable with themselves despite what ethnic stereotypes could be slathered on them. 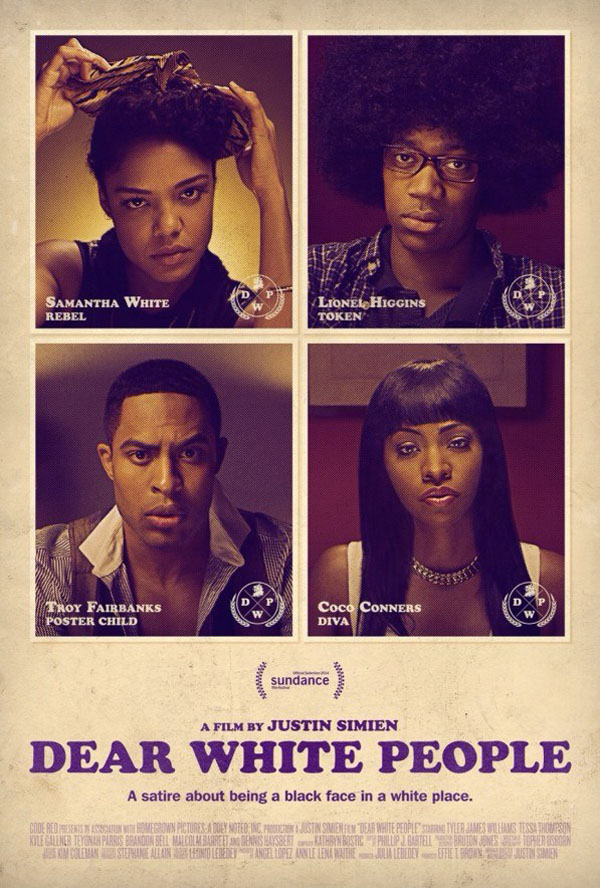