When Barack Obama gave that rousing speech during the 2004 Democratic convention, the public believed that progressives would finally come to power.  When he accepted the nomination for president in 2008, he again got large segments of the American public to its respective feet, making us think that we would be graced with charismatic leaders into the foreseeable future.  Now, however—not to disparage his great accomplishment, the Affordable Care Act, which had been a dream of chief executives since F.D.R.—our commander in chief comes across as a tired man, sporting some gray hair, a fellow who even ignominiously lost the first debate in 2012 to Mitt Romney.

With “Viva la libertà, writer-director Roberto Andò is concerned about a similar situation occurring in Italy, or by extension over a great part of the Western world.  Politicians try to rouse the public, they take office. They are unable to accomplish what they set out to do.  This movie about Italian politics, anchored by Toni Servillo’s performance in two roles, examining the character of two men.  One is a politician, Enrico Oliveri.  He is depressed.  The other is his twin brother, Giovanni Ernani (a nom de plume), a philosophy professor and author of many books who has just been released from an insane asylum.  He’s depressed, but he’s also apparently bipolar.   When Enrico, who is a senator and also the leader of his center-left party, delivers an address to party members, he sounds as though he’d rather be anywhere else, particularly when heckled by a woman in the audience who accuses him of ruining the party.

Enrico does, in fact, fulfill one aim, not a political one.  He disappears, old and fed up with politics, heading to Paris to meet up with his ex-girlfriend Danielle (Valeria Bruni Tedeschi), who is now married to Mung (Eric Nguyen), a filmmaker.  Enrico’s right-hand man Andrea Bottini (Valerio Mastandrea), gets the bright idea to recruit the insane but brilliant twin brother, Giovanni, to take the place of Enrico, and Giovanni comes through in much the way that our Sarah Palin electrified her audience by her charismatic speech.  Never mind that both Sarah and Giovanni know little about politics, the difference being that Giovanni can not only rouse large groups but charm people on a one-to-one basis as he does when visiting the country’s president (Massimo De Francovich), and by meeting the nation’s chancellor with whom he engages in a shoes-off tango.

If you want political satire with teeth, take a look at The Daily Show as Jon Stewart skewers politicians right and left, particularly the former. Granted that “Viva la libertà” is not stand-up comedy that could outlast its welcome if it ran longer than 22 minutes.  But in the 94 minutes of the film’s running time, one has to wonder what is being satirized.  Is it the electorate, the citizens who erroneously equate charisma with the ability to deliver programs that can awaken a country with a depressed economy and a failing spirit?  Is it the politicians themselves, who with Machivellian motivation bamboozle the people with promises that are too vague to conceptualize?  And does the writer-director want to confuse the audience, making us wonder at times whether we are looking at Enrico or whether we’re facing Giovanni?  The content of the film is too banal, lacks real entertaining value, and if it does not project its humor, that could be because of the difficulty of exporting laughs across the Atlantic.

For better parody of corrupt politics—at least for Americans—revisit Ivan Reitman’s Capra-esque “Dave,” about an honest man, a lookalike of the president, who is chosen simply as a decoy.  He takes on the role of president, and initiates reforms for a people he genuinely loves. 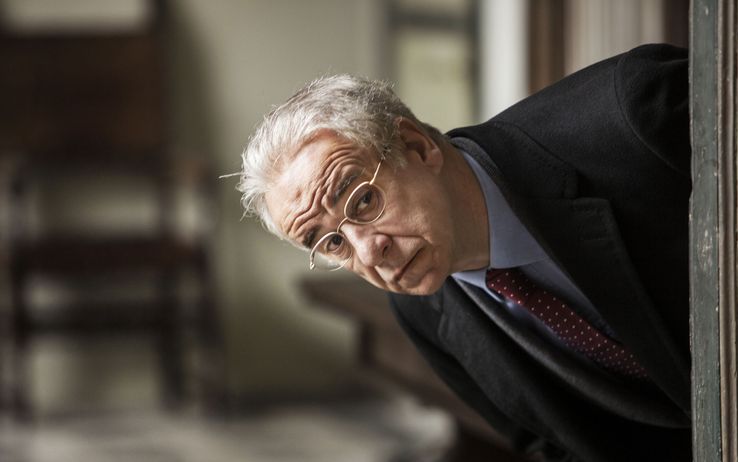