During the American Civil War, 257 teenage cadets from the Virginia Military Institute in New Market, marched 80 miles to fill a gap in the line and charge in the one-day battle at Shenandoah Valley. Only 10 were killed. This is the story of seven of those boys and only four of which came out alive.

Lt. Gen. Ulysses S. Grant (Tom Skerritt) is labeled “The Butcher” by President Abraham Lincoln (Michael Krebs), whom orders the troops to descend on Shenandoah Valley which is on the border of New Market. Maj. Gen. John C. Breckinridge (Jason Isaacs), is short on soldiers, so he reaches out to the academy to fill the lines and fight Robert E. Lee’s army.

One night Old Judge (Keith David), the slave in charge of the bakery was captured by soldiers after trying to feed some starving slaves. John who was once indifferent about slavery wants to release and defend them. All of the boys take responsibility for the stolen bread.

Sam meets Libby Clinedinst (Mary Mouser), the daughter of Mrs. Clinedinst (Lauren Holly), whom runs the nearby girls school and boarding house. Their relationship is sweet, yet short lived. She basically becomes an unwed widow. Two kids are forced to grow up so fast in times of war.

The Good: A little piece of history for you Civil War buffs. You get a good dose of the feels with the acting and cinematography. The Virginia Military Institute’s New Market Oath Ceremony in the special features gives you a quick history lesson and the beauty of the ceremony.

The Bad:It plays out like a Hallmark TV movie. A bit melodramatic and tug on the old heartstrings. After the hazing of Brother Rat, they ask if he’s hungry and announce they’re going for a midnight raid of the bakery. It’s still daylight outside. The institute didn’t plan on feeding their cadets? Of course they’re hungry. As the boys march past a house towards the New Market Gap, John sees the slave he saw auctioned as a child and she hasn’t aged a day. Having the only Jewish cadet ask for a New Testament to read to his dying friend was a bit of an eye-roller.  The boys breaking rank to stop and help a slave woman trapped under a broken wagon was both heartwarming and sappy.  The mustachioed David Arquette was barely in the film and his acting consisted of mostly screaming orders.

Field of Lost Shoes is an adequate tale of a senseless war and the monsters in charge forcing children to fight for them.  Children who were more brave than those who lead them. I did get a little verklempt at the end when we were told what became of the survivors, because films like these remind us that it was all very real and tragic. 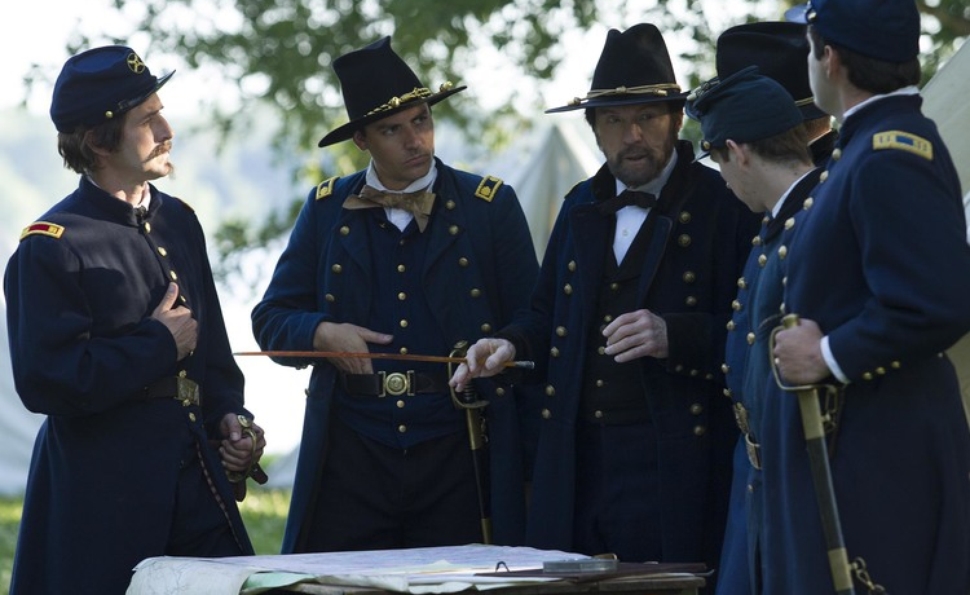