A MOST VIOLENT YEAR

New York City remains the world’s most exciting metropolis, but not so far back, it was also a dangerous one.  Murders and rapes approached an all-time high in the early 1980s, and if you were in a dog-eat-dog business, you faced not only the wrath of your competitors but you enemies’ determination to finish off your company with methods that would not be unfamiliar in the movie “The Godfather.”

With a style best known to imitate that of the late, great Sidney Lumet, whose “Prince of the City” stars Treat Williams as a detective uncovering police corruption in 1981, writer-director J.C. Chandor—known for “Margin Call” (following investment bank activities during a 24-hour period) is in his métier. Chandor, mounting a criticism of laissez-faire capitalism during the financial crisis in 2011, focuses again on New York City. This time Chandor presents a tantalizing, slow-moving, respectful-of-audience nourish thriller filmed by Arri Alexa mostly in Manhattan’s outer boroughs.  Locations include Maspeth and Long Island City in Queens, and the most dramatic scene on the 59th Street Bridge leading from Manhattan to Queens.

Not only has Chandor given life to his taut script, whose thrills are punctuated by Alex Ebert’s music.  He is graced by two terrific performances from the always reliable and nowadays, seemingly ubiquitous Jessica Chestain and from a breakthrough performance from Oscar Isaac.  Isaac, who played a scamming American tour guide in Athens in “Two Faces of January” and in “Inside Llewyn David” as a young singer navigating the folk scene in the Greenwich Village of 1961, rivets the attention.  Here he is the charismatic capitalist, the modern Horatio Alger, who risks all to develop his empire.  He is in the business of selling oil for heating in New York, is faced by violent competitors who poach customers from one another, and even worse, who send thugs out to hijack trucks, to beat up the drivers, and to sell thousands of gallons of oil to wholesale customers.

Wearing the wide-lapel collar on his camel’s hair coat—designed by John P. Goldsmith whose production design puts us squarely into the eighties, Oscar Isaac performs in the role of  Abel Morales, an ethical fellow married to Anna Morales (Jessica Chastain), who is the now-entirely-honest daughter of the man he worked for as a mere truck driver.  Determined to own rather than lease a former garment building on the water—which would give him a location that could squeeze out the competition–Abel, together with his lawyer Andrew Walsh (Albert Brooks), negotiates with Josef (Jerry Adler), the Haredi owner whose terms are oppressive.  Abel must pay a deposit, which he would lose if he does not come up with the balance of $1.5 million within 30 days, but his attempts to rustle up the bucks in an honest way are frustrated by the hoodlums who attack his driver, even seeking to enter his mansion-like home.

Though an immigrant, Abel has shed traces of his foreign origins, even instructing his sales force on the fine points of closing, which include accepting the hospitality of the customers (choose tea instead of coffee because tea is classier), taking the most expensive cookie offered (that shows you’re good enough), and looking the customers in the eye for a bit longer than is comfortable.

As the story progresses and violent incidents mount up, Abel pushes his luck during the turf war, sympathizing with those on his staff who are beaten, their trucks robbed to sell the oil.  We in the audience are immersed in a world that few if any would know about, a world that has its own codes and jargon with robberies of which those of us in our theater seats would probably know nothing.

With terrific side roles from Albert Brooks as Abel’s lawyer, Alessandro Nivola as a competitor whose residence holds an indoor tennis court, and David Oyelowo as Lawrence, an intrusive prosecutor, “A Most Violent Year” scores thanks in large part to performances from Chastain and Isaac.  It is also both a critique of capitalism and a homage to our economic system, one which rewards the winners and society as a whole but which threatens to destroy those who cannot really make it.  Now more than ever we feel the truth of Fred Ebb’s kudos to New York, “If I can make it there/ I can make it anywhere.” 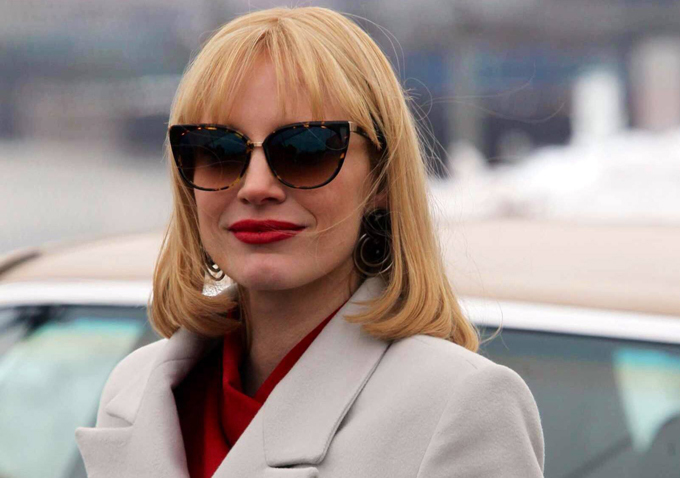