Science fiction thrillers made today have a lot to live up to, merely because there’s a number of movies already out there that have defined this sub genre for many years. Those projects found unique ways to twist and turn their audiences’ minds any which way, leading them up to the conclusion that viewers gripping the edge of their seats. Even though there’s a lot of sci-fi thrillers to choose from doesn’t mean that there’s no more room for others to contribute their work to this section. And since this film is being headlined by a duo whose forté is the sci-fi genre, viewers get another dose of the filmmaking brothers with their latest, ‘Predestination.’

Ethan Hawke stars as am anent who’s sent back in time in order to track down an unknown bomber whose mark on society has left lasting effects on the future. It’s up to this agent to find out who’s the culprit and put an end to it, but it gets complicated rather quickly when he empathizes with the stranger behind it all. Even though the agent is learning more about this stranger, the clock is ticking on the impending danger that could have both the past and future stuck in a constant, deadly loop.

Some of the strongest acting from this picture isn’t through Ethan Hawke, but through the talents of Sarah Snook. She has her hand in playing a key role which really showcases her great acting range. She transforms into her role seamlessly, giving off a performance that makes the viewer think that you’re not looking at an actress pretending to be someone, but that person is really that character. Since this is a thriller and a mystery, it means we can only talk about Snook’s role up to a certain point. To continue explaining it would spoil a large portion of the movie, but what she’s able to do in this movie is definitely worth the price of admission.

That’s not to say that Ethan Hawke wasn’t still doing a fine job in his own respective role as the time agent. The actor definitely does take a back seat to Snooke for the first half of the film, but after that he takes front and center stage with the kind of life changing decisions that could permanently alter the future for himself and many others. His involvement with finding out who the bomber is doesn’t only have to do with the future of society but how his involvement ultimately infects his own life for better or worse.

In some ways ‘Predestination’ comes off as a bit of a character study than a large time-traveling film. The science fiction aspect is there, but it’s conveniently placed so that the filmmakers can get our characters seamlessly from point A to point B. It’s more of a side note than anything else. But after a short amount of time the mystery within ‘Predestination’ topples over and loses any interest the viewer could’ve had with it. The first thing to blame is some of the makeup effects, but a larger portion of the blame had to do with the story line.

By the 45 minute mark it’s easy to tell which direction the third act is heading towards, and by that point it’s difficult to block it from your mind. It deflates some of the excitement that would be there once viewers make it to the third act, but being able to watch it all unravel is still a bit entertaining to see. The overall plot falls into a lukewarm surprise once everything has been revealed, but at least some of the secrets are kept a mystery for a long while thanks to some careful blocking techniques. If Michael and Peter Spierig didn’t really take the time and effort to intricately plan their shots, then ‘Predestination’ would’ve lost all it’s mystery and wonder in the first ten minutes.

‘Predestination’ is a decent action sci-fi thriller with some intriguing twists and turns layered throughout the movie. The mystery doesn’t hold up too well but the performances are enough to keep people in their seats from start to finish. 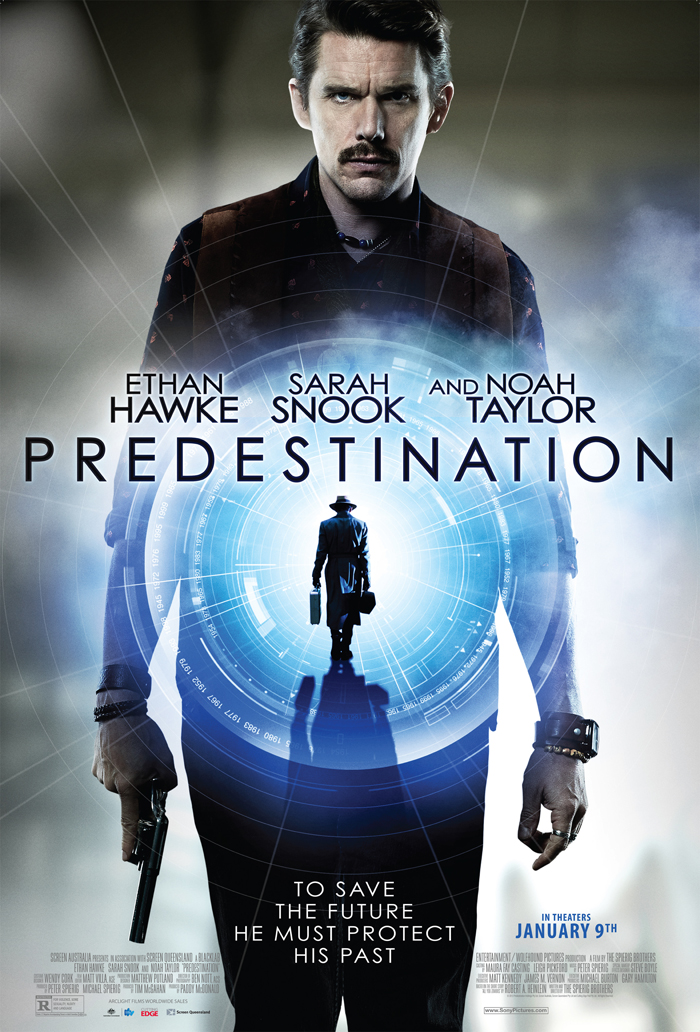 Predestination is out in theaters everywhere now.

Cancel reply
IFC Midnight’s Wyrmwood: Road of the Dead Coming to Select Theaters Feb. 13
The Avengers: Age of Ultron Gets A Brand New Trailer
To Top