There’s enough energy on display from these French teenage girls to power an Airbus 330, or at least put some speed on the train that carries the young people from their working-class suburb to Paris.  “Girlhood” may or may not be a comment on French politics, specifically the charge that Western Europe has not done enough to assimilate those with Arab or Muslim backgrounds, hence terrorism.  But one thing is clear: these girls are having the times of their lives, but you can’t stay sixteen forever.  There is nothing in store for them once they must go out and make a living, though many of them could conceivably get jobs cleaning hotel rooms like the mother of Marieme (Karidja Touré), the principal performer, who has never acted before and lights up every frame that she’s in.

Céline Sciamma, who wrote and directs the movie—which contains considerable improvisation—is in her métier, having sat at the helm of “Tomboy,” about a closeted transgender ten-year-old girl who introduces herself to the neighborhood as a boy.  Similarly, in “Girlhood,” Marieme, who takes on the name “Vic” for “Victor,” presents herself near the conclusion with an outfit that covers her breasts and finds her bonding with boys, thereby turning off a guy who wants to marry her.

If Sciamma is not involved in making political/sociological points, she is presumably showing us a realistic portrait of a band of girls who have dropped out of school, who have amazing camaraderie, and who will fight to defend the dignity of their friendship.  For example, did you ever see two teams of girls, in France no less, playing American football?  This is how the film starts with a bang, mellows into a display of the affection that the females feel for one another, while their bonding may actually be required for protection since they come from the same suburban Paris that produced the movie “La Haine” (“Hate”).

In mourning the loss of Marieme’s early shy, sweet character, Sciamma first portrays the girl as one who hopes to go to a high school (“I want to be normal”) but is told that, having flunked subjects three times is being steered to vocational training—which she rejects.  When she arrives home with her teammates, going through a group of boys who will be boys, she shows a tenderness toward her two younger sisters and at the same time a fear of her older brother, Djibril (Cyril Mendy)—who will reinforce Muslim morality by severely criticizing Marieme for having an affair with a handsome lad.  Through her friendship with Sophie, aka Lady (Assa Sylla), Fily (Marietou Touré) and Adiatou (Lindsay Karamou), they show their hostility to other teens of color, in two cases coming to blows to the cheers of a mixed group of onlookers.  Marieme, who is introduced to shoplifting clothing by her pals, will advance to selling drugs for a while for one Abou (Djibril Gueye).  By now she has changed from one who shyly looks down at the ground and talks sweetly to a hardened ghetto fighter who even bosses around her muscular boyfriend during one assignation.

Though Sciamma hones in on the black, probably Arab-French underclass—everyone is of color except for a group of whites at a party which Marieme enters to sell drugs—there is some universal truths on exhibit.  If at least one third of African-Americans and Hispanics drop out of high school, as we’re led to believe in our country, their fate is mirrored in the lives of these young women of color in suburban France.  They’re having as terrific time day after day with flourishing friendship, but a life of menial jobs if not incarceration awaits most. 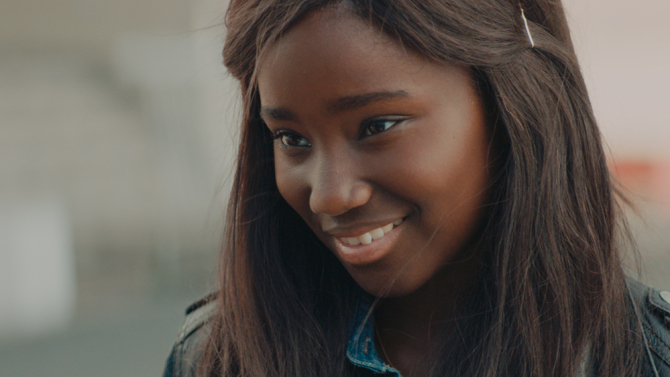