The documentary film ‘Coal Rush,’ winner of the Social Justice Award at the  2014’s Socially Relevant Film Festival in New York, arrives in the French capital. The film is featured at 2015’s Festival international du film d’environnement (Fife), that for 32 years has been focusing on movies dealing with environmental issues.

‘Coal Rush’ is a documentary made by Italian-born and American-adopted filmmakers Lorena Luciano and Filippo Piscopo. The story is set in rural West Virginia, where a community comes to believe that illnesses amongst inhabitants are caused by environmental wrongdoing. Locals sue Massey Energy coal company, because it’s contaminating the waters. Water, indeed is the protagonist of our story. It overwhelms us in our daily routine, from the minute we take a sip of tap water to the moment we take a shower. But for some people clean water can not be taken for granted. ‘Coal Rush’ underlines the paradox – through a single case – of the universal question that makes people wonder: How can we get cable and wifi in our homes but not necessarily clean water?

Furthermore the community of this story faces the dilemma of Jobs Vs. Health. West Virginia is the third poorest county in the USA (and second largest coal producing county), that is the reason why so many people in Rawl are grateful to work in coal mines. Coal is usually associated to the past, but as a matter of fact in the USA it provides for 50% electric energy and it is second only to China in consumption and manufacturing. This obviously creates serious geopolitical turmoil, if you consider that America has two hundred years of coal reservoirs and doesn’t have to rely on other countries’ resources. Therefore this documentary is enlightening, through a character-based report, on important contemporary issues that we tend to ignore.

But undoubtably, the most touching trait of ‘Coal Rush’ is that it somehow exemplifies a David & Goliath metaphor: a small community challenging a giant and succeeding. FLorena Luciano and Filippo Piscopo – through documentary – fix on film forever (just like Erin Brockovich did in fiction) a triumphant legal environmental battle, affecting the lives of many at the mercy of a colossal company. 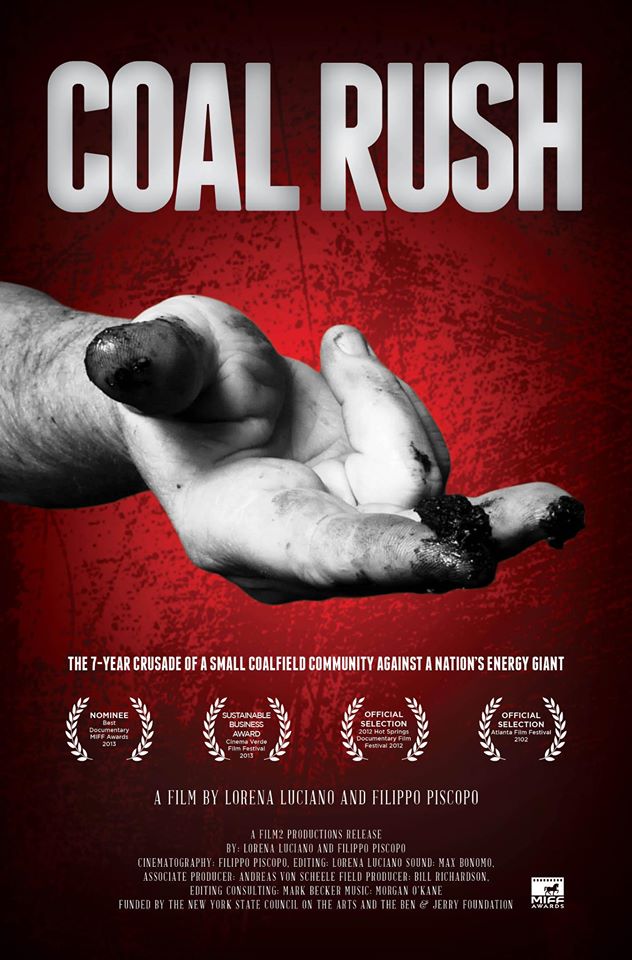