Americons is a cautionary tale based on a true story about the mortgage boom and economic collapse of 2008.  Jason Kelley (Beau Martin Williams) was a one time football star, now working as a club doorman. Walking up to the velvet rope is Devin Weiss ( Matt Funke), who recognizes Jason from his football days and asks him what happened to him that made him to be a doorman, y’know like an intensive rich boy c-sucker.  He gives Jason his business card and tells him he can help him become a millionaire in a year.  After his girlfriend forgets to pay Edison, Jason decides to take Devin up on his offer. Devin drops some knowledge on the real estate game with the Option ARM (Adjustable Rate Mortgages) loan, which the payer only has to worry about the lowest minimum of 1%. Jason is intrigued at the commission of these loans, so he’s all on board.    Jason even convinces another former player Theo Jones (Trai Byers)  to take out the loan, but flips out when Theo starts buying a whole bunch of baller crap when the money is in his account; apparently he forgot to tell his friend that the clients require a certain dollar amount in their accounts, not blow it all at once.  Devin then teaches Jason how to falsify bank statements to insure that the clients will get approved for these loans and leave their clients in the lurch later when they’ve taken their commissions. After several nights of gambling, drugs and other debaucheries, Jason realizes this whole loan thing is a scam and he needs to help his best friend from losing his house by using Devin’s shady tutelage to help his friend and save his conscience.

The Good:  Rich assholes getting their comeuppance…sorta. Sam McMurray was a badass. They needed more of his character. John Gries (Napoleon Dynamite’s Uncle Rico) as a pseudo-villain was fun.

The Bad:It plays out like a cheap rip-off of The Wolf of Wall Street. Why don’t we just watch that movie than this regurgitated story with less star power?  The actors should have done some research on drug use, because they’re doing blow and acting like it’s heroin. Cocaine is a stimulant, you don’t do some rails and then go to sleep.

The ending was eye-rolling-ly irritating and cheap. If I saw the guy that nearly ruined my life show up asking me if I wanted to make more money, I’d kick his ass and tell him to piss off. Why make us think that Jason would possibly consider it? We’re supposed to like this guy, not hate him for being a double sucker.

As a person of lower middle-class, I thought the plot of the film was going to be somewhat relatable. A guy in a similar monetary situation is supposed to fall for a get-rich-quick scheme and learn from his mistakes…that didn’t happen here. He looks like he’s dumb enough to fall for it again. I wanted a wise-man resolution and I didn’t get that. 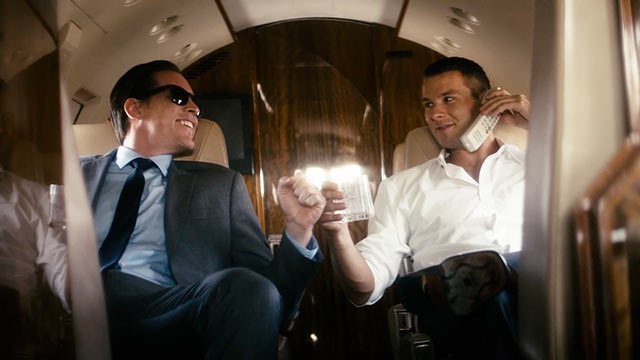