In the not-to-distant future, Steve Battier (Rutger Hauer), an elderly, terminally ill, multimillionaire. accepts an offer from the RPG company for an opportunity to be young again, but for only 10 hours.   He, along with 9 other elderly rich people agree to pay a hefty sum in order to play a game, but first they must choose a young body of any sex they want to represent them. The rules are to kill another player once every hour. If they fail, the game will choose who dies. They have their memories wiped of their original identities, and after each kill, they must pick the true identity from a hologram lineup of their older selves. If they choose right, the game continues. If they choose wrong, the killer dies as well. They can do whatever they want in this virtual world as their minds inhabit younger bodies. They can be young, beautiful, have sex, fight and kill without consequence; however they all want to be the last survivor in order to win the game.  Once the survivor leaves the game, is it possible to be young forever?

The Bad: The first sex scene was kind of hot, but their thrusting was poorly choreographed. Couldn’t they do some manscaping on the dude? I thought I was watching another Planet of the Apes installment. Some of the actors accents were too thick to really understand clearly, and more points against them – no subtitles provided. The film is called RPG which in the gaming world is an acronym for “Role Playing Game” but here the acronym is “Real Playing Game.” So how was it real? Did all these rich old farts really bite it when their young counterparts died in-game, or did they just lose their money and go home? They were lead to believe that they could remain young after the game was over, but per he ending, this wasn’t true. It was all in his head right? I didn’t really get it.  Supposedly it’s all fake, but they didn’t really cover what happened after they cleaned up the RPG center. The CG effects didn’t look finished in the scenes set in the ruins. A body gets burned when shoved into a wall, and the effect looked more like a placeholder for a better effect that never got done. All of their budget went into Rutger Hauer’s character scenes set in the future.

RPG is much like Battle Royale meets a take your pick virtual reality flick from the 90’s. It’s crafty enough lure the Hunger Games fandom while they wait for the final installment, but it’s got too many characters and not enough main character development to compete. I enjoyed it, but it feels like a cheap imitation of some better films. 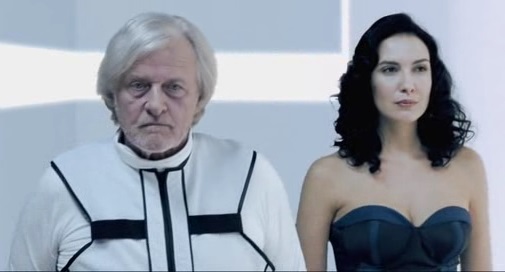