We secular folks without parohocial ties should try not to be smug.  There is much to be said for belonging to a group based on religion such as Haredis (Hasidim) or Amish, or what-have-you.  There is a feeling of togetherness that’s difficult to find among more urban, cosmopolitan people.  There is the paradoxical freedom in knowing exactly what is expected of you, what should constitute your life.  However some people born into such a group do not fit in.  In the vast majority of cases, they do not outwardly rebel, perhaps because the devil they know is the more appealing than the devil they do not.  This is what makes Meira (Israeli actress Hadas Yaron) so different.  Meira, known by her Jewish name Malka, is born into a Haredi family in Montreal, and unlike other women in her insular community does not want more than the one baby that she enjoys, a most unusual idea when having five, ten, even fourteen children is considered a mitzvah (a duty).

Her husband Shulem (Luzer Twersky) is frustrated by her behavior, particularly her listening to pop music when such is not considered kosher.  He feels put upon by having to justify her outlier behavior.  But she is drowning and, in fact, even teases her husband by playing dead, dropping down to the floor and holding her breath.  But she is going to get her chance to get a breath of fresh air when she meets a man, Félix, who is similarly an outsider, one who states that he does not know who he is, and who has been estranged for ten years from his now dying father.  When Félix and Meira meet in a Montreal bakery, there are no sparks.  Director Maxime Giroux makes sure to unfold the story slowly, casually, tentatively.  At first Meira does not have eye contact with this new stranger since that is prohibited to Haredi women except to their husbands, but gradually, as he opens her eyes to the world outside the community, she becomes emboldened all the more to break away from a life that is quite satisfactory and then some to a majority of Haredi women but not suitable for Meira.

“Félix et Meira” is unconventional to the extent that Giroux, directing from a screenplay that the 38-year-old Quebec filmmaker co-wrote with Alexandre Lafferière, would suddenly supply a black-and-white concert by a Black duet to a bopping white audience. Similarly the script calls for Félix to introduce Meira to a gypsy-style dance hall in Brooklyn in which two local comment that Félix “dances like a vacuum cleaner” and could use some lessons.

The movie, which closed the 2015 Jewish film festival, finds the black-sheep couple moving from Montreal to Williamsburg neighborhood in Brooklyn where Félix is confronted by Shulem, the outcome of their meeting to help determine whether Meira will make the break official and thereby be banned from the Haredi community in Montreal forever.  The deliberate pace may turn off fans of faster-moving pictures on similar themes like Boaz Yakin’s 1998 “The Price of Rubies,” in which a young Hasidic woman trained as a jeweler is married unhappily to a religious scholar, and Sidney Lumet’s “A Stranger Among Us,” in which a worldly, cynical cop goes undercover in the Hasidic community to investigate a murder.  There’s little of Hollywood in “Félix et Meira,” in which characters speak Yiddish, French and English, and that’s to its credit. 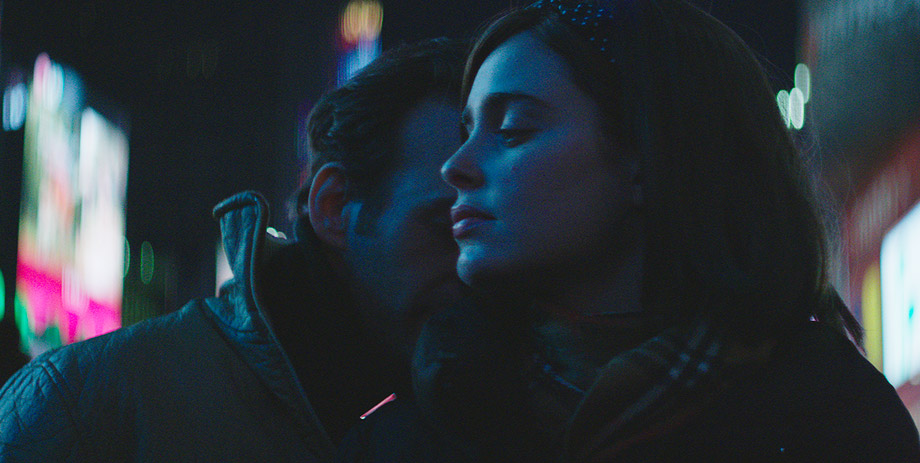