War movies come in all shapes and sizes. Some take place largely on the battlefield with many grand shootouts and conflicts depicted, and others spend their time away from the war itself in a more bureaucratic setting. And then there are those that stray from conventional formats and follow just one soldier through his harrowing experiences, whatever they may be. ’71, which has played successfully in the United Kingdom and now comes to Sundance in its Spotlight section, is a remarkably riveting account of one fateful day for a British soldier and his desperate efforts to survive through the night.

Private Hook (Jack O’Connell) is somewhat relieved when he learns that his unit is being sent not to Germany but instead to Northern Ireland in 1971, and assures his young son that he will be safe and will return soon before he departs with the regiment. A simple house check in a neighborhood close to a dangerous area results in an out-of-control attack on the soldiers, which leaves Hook alone and on the run from vengeful Provisional IRA thugs who have murdered another soldier and seek to track Hook down to see him suffer the same fate.

’71 is a dramatic thriller that refuses to let up, keeping its viewers on the edge of their seats as Hook makes his way through the treacherous city, sometimes just a few feet ahead of his pursuers and other times seemingly so close to freedom and safe haven. There is an intensity and a ferocity to Hook’s journey, and the constant threat of a deadly blow around any corner is deeply unsettling. Hook’s survival is far from a certainty, and it is impossible to know what the next few moments might bring

Belfant is an extremely volatile setting for this story, and one that works exceptionally well. Hook and his unit are briefed on the situation as soon as they arrive, after being assured that they are in better shape being sent somewhere within the kingdom than elsewhere in Europe or the world. The state of affairs in Belfast, with the IRA, Provisional IRA, and seedy undercover operatives confirms that it could not be further from the truth, and it is hard to know whether anyone outside the regiment can truly be trusted.

2014, when this film was released in the United Kingdom, was a banner breakout year for O’Connell. He has demonstrated an incomparable commitment to his roles with Starred Up and Unbroken, and here he manages to get beaten up multiple times and continues to fight while still bloody. Hook does not speak much and still feels pain and fear, which makes him an accessible and sympathetic protagonist, one whose situation no sane person would ever want to end up in. O’Connell has an extraordinary work ethic, and his future is sure to include dark roles and bright opportunities.

This film is most reminiscent of the Red Riding film series, which followed a corrupt police unit in three separate years with a different main character – a reporter, investigator, and a lawyer – in each entry. It is not simply because those films and this one share actors, but because of the grim, permanently foreboding feel that somehow still permits audiences to connect with the main character. ’71 is a brutal, stressful film, but one that makes it through without missing a beat or compromising any of its plot elements or themes. 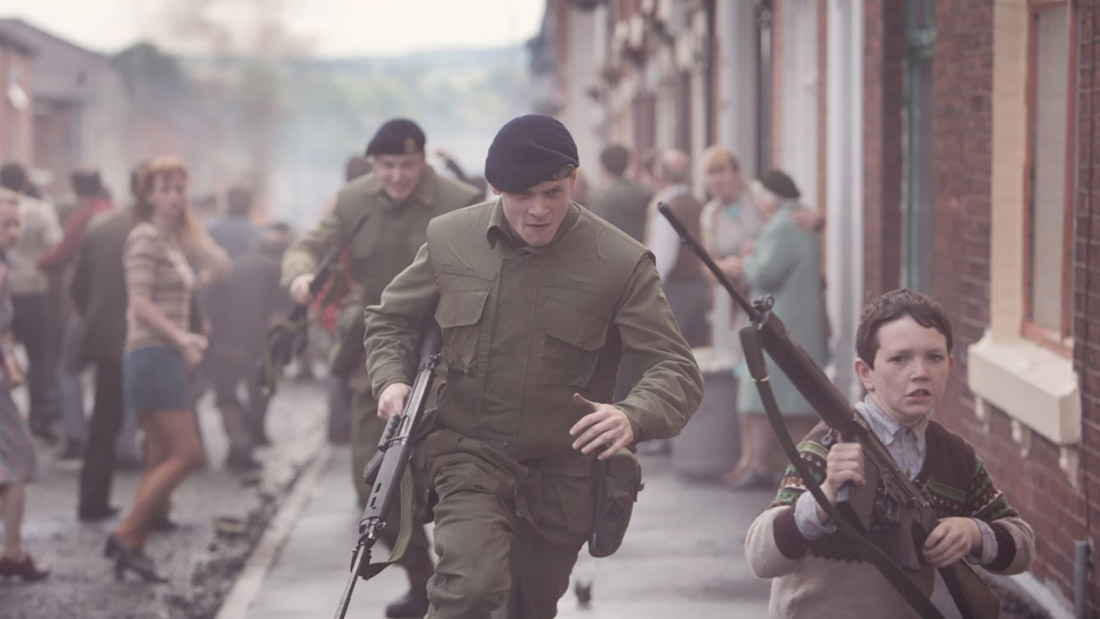