Keith Michaels (Hugh Grant) is an Oscar-winning Hollywood screenwriter who peaked with said screenplay over 10 years ago. Due to his track record of flops since, he can’t land a job in Hollywood anymore. Desperate and broke, he begs his agent Ellen (Caroline Aaron) to find him anything, and she manages to find him a job as a guest screenwriting professor at an upstate New York university. He thinks this will be a cush job that will pay the bills while he works on the sequel screenplay. When he first rolls into town, he meets a Lolita-type Karen (Bella Heathcote) who sleeps with him in order to get into his exclusive class. He goes through the pile of screenplays and only admits those who he finds attractive per the student directory; but he throws in two guys to not be so obvious.  One young male student he thinks is brilliant, and offers to take him under his wing and possibly a producer credit in order to get him signed. Holly (Marisa Tomei) an older student and single mom who didn’t make it into his class, finds out he didn’t even read her script and calls him out on it. He reads it and sees potential, so he adds her to the roll sheet. In order to fake his teaching ability, he keeps the students interested by making up a story that he’s working as a teacher to get some research for his new script, namedropping Matt Damon.

Before school starts, he is invited to a wine and cheese meet and greet with the faculty. He makes fast friends with professor Jim (Chris Elliot) with a habit of reciting Shakespeare, and the loveable department chairman/ex-navy seal Dr. Lerner (J.K. Simmons).  He makes a poor impression on the Jane Austen scholar Mary (Allison Janney) by insulting her passion, and he tries to get back in her favor. However he is unaware that she also happens to be on the ethics committee. When she discovers that Keith was having an affair with a student, she orders him to either quit quietly or have his name dragged in the mud with a hearing.  He chooses the former, and is crushed internally from the disappointed faces of his students.

On the way to pack, an ambulance has pulled up to a frat house, where Star Wars fanatic Billy (Andrew Keenan-Bolger) is brought out on a stretcher, a victim of hazing.  Keith follows Billy to the hospital and gives him the first encouraging words about his screenwriting ability and he realizes he cares for these kids and knows he make an impact if he bothers to make an effort.

The Good: The character development was like a dream. Every character was executed brilliantly by the cast. It’s a rom-com, but not the cookie-cutter kind. The story and characters are relatable, and surprisingly it doesn’t end in a kiss which was quite refreshing. I loved Grant’s character’s bit about not liking Jane Austen because he’s being tired of women empowerment, which may sound like misogyny but it’s not.

The Bad: The ending is predictable and cliche, though I still enjoyed it. Tomei was underutilized. There was much more to her character than what got screen time.

I was starting to wonder what happened to Hugh Grant. He or his people are realizing his appeal and age and I would highly encourage that they pick roles closer to this one. The dude has range, let him show the rest of us. Marissa Tomei is giving more Oscar deserving performances with her age and experience.  I liked the message that her character pressed that age isn’t a factor when it comes to doing what you love or still want to do with the years you have left.

Acting: A
Story: A
Technical: B
Total Rating: A-
Reviewed by: JM Willis 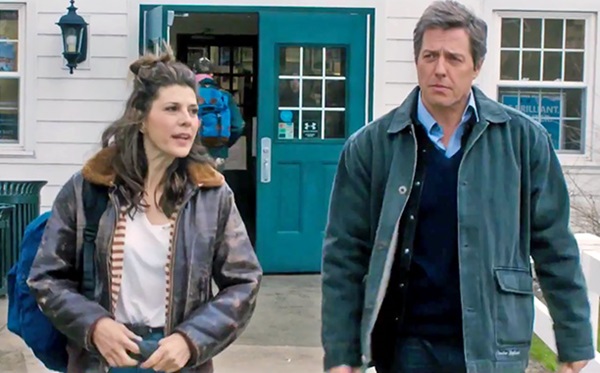