Zombieworld is film consisting of viginettes, each with a zombie theme.

Zombie News (directed by Jesse Baget) is intercut throughout the film where the sole survivors of the zombie attack in the KPRS newsroom are Marvin Gloatt (Bill Oberst Jr.) and his cameraman as they soldier on and report the news as Marvin slowly turns into a zombie.

Dark Times (directed by Peter Horn and Jared Marshall) plays out like the video game House of the Dead shot in POV form where the camera is the survivor who unsuccessfully evades the zombies and then becomes one.

Fist of Jesus (directed by David Muñoz & Adrián Cardona). Jesus Christ (Marc Velasco) raises Lazaro (Roger Sotera) from the dead, which doesn’t turn out like he planned when the man becomes a zombie. Somehow some cowboy zombies start wreaking havoc over Jerusalem, and it’s up to Jesus and Judas (Noé Blancafort) to save the day, killing zombies with whatever they can get their hands on – like fish.

How To Survive a Zombie Apocalypse (directed by Vedran Marjanovic Wekster) is a how-to video on the best way to kill zombies and safety tips.

I Am Lonely (directed by Phil Haine). *** (Matt Penderghast) is upset that his best friend Steve (Chris Spyrides) is dead and will soon become a zombie. He realizes he’s the last man in town left alive.

Dead Stop (directed by Tommy Woodward) Surveillance camera footage of a gas station as the survivors attempt to fuel up and fight off zombies.

Home (directed by Cameron McCulloch). A young woman (Jamie McDowell) is all alone at a farm house surrounded by zombies. She goes out daily to clean up and kill off what she can until the end of the last day where she puts on a wedding dress and jumps into a pit with the man she loved- – who is now a zombie.

Dead Rush (directed by Zach Ramelan). Much like Dark Times, it’s a POV film about a bunch of friends trying to drive out of town that is overrun with zombies.

Teleportal (directed by Paul Shrimpton). A young man (Aaron Daynes) playing a zombie video game is able to go inside the game via his television and play for real. Unfortunately his girlfriend (Charlotte Bulmer) picks up the control and thinks he’s an NPC.

Certified (directed by Luke Asa Guidici). A little girl (Rebecca Spicher) asks the new mailman (Thomas Garner) to wait inside while they wait for her aunt to come downstairs to sign for a certified letter. The little girl tells him a story about her aunt going insane after her father and uncle were killed in a mining accident.

Brutal Relax (directed by David Muñoz & Adrián Cardona) Olivares (Jose M. Angorrilla) is told by his doctor that he’s stressed and needs to find something to help him relax. He goes to the beach which gets attacked by sea-zombies. After his walkman breaks, he finds that killing zombies does a better job at helping him release some stress.

The Good: The special effects aren’t too hokey and the campy brutality is fun. The two shorts by the same filmmakers (Fist of Jesus and Brutal Relax) are Troma inspired gore-fest hilarity.  Home had no dialogue, but the acting was well done by Jamie McDowell.

The Bad: I Am Lonely is basically a ripoff of Shaun of the Dead, but shorter.  Dark Times and Dead Rush are almost the exact same film – which doesn’t make them bad, but they could’ve scrounged up something else that didn’t feel like déjà vu.  Teleportal was just amateur film school stupid. The special effects were cheesy and the premise felt like it was recycled from an episode of Are You Afraid of the Dark.

Zombies are so hot right now. With Zombieworld you get your horror, comedy and drama all in one film.  Some are worth watching, some you can take a bathroom break or skip over. 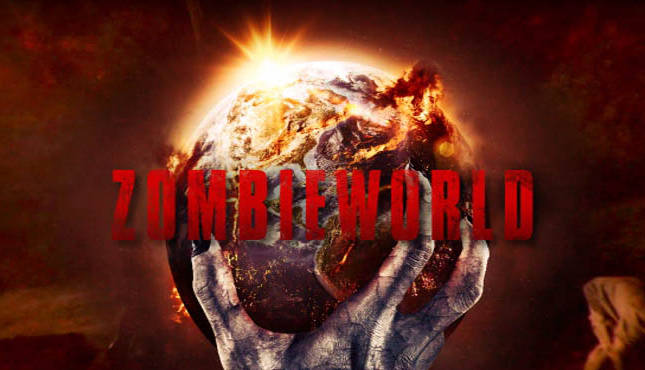