Did you ever wonder how rich guys have to be before they will hire bodyguards?  When Bill Gates is shown on TV, his bodyguards must be at a discreet distance away.  Surely he has a couple of them with him at all times, perhaps even more than President Obama enjoys.  Kidnapping becomes far too tempting for a rich or famous person to allow chance to govern his comings and goings. As an example, in 1983 one of the most famous kidnapping cases of all took place in the Netherlands involving a ransom payment of twenty-one million dollars (in Dutch guilders), requiring the bad guys to use all their muscle to lift four huge bags full of money.

In this situation, note that when your friend says “I’ll take a Heineken” during the Super Bowl game, he means something different from quintet of criminals who say the same thing.   Mr. Alfred “Freddy” Heineken, one of the richest men in the Netherlands worth over a billion dollars from bringing his sudsy brew out of the Dutch borders and into the world, was the target of a group of young men who had run out of money and were unable to get a bank loan.  They show their mettle by physically throwing out a group of squatters from a building they own.  The two principals who get most of director Daniel Alfredson’s time are Willem Holleeder (Sam Worthington) and Cor Van Hout (Jim Sturgess), their followers being Jan “Cat” Boellard (Ryan Kwanten), Frans “Spikes” Meijer (Mark Van Eeuwen), and Martin “Brakes” Erkamps (Thomas Cocquerel).

You can tell early-on that their heist would come to naught despite the two years’ planning of the event since they frequently argue with one another and because Cor Van Hout, a family man, could give away the prize rather than escape successfully abroad as he becomes so homesick that he will call his wife, giving her the phone number of the hideaway.  And the hideaway is quite a professional job.  Calling it an “Anne Frank” refuge, one of the men built two soundproof chambers with hidden doors inside a Quonset hut, chaining Freddy Heineken (Anthony Hopkins) to the wall, his chauffeur, Ab Doderer (David Dencik) in the other room.  While they wait impatiently for three weeks for the ransom to come through, they argue, more two one of the kidnappers suggesting that they release the men and call it a day.

The film could have been longer, since the arrests that conclude the episode seem to come out of nowhere.  In one case, according to the epilogue, the police were tipped off, but to this day nobody knows who ratted the guys out.  Alfredson, using William Brookfield’s screenplay and a journalistic series by reporter Peter de Vries, does present psychological differences between the two leaders, pitting the family man with his vulnerable homesickness against the more steely makeup of the other.  Ultimately, “Kidnapping Mr. Heineken” is fast-moving, involving throughout, giving Anthony Hopkins a relatively minor role but punctuating his emotional deterioration from the stress of captivity in a single room for a month.

Purists will sniff at the fact that everyone speaks English though we know that Dutch is the language of choice in Holland, and that the streets of Amsterdam appear empty of pedestrians and vehicles alike.

The Swedish director is known largely for “The Girl Who Kicked the Hornets’ Nest,” an adaptation of part of William Stieg’s trilogy, a fellow who may have been inspired to make the film because of the success of Martin Treurniet’s 2011 film “The Heineken Kidnapping, which in turn emerged from the 1987 book by journalist Peter R. de Vries’ “The Kidnapping of Alfred Heineken.” 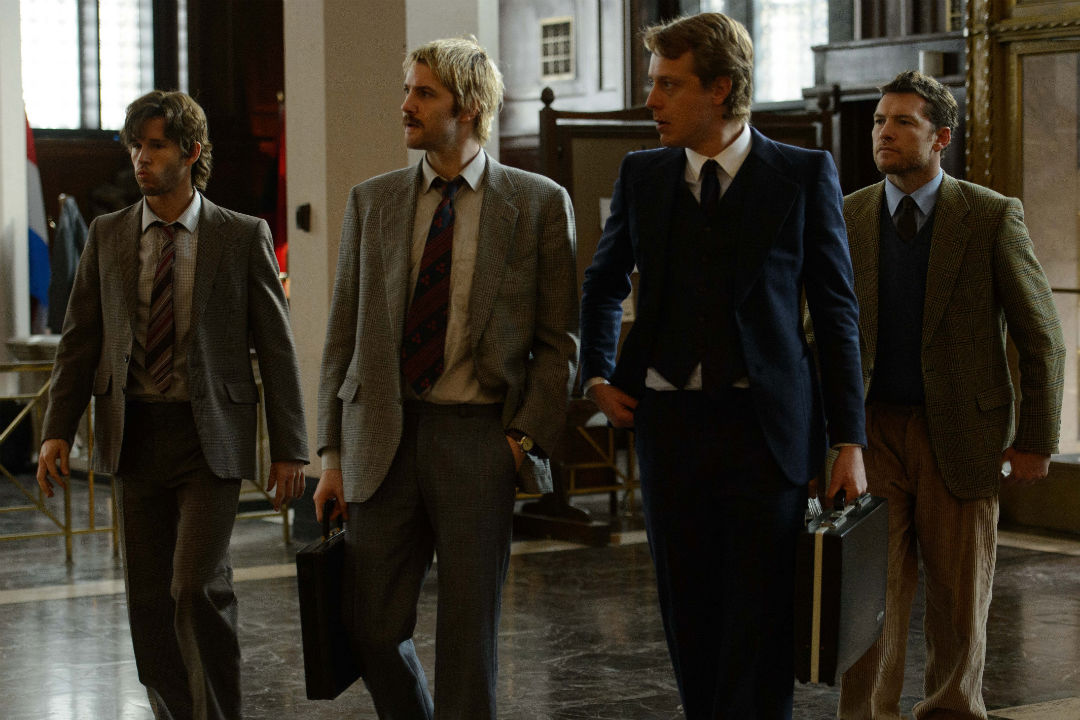