In Edward Albee’s play “Who’s Afraid of Virginia Woolf,” George and Martha entertain a much younger couple, Nick and Honey.  In discussing their merits and their appeal to women, George states “I have history on my side,” while Nick counters with “I have biology.”  Reductive as this may be, a similar theme is on display in Eugène Green’s “La Sapienza,” or “Sapience.”  Green, not well known in North America, is a U.S. born, France-naturalized filmmaker and educator prominent for teaching French baroque film styles to his students and whose 2009 film “La Religieuse portugaise” deals with a young French actress in Lisbon to shoot a movie is intrigued by a nun she sees kneeling in the in the chapel where she is filming.  What that film has in common with “La Sapienza” is the French baroque style of presentation, which is a 17th century method juxtaposing contrasting events to create movement and tension and which uses ornate ornamentation characteristic of that baroque era.  (In a related theatrical form, the French neo-classicism of the 1600’s, featured actors facing the audience instead of one another and making declamations.  In a modified form, this is in use in “La Sapienza”).

While a potential audience unused to such stylization may be put off by a robotic delivery from the four principal performers, when one gets accustomed to the pace, the frequent close-ups, the long takes, the viewer can appreciate the ways that “La Sapienza” is far different from mainstream attractions and even from the bulk of indies.

Two ideas are covered by the 67-year-old Green, who has a small role in the film.  One finds the influence of a young man and his younger sister on a middle-aged couple with a dried-up marriage (biology), while the older man, an architect, and his wife, a social psychologist, change the lives of the younger pair (history).   Interspersed within the human drama is a narrative documentary about architecture, particularly the need to preserve beautiful, ornamental forms versus soul-killing, contemporary, functional building.

Alexandre Schmidt (Fabrizio Rongione), a French architect, disgusted with the failure of a city planning commission to adopt his ideas of beauty in favor of functionality, takes a leave in Italy to study.  His wife Aliénor Schmidt (Christelle Prot Landman) joins him—though they barely communicate on an emotional level.  The couple meet another pair in Italy, Goffredo (Ludovico Succio), an eighteen-year-old about to study architecture, and Goffredo’s younger sister, Lavinia (Arianna Nastro), a fragile teen subject to dizzy spells that land her in bed for several days each month.  While Alexandre spends several days mentoring the student with an extended narration in Stresa on the architecture of Francesco Borromini—marveling at the works on churches and palaces, and spending considering film time elaborating on 17th century architecture–Aliénor psyches out and mentors Lavinia, determining that her vertigo is prompted by guilt over her unnatural attraction to her brother.

Each couple changes the other duo—as they say—forever.  Aliénor will grow closer to Alexandre, reviving their more passionate days.  Lavinia will determine to grow some distance from her brother.  The film juxtaposes the documentary-style narration about the need for beauty vs. functionality in buildings with the romantic theme involving the middle-aged couple.  Humor is sparse but quite effective in its suddenness, as when an “ugly Australian” tourist from Sydney demands that a watchman open the door to a church though the key is not currently available.  All four people “find the light,” an expression used metaphorically to good effect.

Original that this film may be, it does recall Roberto Rossellini’s 1954 “Journey to Italy” starring Ingrid Bergman and George Sanders, about a workaholic businessman and his more sensitive wife whose journey recalls memories of a poet friend, Charles Lewington.  On the brink of divorce, the couple are saved after a visit to Pompeii when a religious procession in Naples rekindles their love.  As with that classic movie, the landscape scenes in “La Sapienza” will rekindle your desire to go to Italy—tomorrow. 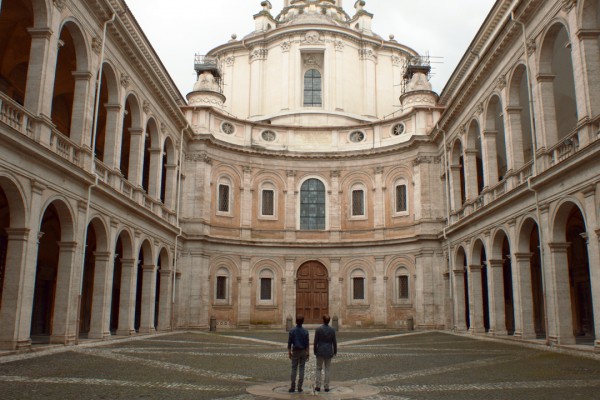