With so many zombie films and tv shows going on, there was bound to be a filmed parody.  The filmmakers here took elements of The Walking Dead, World War Z, Warm Bodies, Dawn of the Dead, Zombie Strippers, Zombieland, as well as and bits and pieces of a few others and mashed them all together in one film. Sheriff Lincoln (Dave Sheridan) wakes up from his coma in an abandoned hospital and meets two guys named Chicago (Joey Oglesby) and Green Bay (Troy Ogletree) whom are scouting the hospital for supplies. They take Lincoln back to their sanctuary which happens to be an abandoned mall with some other survivors. One girl has the hots for Romeo whom is a zombie, but doesn’t let on that he is one.  Somewhere along the way, Lincoln finds his son Carl Chris running a strip joint made up of mostly chained zombie strippers and his mother who’s the headliner…she gets killed by Carl Chris because she gets shot in the boob.  The group decides to leave the mall and they find an old couple’s farmhouse where they are welcomed in, but are warned to stay away from their daughter. Is she a zombie? What’s the deal? Romeo starts showing human emotions but he’s not exactly cured. The group finally discovers the cure (it’s water) and they all live happily ever after.

The Good: When we are introduced to Sheriff Lincoln he yells out “CARL!” That got the only laugh from me; I was expecting it, but it was still pretty funny.  Wait, I take that back. There was one other line that I laughed at and it was the “one-tit stripper” line from Carl Chris. The makeup effects were decent for semi-low budget. Oglesby and Ogletree (dudes are you brother-cousins? What’s up with that?) do some good impersonations of Woody Harrelson and Jesse Eisenberg.

The Bad: With the amount of zombie films these guys try to lampoon, you would think they could do something actually funny with the material. Curing the zombie virus with water? Derp. Way to rip off Shyamalan in one of the dumbest ways possible. Too many wooden characters to keep track of. The large cast only works when you’ve got good character development. This was just just a crowded mess. They couldn’t keep the pseudo-Daryl character, they had to kill him off in a dumb way. The dialogue seemed made up on the spot, and most of the actors were not good at ad-libbing. There were tons of long pauses where they obviously didn’t know what to say or what they were doing.  The outtakes during the credits weren’t even funny.

The Carl joke was funny ONCE…when they kept running with it, it got stupid real quick, much like the rest of the film. It could have been really funny if they hired a writer or had an actual story with a plot or ending. It’s a spoof, you can’t just phone it in with some tits and call it a day. 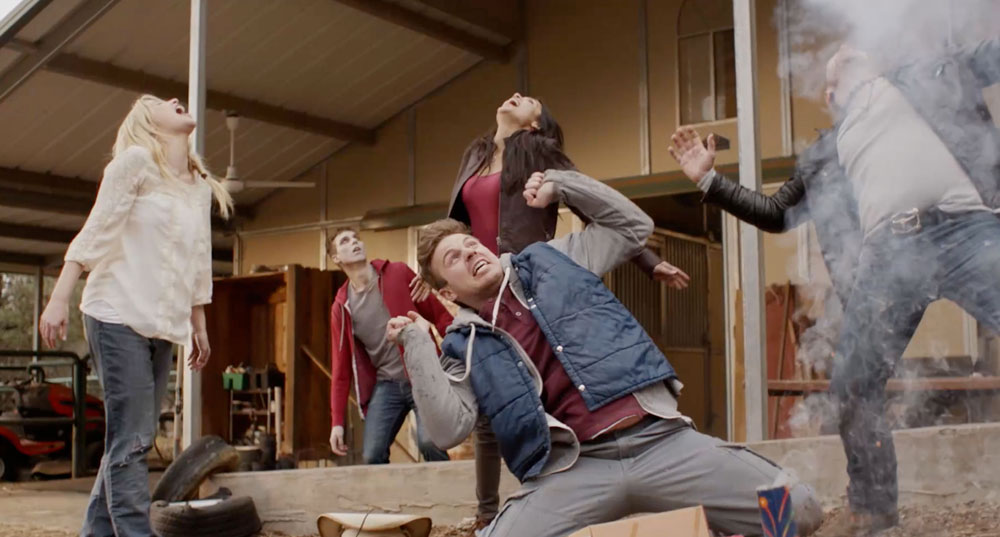