A group of friends in Britain are bored and want to go out clubbing. Little do they know is that a zombie virus is spreading amongst the living. Pretty soon they are all running for their lives as the zombie uprising is upon them. They and a few survivors show up to an emergency rescue center and hide out until their resources dry up, then they start to turn on one another.

The Good: Some of the gore effects were solid.

The Bad: The DVD case says this is 120 minutes, but it felt like 4 hours. The beginning was a little dialogue heavy, but still strong. As soon as the survivors found each other, the film began to drag its dying carcass and took us along with it. You really can’t make a zombie film like this anymore, now that there are actual characters with back-stories and a plot with an ending. What were they trying to do here?

I walked away to put away dishes, take the dog out and came back to the film still going and still sucking. I didn’t miss a thing because it was so damn redundant. This film was made in 2013 and is now seeing the light of day? If they felt it needed a release, they could’ve just quietly placed it on a shelf and walked away. I didn’t care about any of these characters or if they survived. They kept killing off random people that they went to the trouble to introduce, so it really didn’t matter.  Then it just kind of ended. Seriously, WTF was the point?

My 15 year old stepdaughter walked in and watched for about 5 minutes before getting bored with it. “Why are they running?” She asked about the zombies. “Zombies don’t run, it would be physically impossible because the dead’s muscle mass would be depleting.” I’m proud to call her my kid. The filmmakers don’t take into account that audiences are getting smarter. You can’t pull off suspension of disbelief anymore.

The Infected started out like The Inbetweeners in Zombieland, but it went downhill fast. If they stuck with a comedy horror angle, it may have actually done better. The zombie horror is almost done to death – no pun intended…well, this film could’ve done with some puns. I would say pass. I was bored out of my gourd. 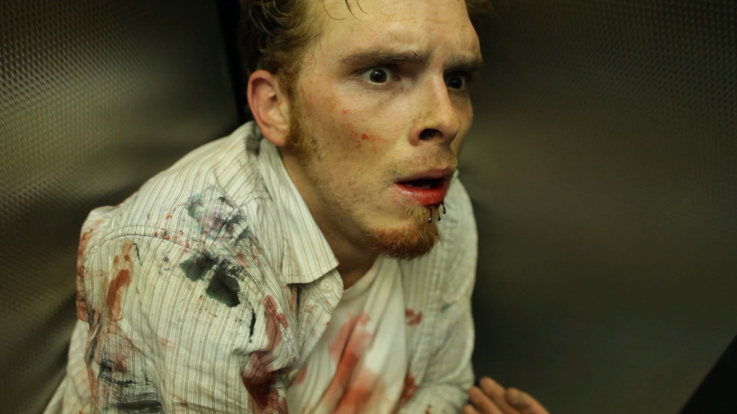