Nice guy Max (Anton Yelchin) has a beautiful, yet clingy girlfriend Evelyn (Ashley Greene). They seem to love each other and she goes along with his quirky interests, which brings him to take the next step in asking her to move in with him. She immediately turns into the girlfriend from hell by controlling his every move and threatening other women that harmlessly flirt with Max. She redecorates the apartment to function as an environmentally friendly one, and destroys his prized foreign movie posters. He stops by his best friend Travis (Oliver Cooper) whom convinces Max to break up with Evelyn. Max wants to break up in a safe environment because he wants to avoid a scene or injury, so he calls Evelyn to meet him at the dog park. Thinking he bought her a puppy, she rushes over and in her excitement, steps in front of a bus and dies.  Feeling responsible for Evelyn’s death, Max goes into a deep depression after the funeral.  Travis stops by and convinces Max to get back out in the world. He was going to break up with Evelyn anyway, so he shouldn’t feel so bad for his ex dying. He concedes and goes to a horror movie, meeting a girl named Olivia (Alexandra Daddario) who runs an ice cream shop catered to horror buffs and hipsters. They have an instant attraction and he invites her back to his place…little did they know that an artifact at his work cast a spell on his relationship with Evelyn, causing her to come back from the dead and show up at Max’s apartment.

The Good:  Simple story, funny dialogue, interesting characters.  There’s a scene where Evelyn barfs embalming fluid onto Max, and it’s awesome and hysterical. If you stay to the end, you’ll see a quick outtake of that scene.

The Bad: The ending was kind of a rip-off of Shaun of the Dead. The character development was a little lacking. Max is such a wuss character, you kind of stop caring about him. Travis was more interesting, but he gives off that vibe that he represents the writer; and you know he’s not going to get killed off, just get a little bit eff’d up and still be awesome. Once it was established that Evelyn was kind of evil, there was a mad dash to ending without really fleshing out the story.  These characters are way to young to know what Fruit Brute tasted like, unless they’re going by the limited release from 2013. This kind of pop-culture reference feels like pandering to my generation.

A few critics are complaining that this film is a step down for Joe Dante, but it’s quirky and fun. The Zombie genre is getting old, and writers are struggling to make it new again. Making horror funny and not silly is tricky. If you want to be entertained, you will get your money’s worth, but honestly I would wait for the DVD. 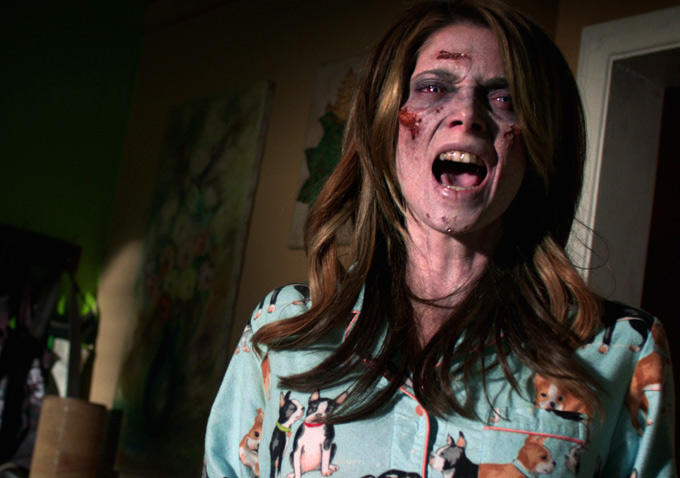