Samuel L. Jackson is U.S. Presdient  William Alan Moore whom is flying on Air Force One on his way to a summit in Helsinki Finland with his secret service. Morris (Ray Stevenson), head of the secret service is on his last journey; forced to retire after a debilitating gunshot wound he sustained while protecting President Moore. Little does anyone know, he is working with a known terrorist who plans on shooting down Air Force One and hunting the president down once his escape pod lands.  On the ground is a young lad named Oskari (Onni Tommila) whom is on a very special hunting trip with his father and his club of fellow hunters.  This hunting expedition is supposed to prove to the rest of the men that Oskari is no longer a boy and fit to join them and have his portrait on their wall of victors. Unfortunately Oskari chokes on his initiation, though his father Tapio (Jorma Tommila) convinces the leader to still allow his son to hunt. Oskari revs up his ATV and ventures alone into the woods to hunt down game worthy enough for the club.  The president’s escape pod happens to crash land near Oskari, and when he finds out whom is in the pod, takes it upon himself to escort the President to safety.  Meanwhile Morris and the terrorists are hot on their trail and will stop at nothing to hunt them both down.

The Good: That looks like the little kid from Rare Exports…wait a minute, that is the kid from Rare Exports! Holy shit, did they find the fountain of youth in Finland? Jim Broadbent as a badass? Did we just go to bizarro world? I was so not expecting that, but it was pretty damn cool.  The cinematography and locations are outstanding.

The Bad: They censored out Samuel L. Jackson’s trademark “Motherf—er” line. Are you insane? Boo! Hiss! Shenanigans! PG13 is allowed to have one f-bomb and I can’t even remember if one was even uttered. Give the man his trademark.  There’s a shit-ton of sap in this unnecessarily kid friendly action flick. The obviously photoshopped pic of the kid and the president on the victory wall was so incredibly lame.  It’s about damn  time Samuel L. Jackson gets to play the president, but I don’t like how weak they made him. Harrison Ford at least could kick some ass in Air Force One, and he’s like 70-something. Jackson as president didn’t have to be ex-military, but he didn’t need his ass handed to him so many times.  Superfluous casting. Felicity Huffman didn’t add anything to the story, neither did Ted Levine, but I like his voice so he gets a pass.

Big Game is a total mash-up/rip-off of Air Force One, Broken Arrow, and Cliffhanger. It’s a total popcorn flick. You will be entertained, regardless of how many times the president and the kid cheat death and you’re yelling “bullshit” at the screen.

Acting: B-
Story: C
Technical: B
Total Rating: B- 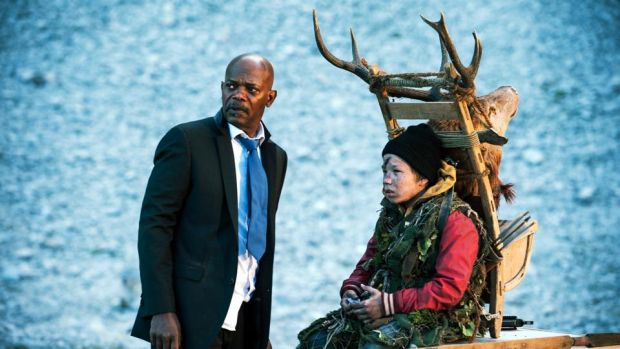