Bud Gordon (Corey Stoll), is a former boxer turned trainer. His fans will never let him live down the night “The Saint” got knocked down in the 5th round. He lives in a “cozy” apartment with his girlfriend Ellen (Marin Ireland). She wants to have a baby, but he doesn’t want to hear her talk about it.  He’s disappointed that she has to work menial jobs and they no longer live in an upscale place since he stopped fighting.  He starts working for a loan shark named  J.J. (Billy Crudup), just as he’s starting to see the brighter side of his troubled life. J.J. wants him to seek out some debtors and shake them up, and in return help Bud get his restaurant back in business so his girlfriend won’t have to take diner jobs and move his gym to Manhattan so he can get some more upscale clientele.  It’s not his dream job, but it’s work. However the fit hist the shan when one of the debtors ends up dead after one of his late night visits, J.J. threatens to blame Bud for the murder if his boxer doesn’t throw the fight.

The Good: The chemistry between Corey Stoll and Marin Ireland was good and their banter seemed natural for a couple.  The one part that had me laugh out loud is when Bud takes a yellow cassette player out of his pocket and J.J. exclaims, “Is that a walkman?”

The Bad: Zzzzzzzzzzzzzzzzzzzzzzzzzzzzzzzzzzzzzzzzzzzz….This movie is all dialogue and the delivery is bored and monotone. The characters are not at all interesting in order for me as the viewer to follow along with the story.  The only part that sort of peaked my interest is when when the tag-along goon picks up David Johansen’s diabetic cat and threatens to kill it. Screenwriters and directors are finally getting that killing the animals does not help the story, unless you’re redoing Marley and Me or Fatal Attraction. What bothered me most is the fact they build up the backstory of the failed boxer, training an up and comer and doesn’t even deliver an actual match. What kind of b.s. is that? I’m not even a real boxing fan, but give us something other than some old-timey type sports radio commentary. What year is this?

Glass Chin seems to be a bit confused as to what type of film writer/director Buschel wants it to be. Is it a gangster story or a retired boxer passing the torch to the young hopeful? It tries to be both, and it doesn’t really work.  You can have the dialogue, but have something going on. This might’ve worked out better as a stage play if you were going to give all your characters epic monologues and soliloquies, and not have anything visually compelling happen. 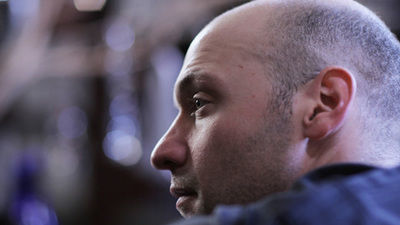