When President George W. Bush launched a war with Afghanistan soon after the tragedy of 9/11—when terrorists killed 3,000 Americans by crashing a plane into the World Trade Center’s Twin Towers—he thought he would defeat the enemy by taking away their training grounds.  He should have realized that radical Islamists could easily regroup elsewhere as they have—in Yemen, in the wild reaches of North Waziristan on the Pakistan-Afghan border, even here in the United States where several terrorist actions have been attempted.  While neo-Nazi groups are not Islamic terrorists, they represent a similar extreme force operating, surprisingly, within the laws of the U.S. and the several states.  Many of these groups have training grounds in Oregon, but Michael Beach Nichols and Christopher K. Walker show us one small faction which, having been thrown out of European countries for their extreme provocations, have situated themselves in the rural town of Leith, North Dakota, population 24.   (The hamlet is named after a harbor town in Edinburgh, Scotland.) One Craig Cobb, who comes across at first as simply a cantankerous old man, buys a rickety wooden house without sewage or running water, then picks up other properties in this abandoned town with the aim of moving in fellow Fascists, taking over the government, and pressuring the normal inhabitants to leave.  His goal is to set up a paradise of hate groups in which to plan and operate under their paranoid notion that American white people need a group like the Klan to defend their interests against blacks, Indians, and other minorities.

As the riveting documentary progresses, we get the notion that the Bill of Rights, specifically the First Amendment guaranteeing freedom of speech and assembly, is being used to subvert our values rather than enhance them.  Nonetheless those who are absolutists on this section of the Constitution say that people we agree with do not particularly need those protections: the Constitution is designed to give freedoms to the most loathsome people.

But I’ll wager that most people in the audience would like to jail Craig Cobb and his cronies and throw away the key, the First Amendment be damned.  How would you like it if some new people moved into your community, set out flags with swastikas, and engaged in such friction with the town mayor and all of its inhabitants including the one black fellow?  The problem here is that there is no major crime to convict him of, though when he and his right-hand man went patrolling around the neighborhood with rifles at the ready, the folks became fearful, especially after an incident in Kansas City Missouri when extremists shot up a Jewish center.

Somehow—and this is not entirely convincing—the prosecutor came upon grounds to arrest these men, forcing them into a plea bargain, but one which would not result in any additional jail time. Cobb, who is far from an idiot but instead speaks like a man of high education, appears near the conclusion of the doc with a new haircut, bearing a thick book about a “new religion,” and, like David Duke, has not mellowed a bit in his old age.  Nor is Cobb or the movie without humor. Appealing on a talk show, Cobb is kidded when, after submitting his DNA, is told that his 86% European and 14% African!  “You’re a black man,” jokes a hostess, and Cobb has the sense of humor to smile broadly.

That directors Nichols and Walker are able to accumulate considerable file film, thanks in part to Cobb’s willingness to talk and talk, is next to amazing.  “Welcome to Leith” comes across more as a narrative than a documentary—and that’s quite a compliment. 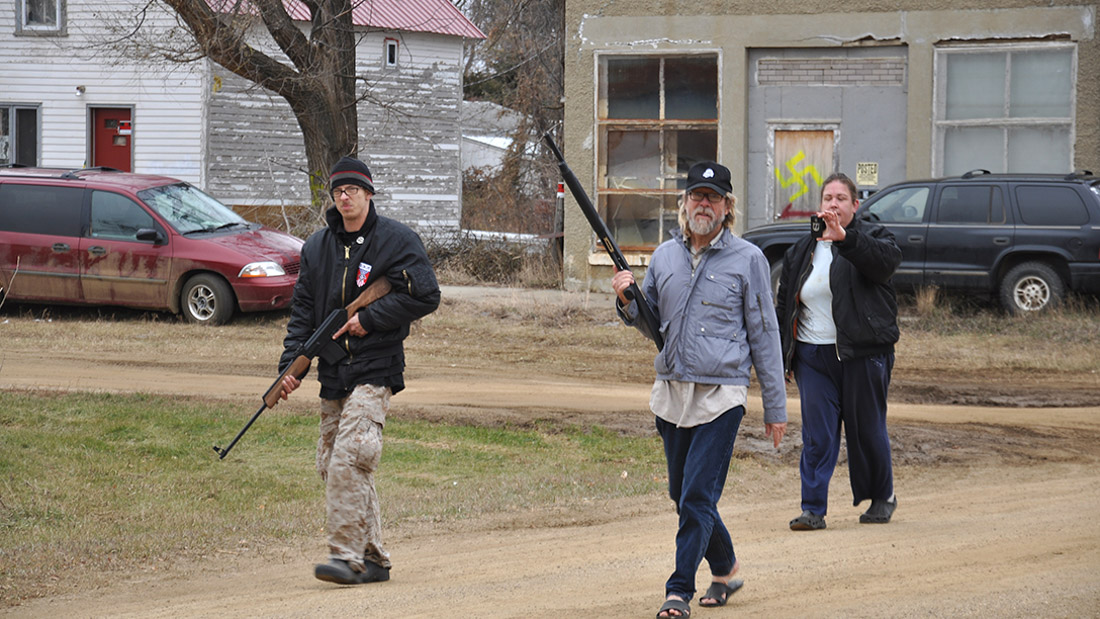