Just sit right back as this two disc documentary takes you through the Friday the 13th franchise of 12 films (including a reboot). The brainchild of producer Sean S. Cunningham, he doesn’t hold back when he admits he wanted to rip off John Carpenter’s Halloween because of it’s astounding success.  He didn’t have a script yet, just a title when he took out an ad in Variety. Narrated by Corey Feldman, we get to hear the cast and crew regaling stories of the process, good and bad of each film. No matter how terrible the script, the franchise still keeps its cult following.  Some of the cast members have never done anything else, and still think being a victim in their film was the highlight of their career.

The Good: There are some great interviews with Betsy Palmer,  and several other cast and crew who are no longer with us, including recently Wes Craven.  Erin Gray from Jason Goes to Hell is a good sport, even though she had a major issue when the filmmakers decided to  slip in that demon worm up her cooter  without her knowledge. The special effects are truly the star in these films. No matter how hokey they got, there were some real breakthroughs and brilliant make-up effects when funding was tight. I liked how each cast member was interviewed with a screenshot of their film death behind them. It gives the fans a little “A-ha moment” when they can’t exactly place the actor. Harry Manfredini telling how he came up with the infamous killer anthem was brilliant. He took Betsy Palmer’s scene where she says “Kill her Mommy,” and just took the first syllables of Kill and Mommy and put it into an Echoplex device…the rest is history.

The Bad: They kept interviewing Tom Savini with each film in the franchise, but he only worked on the original film and the fourth film  The Final Chapter. I have a major beef with him because he killed a live snake for effect in the first movie; this documentary barely covers it.   There’s no doubt he’s good at what he does, but what a dick move. Who is that dead eyed blonde sitting next to Corey Feldman in the intro?  Most of those “kids” sitting with Feldman look like they were cast by the same people from the original 90210. Oh yeah, these 30-40 year olds will pass for teenagers. Having a commentary on a documentary is really odd. I think it would’ve been better had they just filmed a sit-down with Director Daniel Farrands, Writer Peter Bracke and Editor Luke Rafalowski.

I kind of have a love-hate thing with the Friday the 13th franchise. I was only 3 when the original came out, so I wasn’t in the same league as the O.G. fans. When I was old enough to watch them, I thought the make-up effects were corny. A few years ago I live-tweeted a marathon of the films and I can see how it gained such a following: it’s got bare boobs, sex and gore. Never mind the plothole ridden scripts, the gore effects coupled with T&A and anticipating a ridiculous body count makes the experience such a good time. You would think the whole premise would get old, but they still manage to make it fresh and fun…but to get the ideal experience, it’s best to watch in large groups.

Acting: D (for the intro and outro)
Story: N/A
Technical: A
Total Rating: B 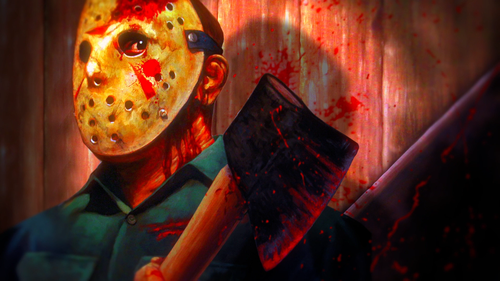 Cancel reply
The Martian Gets New TV Spots
New York Film Festival 2015: The Assassin Gets A New Clip
To Top