Beasts of No Nation Movie Review

The key argument made, one that led to America’s adoption of the 26th Amendment forbidding states to deny the right to vote to citizens 18 years of age and older, came out of the Vietnam War protests.  The point was: if you’re old enough to fight and perhaps die for your country, you’re old enough to vote. This sounds sentimental and patriotic but does not stand up to cold logic.  During the Civil War, ten-year-olds were found in battle.  Johnny Clem, as much a hero to his age group as Ulysses S. Grant was to the Union army, was ten years old when he joined the Michigan Regiment and shot dead a Southern Colonel.  Johnny Clem was old enough to fight and die, but did that make him old enough to vote?  What about the child soldiers in a number of recent and current wars in Africa?  In the “Democratic” Republic of the Congo, for example, thirteen-year-olds were recruited forcefully as rebels to fight against that country’s army.  Should they vote?  Hardly.

But boy can they fight.  In “Beasts of No Nation, director, producer and writer Joji Fukunana (whose “Sin Nombre” deals with Central Americans who hunger for better lives)—filming in Eastern Ghana where a lack of structure in the country led to actors disappearing and crew members demanding more pay—takes us on a brutal journey seen from a 13-year-old’s point of view.  If you’re looking for clarity as to why at least two rebel forces are fighting against the government while avoiding capture by Nigerians under the U.N. flag, you won’t get much.  All we know is that a rebel leader known as Commandant (Idris Elba, the only “name” actor in the show) motivates his forces by claiming that the government was stealing their land.  Like rebels romanticized in the Che Guevara mode, these ragtag units hide out in the mountains and forests of an unnamed African nation (filmed in Koforidua and Ezile Bay at Akwidaa, in coastal Ghana). When they come upon villages occupied by the regular army they fire wildly into the crowds, throwing grenades, and trying to stay alive while threatened with automatic rifle fire and bazookas.

All is seen through the eyes of Agu (Abraham Attah), the movie’s star, whose parents are killed by unknown forces and who is recruited by Commandant with the lie that the government was responsible to his parents’ death.  Having run away from his happy life horsing around with his friends, selling junk like a TV set without a screen (the kids perform in front of the blank screen area as though to prove that the TV was working), he is caught by Commandant and his forces and trained to be a fighter.  His initiation consists of killing a man tied up and on his knees by using a machete, inflicting two deep gashes on his head, then hacking away on the body with other underage fighters.  This is just one sample of the violence that might turn away some potential audience members, though a sexual encounter between Commandant and an unwilling thirteen-year-old boy is merely hinted at as though violence is OK but pederasty is out-of-bounds.

Having played at festival premieres in Venice, Telluride and Toronto, “Beasts of No Nation” at the cost of just six million dollars is able to outfit scores of soldiers and rebels, the director’s taking full advantage of the acting skills of London-born Idris Elba. (Elba’s father is from Sierra Leone and mother from Ghana.) As Commandant, Elba adopts a wide range of performance skills including comic touches, and is best seen as a charismatic leader whose regular motivating speeches keeps his rebels intact—until they run out of food and money.  Young Abraham Attah, who appears this year in Jonathan Stein’s “Out of the Village” (about a brother and sister caught in the West African Ebola epidemic), already shows great talent whether smiling and laughing in the early scenes and acting a confused and ultimately centered adult role as a rebel fighter.  He is particularly adept when bonding with the mute Strika (Emmanuel Nii Adom Quaye), another kid favorite of Commandant.

Ghanese citizens might be insulted that the film implies that their country is involved in a civil war, but the paradox is that Ghana, being a peaceful, stable nation, is counted on to provide calm and stability during the filming of this important, if overlong, film. 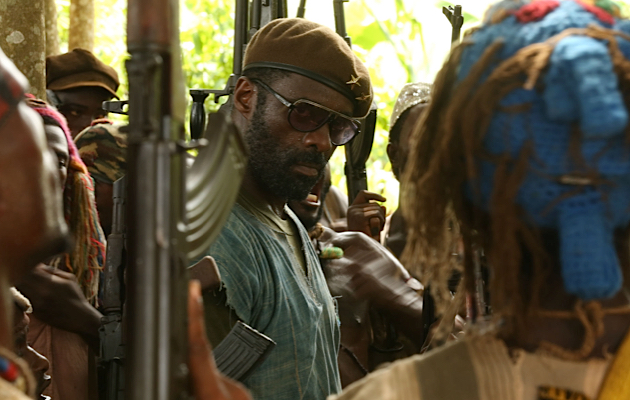