Want to see Malcolm X rap battle the Klu Klux Klan? Well, Virus got your back!

Last Friday, Virus put on a Battle Rap Extravaganza with FilmOn and Dizaster Entertainment. We saw the likes of rapper Cadalack Ron as a Klan member battling against Daylyt as Malcolm X, as well as Caitlyn Jenner, played by transgender rapper No Shame, against Bruce Jenner look-a-alike, Rone. Other battles included, AClass as Bruce Lee vs. Bill Collector as Kareem Abdul Jabar, The Deadman as 50 Cent facing off against Marv Won as Rick Ross.

The event was part of a livestream on FilmOn, the world’s number one free TV service and number one live TV app with 40 million downloads and from Greek billionaire Alki David. The winner of the rap battle received YouTube royalties from the livestream.

“Even though they’re probably gonna say some fucked up shit to each other, I’m hoping that it can have a positive result in the end, ” Dizaster said in a press release.

FilmOn and ETV have produced successful Battle Rap extravaganzas and events, such as Ether at the Belasco Theater in Los Angeles. This event brought Cassidy out of retirement to face Dizaster, which was sold out both at the theater and via pay-per-view, so you know it was dope! 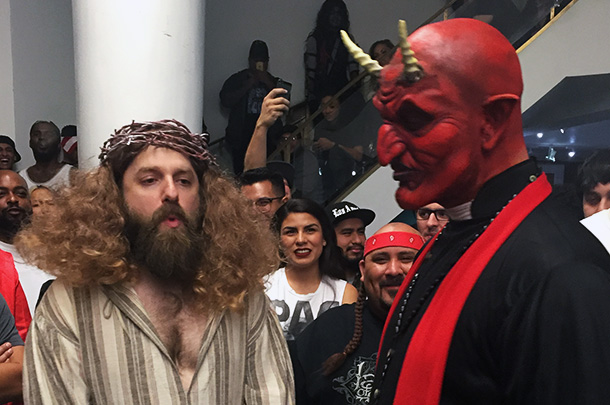