By The Sea Movie Review

Next time you become envious of your married friends who are traveling on vacation, remember that there’s no need to be.  Aside from the hassles of travel—crowds at customs, absence of leg room on the flights, language and culture barriers–you should realize that any problems a married couple have will be increased when they are together 24/7 on their trip.  You don’t believe me?  Look at the handsome couple on the screen, Brad Pitt and his real-life wife Angelina Jolie Pitt.  Brad performs in the role of Roland, a writer, a failed writer in his own estimation, while Angelina plays Vanessa, a failed dancer so to speak, one who was happy while on the stage but is now too old to be called on for her terpsichorean skills.  They go to a village in France, perhaps on the Riviera (actually filmed on the Maltese island of Gozo).  And despite zipping about in their cool convertible which travels along the touristic, winding roads, they are not happy.  They are both angry about something—we learn near the conclusion about what and wonder why that should cause such animosity between them—but Vanessa is clearly the more enraged of the duo.  No sooner do they arrive at their quaint hotel, a short walk from the bar and restaurant tended by Michel (Niels Arestrup) under the supervision of owner Patrice (Richard Bohringer), than they begin to act out.  Roland dines alone though he has a sympathetic ear in Michel, who misses his wife who had died a year earlier.  (The film takes place during the 1970s when people still had to talk to each other rather than to their iphones.)  Vanessa spends most of the day on the terrace, her oversize hat shielding her from the sun.  There is virtually nothing to do in this village, which puts a premium on the quality of the tourists’ relationship with each other.

When Roland attempts intimacy, he is pushed aside as his angry wife considers him a drunk and worse than a failed writer.  From time to time Roland lets loose an outburst, “Stop it!  Stop it!” as he can barely understand his wife’s frigidity, but they get their thrills from watching their young neighbors in the other room, Lea (Mélanie Laurent) and François (Melvil Poupaud), who are on their honeymoon and who have no problem “working on producing a child” day and night.

“By the Sea” is a Brangelina vanity project which director Jolie Pitt may be reaching out visually to pull an Antonioni and literarily to emulate Edward Albee, but the entire picture, save for a few melodramatic flourishes, is virtually inert.  Anyone in the audience thinking of traveling in the near future to a cozy little village somewhere in Europe may be inspired to change plans and go to Cancún or Vegas or Punta Cana, where the non-stop action can divert their minds from their traveling companions for a while.  Those who are not thinking of traveling may consider going to a screening of “Bridge of Spies” or even any in the “Terminator” series as an antidote to “By the Sea.”  The audience for “By the Sea” will be either middle-aged and older people who think they will be watching a dialogue-rich art piece or younger moviegoers whose reading habits revolve around magazines like “People” especially if Brangelina are the subjects.  Most will be disappointed. 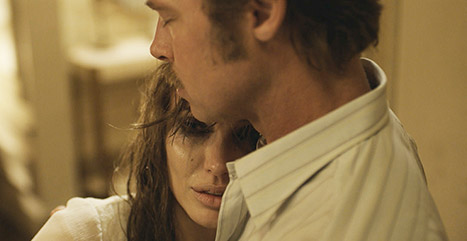