Maya (Dylan Penn – as in the daughter of Sean Penn and Robin Wright) is tired of living in luxury with her parents, so she decides to leave and move in with her boyfriend Dante (Ronen Rubenstein, Some Kind of Hate). She’s a little apprehensive when she finds he’s squatting in a condemned apartment building on Manhattan’s Lower East Side. His musician friend Loki (Honor Titus) and his girlfriend Alexa (Genevieve Hudson-Price) join them.  The place wouldn’t be that bad if it weren’t for the other residents of the building.  There’s the junkie Tess (Lydia Hearst, Cabin Fever: Patient Zero), drug cook Cookie (Perry Yung, The Knick), crackhead wannabe Jewish pimp Bigfoot (Jordan Gelber, Elementary) who beats on his  transvestite prostitute Roxy (Kevin Smith Kirkwood), BDSM aficionado Bodybuilder Murphy (Michael DeMello), and “superintendent” Shynola (Anthony Chisholm, Oz) who’s got a big batch of weird in his apartment. Because of the poor plumbing and lack of trash desposal, all of the residents are exposed to some virus that changes them into vampire-like zombies and blocking all ways of escape.  As the last untainted tenants, Maya and Dante must search for some way to get out.

The Good: The lovely Lydia Hearst has a lot of fun portraying a butt- ugly drug addict. The dom and sub gay duo were the most interesting of all the characters. The heroin inside the fortune cookie was the only part that made me laugh.

The Bad: Boring and hard to follow from start to finish.  There’s no real flow to the story. The cinematography got a little tiresome when the camera would go swimming down the drain with each resident of the building either puking or pissing or flushing shit. I guess it was an adequate cheap and easy transition though.  I can’t tell if the actors had a script or if many of them were just not very good at improv. There were loads of uncomfortable silences as if they didn’t know what to say. Several scenes were shot just for shock value as they didn’t have much to add to the pace of the film. A transvestite hooker crawls through a puddle of bile, a leather daddy pisses on his gimp and forces him to drink it out of a dog bowl.  The make up effects are cheesy and juvenile. The zombified actors look like they had a hard-boiled egg and Frosted Flakes fight before the cameras started rolling.  They should’ve consulted with Lloyd Kaufman because Troma does a better job. Dylan Penn’s character is a spoiled rich girl who doesn’t want to put up with her parents, so she picks this life over that? Apologize to your parents and go home. I’ve been in a situation where I was almost homeless, and I would never consider putting up with this crap.

I don’t get why Dylan Penn is top billing except for the fact that she’s Hollywood royalty. She barely had any lines and when she did, she was an annoying shrill brat.  All of these throw-away characters are living in a condemned building. Are we supposed to care for any of them, answer no. The ending was predictable and the dialogue was just stupid. This felt like a complete waste of time. 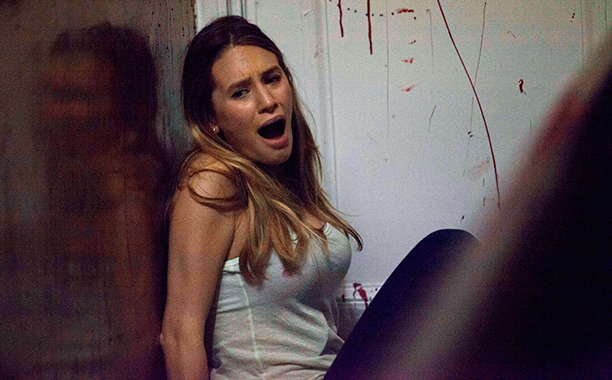