If you’re just starting out in your married life and you think of having kids (as most couples do), you may be concerned about the cost of bringing one up from prenatal expenses to those of a living creation to age 21 and, nowadays, beyond.  But money isn’t everything.  Remember the old saw about how a young person killed his parents and threw himself on the mercy of the court because he was an orphan?  Yes, you ought to think of what the young ‘un might do to you if he doesn’t get everything his way.  To reinforce that point, there’s a movie that could make you change your mind about spreading your seed, and it’s a horror film, “Goodnight Mommy,” with the less effective title in the original Austrian German, “Ich she, Ich she—which means “I see, I see.”

The English language title probably gives away what’s going to happen, but it’s the getting there that’s the thing, because the journey is more important than the arrival.  Though no monsters come out of a person’s stomach and no massive slashing takes place, the story builds up slowly before it reaches the gore that could make many an audience member look away.  And it’s Austria’s entry into the foreign language best picture competition for the 88th annual Academy Awards show.  This could mean either that Austria does not have a vast array of impressive films to choose from or that the German-speaking nation really believes in the tension that Veronika Franz and Severin Fiala create.

The three-hander opens as twin brothers Elias (Elias Schwarz) and Lukas (Lukas Schwarz) are stunned upon seeing their mother (Susanne Wuest) come home with her face wrapped in bandages after cosmetic surgery.  Because their mom starts acting weird, for example punishing the lads for minor offenses and demanding absolute silence in the house to allow her to get doctor-advised rest, they being to suspect that the woman is an imposter, not their real mom.  After the kids spot a picture that features their mother together with an unknown woman wearing the same clothes and looking pretty much alike, their suspicions are raised to such an extent that they escalate their own weirdness.  You’ll note that Lukas appears to be mute, whispering nothings into his brother Elias’s ear, which makes one unsurprised that the mother (or whoever) ignores the silent one and demands that Elias not speak any more to his sib.

Ultimately, the brothers, who collect giant beetles, hide a stray cat under the bed, and spend all their time with each other outside their home in the remote Austrian countryside, are determined to expose the bandaged woman. They tie her to the bed, seal her mouth with crazy-glue, and interrogate her with methods that the Gestapo would only envy.  One brother captures the sun’s rays in a magnifying glass to torture the woman into a confession, leaving a scar on her face, though we wonder why the kids could not simply quiz the lass about events in their lives.  The torture scene escalates.

This is a marginally effective movie without the intricate plot lines of a much better one, “Funny Games,” by fellow Austrian Michael Haneke, though watching these brats at work becomes tedious as they are not particular clever or witty or adept at issuing bon mots.  The dialogue is in German with mediocre, white subtitles, not always easy to read. 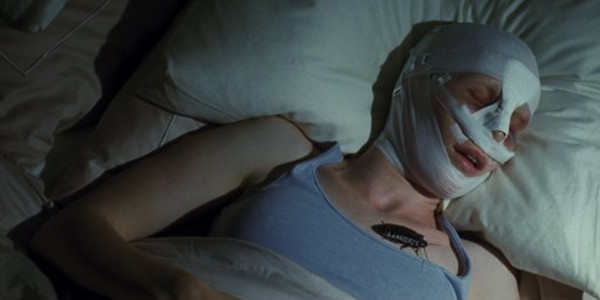