The public loves movies that expose corporate misbehavior, efforts to cover up flaws that should be obvious to fairly educated and open-minded individuals.  A superb example of an exposé occurs in one of the best satirical films to grace the screen, “Thank You For Smoking,” done in a comical and thoroughly ironic style as lobbyists for the three horsemen of death—tobacco, guns, and drugs—meet annually for dinner, each trying to prove that his corporation kills the most people.  “Concussion” is similar but with a big difference.  You could imagine that Will Smith’s large and devoted audience will go to see the movie, but since football, America’s favorite sport, has its feet put to the fire, many will leave the theater depressed, maybe angry.  Perhaps you are the president of a college that gets much of its money from rich alumni who will contribute mightily if the school has a winning team. Maybe you’re a kid who wants to convince a skeptical mother that you should try out for your high-school team.  Or perhaps you’ll blame the favorite scapegoat of Republicans, the lefties, for putting across a movie that will do…what next?…tell schools to abandon football and instead set up badminton courts?

One thing, though, that will not disappoint is Will Smith’s performance as Dr. Bennet Omalu, a Nigerian immigrant who has more degrees than a thermometer, and works as a pathologist in Pittsburgh, performing autopsies on people, and talking to the corpses as though they were alive.  “Help me on this one,” is not an unusual request from the doctor to the “patient,” and miracle to behold, the stiffs do indeed cooperate enough to give the good doctor a diagnosis that should have been obvious but is not, simply because their brains do not show this illness on CT scans.  The pro football players who eventually get cut up by Dr. Omalu are given the diagnosis of CTE, or chronic traumatic encephalopathy, brought about, in the doc’s opinion, from being conked on the head thousands, probably tens of thousands of times during a career.  Naturally the doctor is demonized by executives from the National Football League whose protests remind us of the ways the big seven tobacco companies swore before Congress that cigarettes cannot possibly cause cancer.  Yet, surprisingly in this movie, he gets only two crank calls, folks who call Omalu a quack.  Nor does anyone try to heave a rock through his window, but since this is based on a true story, well, it’s probably true that he got away after using science and common sense to get an article published in a major medical journal.

Will Smith maintains a Nigerian accent for most of the two hours, slipping just occasionally, but to his credit, this terrific actor is able to communicate like the immigrant he is without calling attention to his speech. Not so successful is a sob story dealing with the way he meets the woman who will become his wife, Prema Mutiso (Gugu Mbatha-Raw), who surprisingly is handed over to Omalu by his religious leader to be housed in his spacious digs.  They fall in love, they marry, she has a miscarriage.  In a documentary, the doctor’s love life would probably not be bothered with, but when you’re trying to attract a middlebrow audience, how do you get box office without a romance?

Alec Baldwin, Stephen Moyer, David Morse, and Eddie Marsan get some conventional enough roles as Dr. Julian Bailes (a supporter of Omalu), Dr. Ron Hamilton, Mike Webster (who at age fifty had become homeless despite his career as a pro football star and a citywide hero), and Dr. Steven DeKosky forming a cool ensemble in a feel-good movie that may or may not be the ideal one to open on Christmas Day (do you want to see bodies cut up at that time of year)?  The film is nicely shot by Salvatore Totino and with an appropriate score by James Newton Howard. 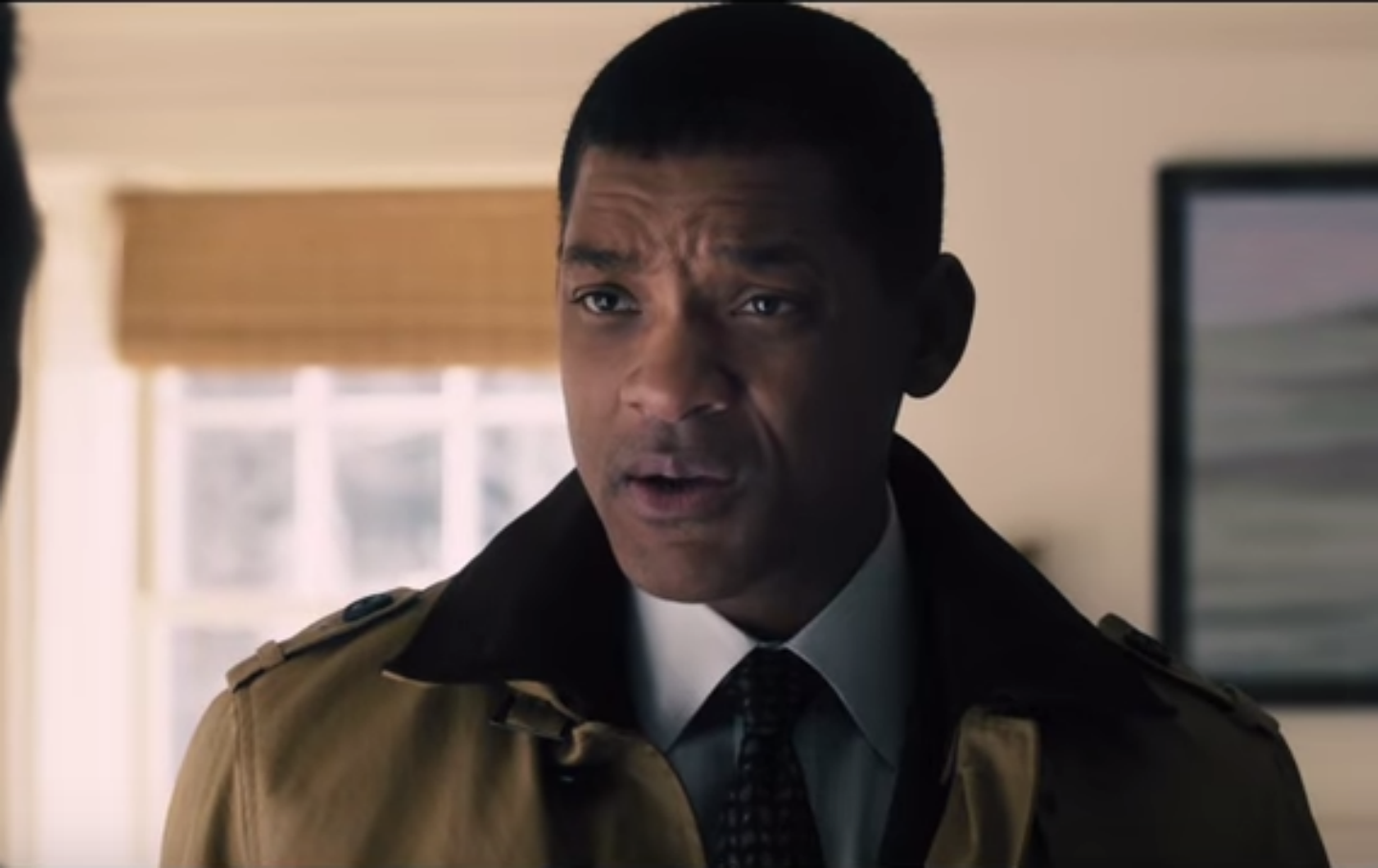