Lee Strasberg – De Niro’s teacher and mentor – might be turning in his grave by cause of the poor career choices his pupil has taken in the past decades. However De Niro seems to be having the time of his life, ever since he embraced buffoonery.

In Dan Mazer’s ‘Dirty Grandpa’ Bob De Niro teams up with Zac Efron on the most rip-roaring and kooky grandfather-grandson adventure you can imagine. Jason Kelly (Zac Efron) is an uptight young lawyer who is one week away from marrying his boss’s controlling daughter. But grandfather Dick (Robert De Niro), comes to his rescue. Jason finds himself driving the foulmouthed old man to Daytona Beach, for a wild spring break that includes frat parties, bar fights and an epic night of karaoke. While Jason worries about the upcoming wedding, Dick tries to show his grandson how to live life to the fullest.

The film is a non-stop, plethoric, running gag. The vocabulary of the film revolves around genitalia and the wisecrack humour is rather filthy. The comedy is completely centred around profane sauciness. You feel obliged to laugh not to fail expectations, nor be considered puritanical. But the truth is that the jokes simply aren’t funny enough. The actors are. The freewheeling DeNiro-Efron duo is luring, in the way they give into sensationalism with great self-mockery. Other than that, and a few truly amusing moments (as the one where De Niro starts rapping at a karaoke club), good taste does not characterise the wit of this flick.

British filmmaker known for producing ‘Bruno’, ‘The Dictator’ and ‘Borat’, goes astray as director. Sexist cliches and vulgarity rule and they become tiresome on the long run. With its spring-break theme the target audience for ‘Dirty Grandpa’ is presumably the college crowd, which underestimates the millennials’ cerebral skills.  It assumes they are all fools, obsessed with sex and drugs. When it comes to sex comedies, there is a fine line between hilariously awkward and inelegantly perverted. Dan Mazer crosses the line to distastefully cringe-making and the only thing he bequeathes to moviegoers is Fremdschämen. 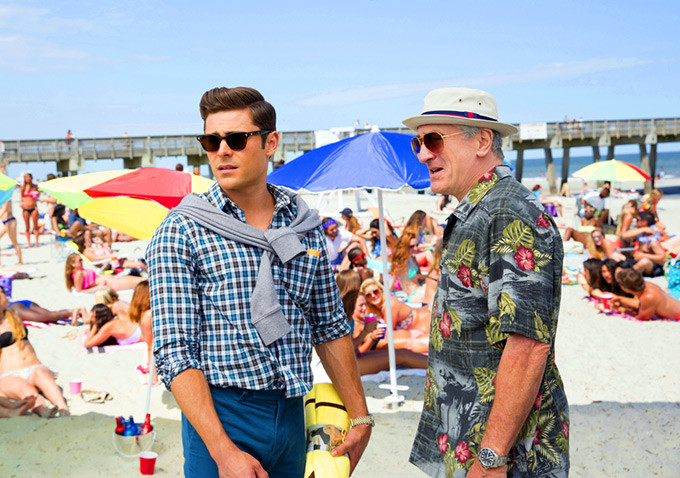