Eating is a social occasion to such an extent that we may feel sorry for those, like business executives, who must often dine alone.  People bond over food.  State dinners are de rigeuer in much of the world, sharing of food helping along agreements between countries.  And people bond as well over cooking.  Though cooking at home is often a solitary event until your mate gets home (“Hi Honey, what’s for dinner?”) in restaurants the cook and his assistants hopefully have close relationships at least when the chef de cuisine is not yelling.  Naomi Kawase points out in “Sweet Bean,” known in its original Japanese simply as “An,” that even in a tiny establishment, relationships between the cook and his assistant, the cook and his customer, can be a profoundly spiritual event.  In fact the characters herein, based on Durian Sukegawa’s novel—Tokue (Kirin Kiki), Sentaro (Masatoshi Nagase) and Wakana (Kyara Uchida)—are lonely individuals who come together over a seemingly un-exotic food known as dorayaki, giving delightful uplift to each solitary life.  Each comes across as a drudge, their days passing one upon the other, but when the trio get together, it’s like the marriage among pizza dough, tomato sauce, and mozzarella cheese.  Or in this movie, like pancake dough, humble beans, and Mother Nature herself.

Writer-director Naomi Kawase’s previous works include “Still the Water,” about a young couple who discover a dead body in the water and through it learn something about the cycles of life, death and love.  “Sweet Bean” flows in a similar zen pattern, the lowly bean leading to a breakthrough, as the manager of a tiny pancake establishment experiences a similar epiphany.

Sentaro (Masatoshi Nagase) manages a tiny restaurant—really a simply stand with four seats for customers.  To the naked eye, he’s just another grunt trying to make a living in the only way he knows how.  His sweet bean pancakes are acceptable, but from the time he opens each day at eleven, he has never seen a line of customers.  His regular patrons include a trio of giggly high-school girls who tease him good naturedly, and a fourth girl, Wakana (Kyara Uchida), who is shy and for reasons not really explained does not intend to go to high school.  Enter Tokue (Kirin Kiki) an eccentric 76-year-old woman, who applies for and grudgingly receives the part-time job of assistant cook, and whose preparation of sweet beans from scratch rather than from a pre-processed supplier brings in the crowds.  She shows “boss” step by step the long process of preparing the beans daily, and talks to the food, which at first looks like one of her eccentricities but which we are led to believe is her invocation of nature to assist her in making the delicious snack.  The rumor spreads that she has Hansen’s Disease, which is true, and which will ultimately put an end to her brief happiness, but not before she receives a wonderful visit at the sanitarium from the 15-year-old girl and Sentaro.

This drama with significant comic elements proceeds along at an awfully slow pace, one which is patient at disclosing the flaws in the principals: Sentaro has a problem with alcohol and had been incarcerated; Wakana has problems with her single mother; Tokue, who may represent Nature herself, has been isolated from society and is dying.  Yet “An” could be called a feel-good drama because of its spiritual uplift, one which does not hesitate to focus attention on the local cherry blossoms, evoking a poetic mood which will find a cultured audience willing patiently to give each frame its needed attention.  The film, in Japanese with English subtitles, highlights the splendid performance of Kirin Kiki  Call her the Japanese Maggie Smith. 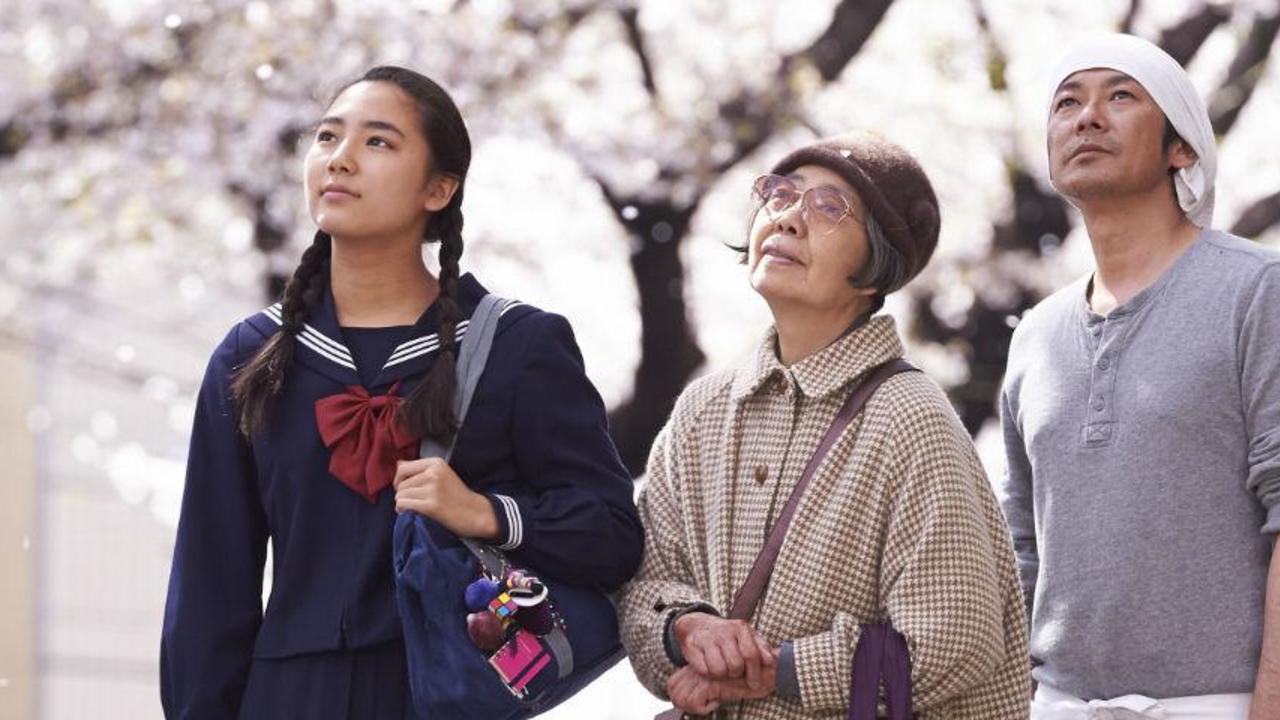