Title: The Sea of Trees

If you google “the perfect place to die” your result will be the Aokigahara Forest, The Suicide Woods of Mount Fuji. This phrase, which is the title of Wataru Tsurumui’s bestselling book, has inspired director Gus Van Sant for a new film that explores a man’s introspection on the way he has lead his life as a husband.

An American scientist, Arthur Brennan (Matthew McConaughey), travels to the “Suicide Forest” in Japan, the site of numerous suicides, to end his life. There he encounters a Japanese man, Takumi Nakamura (Ken Watanabe), who wants to kill himself as well, and both men begin a journey of self-reflection and survival, where Arthur contemplates the flaws in the relationship with his wife Joan (Naomi Watts).

This voyage through Purgatory is rather rhetorical, since the man of science   — who disbelieves in the supernatural — is pushed to acknowledge the greater forces around us. In perfect J.J. Abrahams’ style we will come to discover (without any surprise) that the encounter in the woods was an illusion for enlightenment. Watanabe-Virgil leads McConaughey-Dante in the depths of the lieu of cleansing and purging, where the American visitor can undergo penance for his wrongdoings towards his Beatrice-Watts.

This is not the first time that Gus Van Sant explores the theme of death, in ‘Elephant’ it was contingent, in ‘Paranoid Park’ it was accidental, in ‘Last Days’ it was suicidal, in ‘Restless’ it was a mise en scène about love. ‘The Sea of Trees’ continues along these lines but without having that poetic romance. The banal love-crisis story gets sucked up into pretentious existential ponderings. All the elements that should surprise are predictable and the audience sees them coming beforehand. Just like the protagonists of ‘The Sea of Trees’ Gus Van Sant loses his bearings on whether to channel his latest movie towards independent filmmaking or Hollywood mainstream. 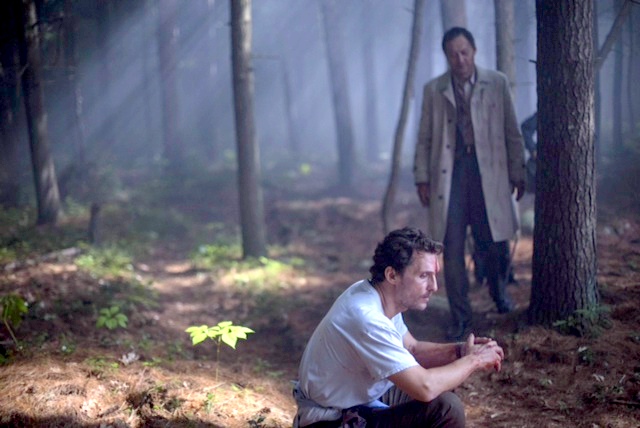