Screenwriters Jon Lucas and Scott Moore, known for their collaborative work on movies such as ‘The Hangover’ and ‘21 & Over,’ team up once more to direct a movie about the imperfection of motherhood.

Amy Mitchell (Mila Kunis) despite her efforts to be the exemplary mother, becomes the effigy of the “Bad Mom”. She is over-worked, over-committed and exhausted to the point she gets fed-up and joins forces with two other over-stressed moms – Kiki (Kristen Bell) and Carla (Kathryn Hehn) – on a quest to liberate themselves from conventional responsibilities. Amy will break free from a cheating husband, get close to a new beau and challenge the PTA Queen, Bee Gwendolyn (Christina Applegate), and her clique of devoted perfect moms.

Despite the trigger of the comedy is very timely and empathetic, the mise en scène is appalling. Being a mother is a full-time job that cannot be taught, but is learnt day by day. It becomes extremely challenging for 21st century moms to combine their hectic office deadlines with those of their children, in an extremely fast-paced world. However, the opportunity of weaving irony around this social phenomena, is wasted: the script is drenched with lousy dialogue, that is overacted and captured on camera with rebarbative slow motions.

The outcome is not comedic, but irritating. The extraordinary talent on screen (Mila Kunis, Kristen Bell, Kathryn Hahn, Christina Applegate, Emjay Anthony, Jada Pinkett Smith, Jay Hernandez), is directed infavourably. The genitalia humour and dwindling cliches of female parenthood, utterly misuse a skillful cast of comediennes, for what could have otherwise been a witty cinematic social commentary.

The only effective part of the flick is when the credits roll and you see the actresses chatting with their real mothers about their childhood, and the way the circle of life has pushed them to be mothers too. This moment, when we witness different generations of “bad moms” comparing their mistakes and trivial defiances, is way more sympathetic and amusing than the actual fictional film. 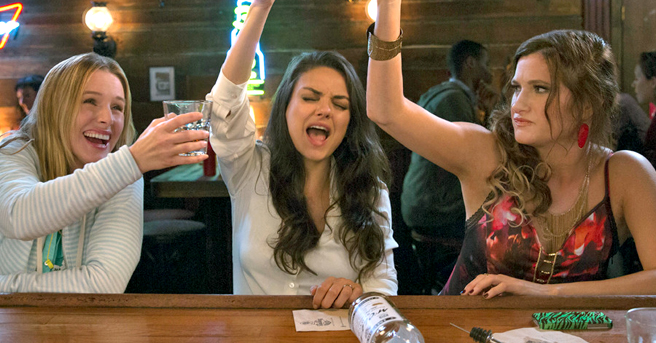