When President Obama’s Affordable Care Act was passed without a single Republican vote, the GOP attacked it fiercely, but the most off-the-wall criticism was by Sarah Palin, running for Vice President on a ticket with John McCain.  Palin insisted that the POTUS would set up death panels, committees of doctors who could decide to pull the plug on granny rather than give her all the medical assistance she was due.  The aim of the Democratic administration, they said, was to save money on government-financed health care, predicted to be budget busting sometime in the near future.  If Ms. Palin were to see “The Purge: Election Year,” which takes place in Washington DC in the year 2025, she would say (not an exact quote), “I told you so!  Look what’s happening!  The federal government has declared a Purge Night each year wherein for a 12-hour period, crimes would not be punished, with murder the most recommended infraction.”

Allegedly, thirty percent of people believed Sarah back in our own time, and who knows what percentage might have their beliefs strengthened by the trio of “Purge” movies, in which the President by executive order allowed blood purges annually from 7 p.m. to 7 a.m., and bring on the heavy artillery.

This time, though, in 2025, there is opposition to the U.S. President, who is a man who wants to cut the budget not only on health care but on payments to the poor, who are considered to be easier targets than the well-off.  Opposing the government is Senator Charlene ‘Charlie” Roan (Elizabeth Mitchell), running for President on a ticket that would end the purge, opposed by a wacko “minister” with a bloodthirsty congregation that would like nothing better to make Charlie’s assassination a top priority.  As dusk descends on DC, Sergeant Leo Barnes (Frank Grillo) takes the job of protecting the senator, armed with only a pistol, though the massive firepower of the thugs who roam the streets dressed in masks that channel the Carnival in Rio with the yearly Halloween parade in Greenwich Village.  Never mind that there must be a place for high government officials in or near the capitol building.  The senator winds up in a local bodega run by “Joe,” a fellow who says that “this store is all I’ve got,” and who conducts lively conversations with a band of friendly people.  Some of these down-home folks will use some equally fierce firepower against the purge people (and especially against a woman of about twenty who was caught stealing candy in the store and who could make a sailor blush in her opinions about poor Joe).

That’s about the plot of this movie, filmed in D.C and in Providence and Woonsocket Rhode Island but which could just as soon have been filmed off a video game.  Bullets are flying, crashing into buildings and forming hundreds of perforations in the concrete, realistically captured on camera that not only allows us to see the holes as they are formed, but also features heads exploding as the weaponry sinks into foreheads of people who are either masked or innocently walking around outdoors.  All of which makes one wonder why the senator is protected only by a vest rather than full, medieval body armor.

There’s not too much time for dialogue, which is a blessing given the folksy banality of the talk.  This is a film for fans of vid-games, many of whom in the screening I attended applauded as the bad guys are taken out.  And if Sarah Palin is reading this review, as I’m sure she will, one hopes she is reminded that Purge Night 2025 is fiction.  Or is it? 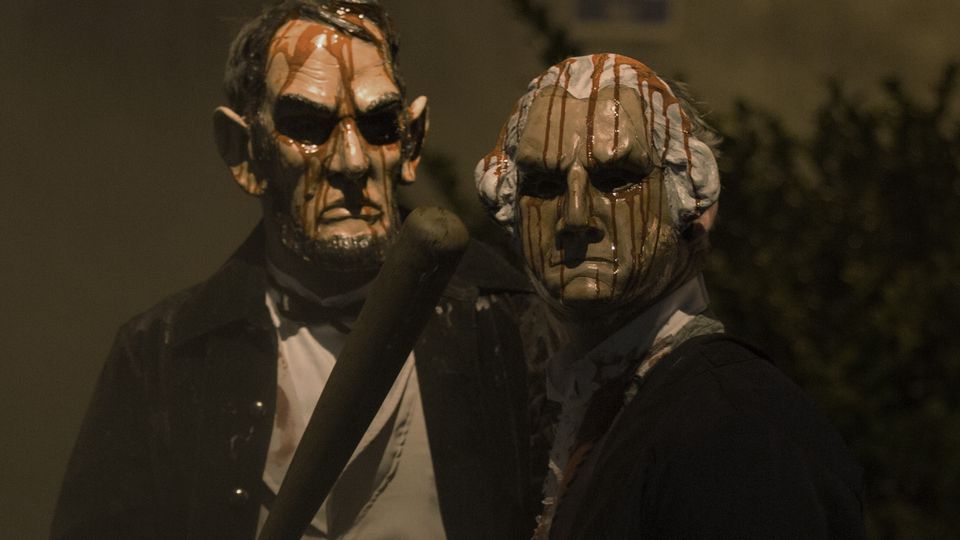