The topic of PTSD has gradually weaved into the cinematic medium in recent years. The difficult return to normal life, after having seen death and the horrors of combat, is what sets in motion Alice Wincour’s ‘Disorder.’

Vincent (Matthias Schoenaerts), a French Special Forces soldier just back from Afghanistan, is suffering from a post-traumatic stress disorder. He is hired to ensure the security of Jessie (Diane Kruger), the trophy-wife of a rich Lebanese businessman, and her son Ali (Zaïd Errougui-Demonsant), at their luxurious villa. As he starts experiencing a strange fascination for the woman he has to protect, Vincent increasingly seems to fall into paranoia, until the actual thriller begins.

The French cineaste, just like in her first feature ‘Augustine,’ explores the protagonist’s physical malfunction. The movie is built around Vincent’s phenomenology, his physical perception of what goes on around him and the consequent altered vision of reality. The audience experiences the entire drama through Vincent’s senses, as he becomes attached to Jessie and Ali.

Matthias Schoenaerts, once more, proves his eclecticism by representing with great dignity and reservedness the wounded soul of an ex-soldier. The chemistry between him and Diane Kruger works wonders: their complicity coyly builds up, as we listen to them converse in French.

The psychological thriller is based on ambiguities, related to Vincent’s paranoia, and all of this collapses with the manifestation of an actual threat. However, one of the elements that keeps audiences spellbound is the charisma of the house. Despite ‘Disorder’ can not be classified as a horror movie, the mansion where Jessie lives becomes a character of its own, just as in many films pertaining to that genre.

In fact, the original title of the film “Maryland” is the name of the abode, that is stage to the home-invasion. Disorder’s house mirror’s the polysemy of Vincent’s state of mind. It has a fascinating duality. An eerie-magnetic charm. It serves as a prison and a shelter, the place of incommunicability and the setting where revelations occur, a luxurious haven for lavish parties and the disrupted final destination for war zone. 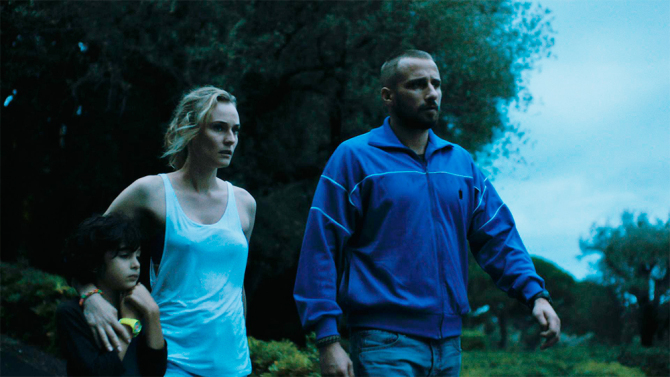