The most common method of suicide the United States involves the use of a firearm, a bullet aimed at point-blank range to the head, chin or chest. One such successful attempt was made by Christine Chubbuck, a twenty-nine year old television news reporter in Sarasota, Florida, on the morning of July 15, 1974. What made her suicide different was that she took her life during a live television broadcast. Christine requested that the program be taped and wrote post-mortem instructions describing her final condition as “critical”. She was taken to Sarasota Memorial Hospital and died there fourteen hours later.

Ask any person in Sarasota “who was Christine Chubbuck” and you may get blank stare. Her exhibitionist act had been forgotten until the twenty-first century. A song was written in 2014 to honor the life of Chubbuck, titled “Christine (I wish I could have)”; A film “Christine”, directed by Antonio Campos will be released on October 14th this year; and a documentary “Kate Plays Christine” will open theatrically on August 24th.

Director Robert Greene melodramatically introduces us to Kate Lyn Sheil, a thirty-one year old film actress, who researched the life of Christine Chubbuck, before recreating the character on film. Kate goes through a gradual physical transformation that includes: body tanning, changing eye color, getting fitted with a wig, and talking with a psychiatrist and Christine’s supervisors. She also views early tapes of Christine’s interviews, watching for her speech patterns and facial expressions. Kate then proceeds to recreate fictional scenes between Christine, her mother, brother and co-workers. Director Greene goes for “the kill” by filming Christine’s suicide several times, while searching for a good “take”, thus diminishing its importance and making it look banal.

In the end audiences can’t avoid but agree with the interviewees that Christine Chubbuck was an unremarkable individual who performed a gruesome act under the most unusual circumstances and did not live to talk about it. 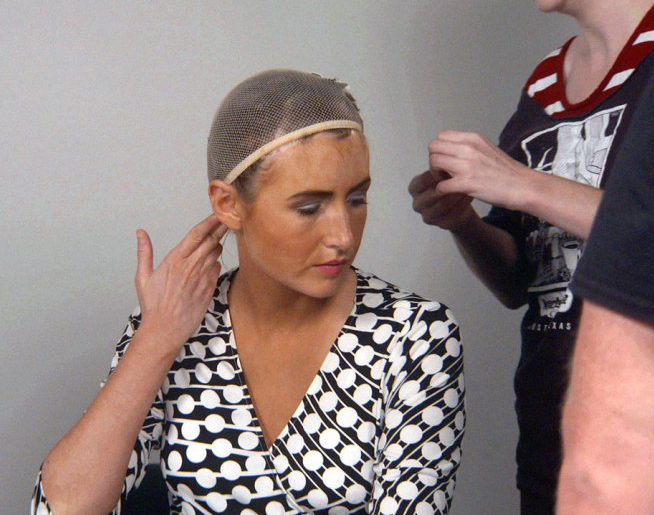