‘La La Land’ will make you leave the screening room merrily tap dancing and singing your way out. Damien Chazelle (whom we recall for directing ‘Whiplash’ that won Best Film Editing, Best Sound and Best Supporting Actor for J.K. Simmons, at the 87th Academy Award), returns with an exquisite love letter to the history of musical.

This American romantic musical comedy-drama is set in the contemporary City of Angels. Aspiring actress Mia (Emma Stone), serves coffee to movie stars in between auditions, while dedicated jazz musician Sebastian (Ryan Gosling), plays in dingy bars to survive. The two meet and fall in love. As success mounts, the dreams they worked so hard to maintain threaten to rip them apart.

The narrative brings our mind back to Gene Kelly’s movies ? such as ‘Singing In The Rain’ and ‘An American In Paris’ ? where the fledgeling artist meets the ingenue. The costumes, the scenery and the magic of Chazelle’s direction, evoke the era of the fifties, when Cinemascope made it’s grand entrance on the silver screen. Everything is tinged with entrancing performances, lights, colours, and music.

Musical fans, will recognise many musical homages such as ‘Fame,’ ‘Funny Face,’ ‘Everyone Says I Love You,’ as the plot perfectly revamps ‘The Last Five Years’ ? where the relationship between a rising novelist and a struggling actress was told in reverse chronological order. This is exactly the heart of ‘La La Land,’ that moves back and forth through time at the pace of an interior monologue, making realism meet with oneirsm.

The beauty of the film is the way life draws two dreamers close to their personal happy ending, but far from the conventional fairytale love finale. In this manner the director poignantly brings together romantic French and American musicals of filmmaking’s Golden Age into our more complicated and jaded age.

Audiences get to see the other side of red carpets and glamorous parties, they are revealed the untold humiliations celebrities have gone through before rising to stardom. They get to experience life in all it’s enticing complications, missed timings and “what ifs.”

Justin Hurwitz, composer of the score, intensifies the musing mood: his wistful soundtrack enhances the magic of the choreographies, where Ryan Gosling and Emma Stone dance and prance, fluctuating in the air as a contemporary Ginger Rogers and Fred Astaire duo. And no matter whether the music is instrumental, sung or a cappella it is craftily weaved by Chazelle, to portray the stream of consciousness we have while listening to tunes that are dear to our hearts.

‘La La Land’ reminds us that the movies we make in our minds, distorting reality into our improved version, only need a simple melody. Viewers are thusly taken on a trip through the ecstasies of the happiness we chase, and the heartache of the passions we never get over. 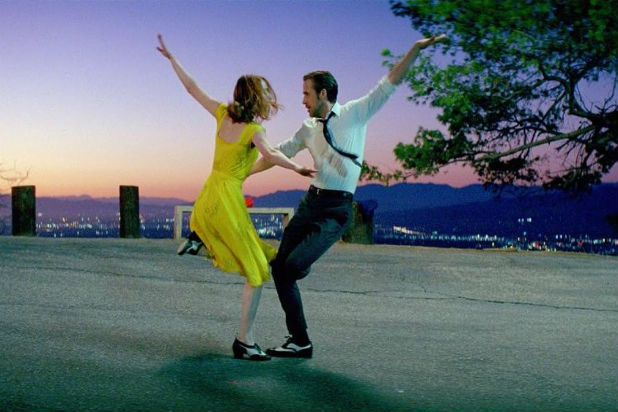