The Ancient Greeks considered exile from their beloved city-state to be a punishment worse than death.  In the outside world, an Athenian would be a nobody, perhaps scorned by the local population.  You can’t blame Socrates for drinking the hemlock rather than accepting his friends’ offer of escape to another land, but you’ve got to wonder why Tilly Dunnage (Kate Winslet) in Jocelyn Moorehouse’s “The Dressmaker,” would be so interested in revenge.  She was cast out of the Australian hamlet of Dungatar (you don’t have to be Donald Trump to call it a hellhole) winding up in Melbourne, London and Paris.  Is that a problem?  During the years she spent in Paris, she learned the art of making high couture dresses, but she could not forgive the louts in the dusty town that per capita had more scoundrels than you’d find in New York, Los Angeles or Chicago.  Even her own father, whose identity is revealed toward the conclusion, is guilty of pronouncing the exile since she was falsely accused of killing a local bully, Stewart Pettyman (Rory Potter) at the age of ten.

Her first words (are you listening Bartlett?) upon returning from Europe: “I’m back, you bastards.”  Tilly, formerly known as Myrtle Dunnage, finds time rapidly to connect with the likes of a cross-dressing police sergeant (Hugo Weaving), who is not entirely unhappy at seeing her return, and Teddy McSwiney (Liam Hemsworth), one of the young lads in a daredevil gang of soccer-playing boys has grown up into a handsome man who takes an immediate interest in Tilly, seeing her in a smashing outfit—which she changes daily, it seems, as though she’d been watching Hillary Clinton.

She goes to work gaining fans for her dressmaking, rendering an incredible transformation of Gertrude Pratt (Sarah Snook), a store worker who is not only covered with outfits that would fit in at a British coronation but attracts an ardent suitor for her hand in marriage.

Director Moorhouse, also coming out of exile after a fourteen-year absence, is best known here for “Proof” (a blind photographer looked after by a housekeeper has his life turned around by a restaurant worker).  Co-written by Moorhouse’s husband, P.J. Hogan, “The Dressmaker” utilizes Kate Winslet as a catalyst that turns a backwater town upside down but makes ample room for the terrific talent of Judy Davis in the role of Tilly’s mother, Molly known as Mad Molly, who is convinced that her daughter is guilty and has no hesitations about growling and grousing until, realizing that her little girl may be innocent, takes out her hostilities against the townspeople.   But nobody can convince the dead kid’s dad, Evan Pettyman (Shane Bourne) who is an equal opportunity hater as his suffering wife (Alison Whytle) an testify.  As for testifying, there’s the schoolteacher (Kerry Fox) whose false accusation of witnessing the so-called murder of Stewart was the final straw in prompting the exile.

“The Dressmaker” is conceivably the year’s camp picture, the off-the-wall antics of the small-town politics serving for comedy, but room is made during the final minutes for a retribution that would make Carrie envious. This movie is targeted for lovers of high camp, and for those who are fond of Judy Davis, born in Perth, Australia (the city that is geographically the farthest distance from my New York).  Davis, in fact, becomes the center of this frolic.  You might wonder what Kate Winslet must have been feeling to see the movie’s center stolen from her.  Would it spoil anything to know that “The Dressmaker” was filmed not in the hellhole of Dungatar but rather in the Docklands studios in Melbourne? 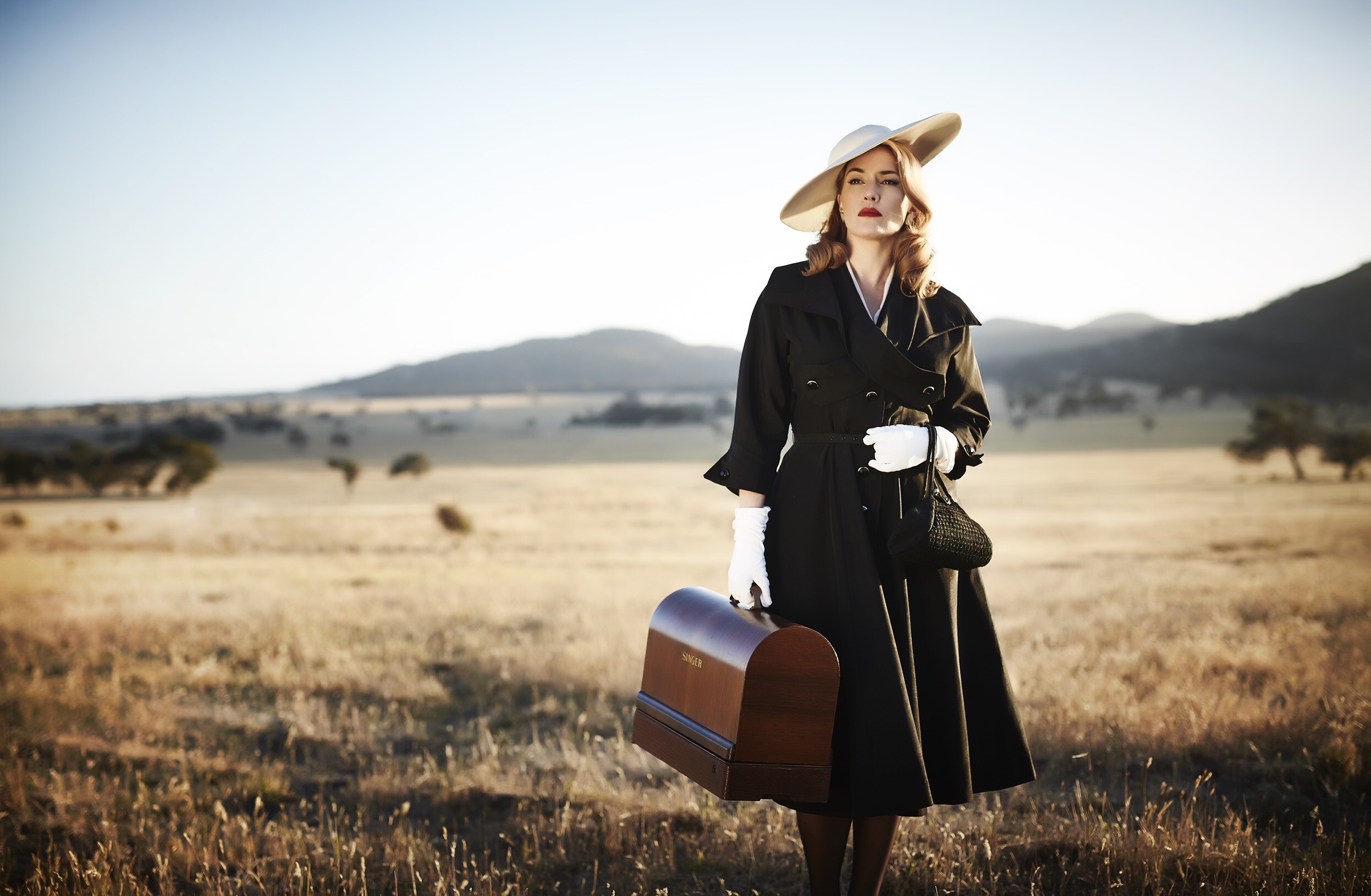