Remaining unrelentingly committed to, and ardent about, a project and their sense of ideals is one of the most important attributes for all creative people. That unwavering devotion is one of the main reasons why Emily Dickinson has become recognized as one of the most valuable and influential American poets of the 19th century. That persistence is also one of the major factors that helped emotionally drive the character and plot arcs of ‘A Quiet Passion,’ the latest period movie from acclaimed writer-director, Terence Davies.

The filmmaker was inspired to bring Dickinson’s life story to the screen, with the help of actress Cynthia Nixon in the role of the esteemed poet. The duo diligently worked together for over five years to bring their vision to life.

‘A Quiet Passion’ begins with a young Emily Dickinson (Emma Bell), whose repeated defiance of the stern headmistress’s evangelical piety at her school, Mount Holyoke, allows the teen to be sent home. Emily’s family, including her father, Edward (Keith Carradine), her brother, Austin (Duncan Duff), and sister, Vinnie (Jennifer Ehle), bring her back home to Amherst, Massachusetts. As the protagonist grows older (during which time Nixon takes over the role), her intellectual independence and sense of pathos that fueled her work also matured.

While her family is privy to, and accepting of, her barbed wit, especially when it comes to her passionate love for her beliefs and poetry, Emily’s ideals alienate her from overall society at times. While her church-going family still reminds her about the need to avoid vices, they’re still liberal enough to freely exchange ideas, and allow Emily to write poetry everyday between 3 and 6 a.m.

But the Protestant religion that the Dickinsons and their peers engage in did subtly end up shaping Emily’s thinking and poetry. Despite her free spirit, she still participates in church activities, during which time she becomes attached to Rev. Wadsworth (Eric Loren). While her family grows wary of her growing sentiments for the married church leader, Emily is hesitant to break their connection, as he’s the only person who unconditionally admires her poems. Even though Vinnie initially reminds her sister that it’s sinful to love a married man, the reverend’s inability to reciprocate Emily’s feelings eventually lead her to become reclusive during her later years. Her secluded nature allowed her poetic genius to became recognized and appreciated after her death.

Nixon and Davies generously participated in a press conference at Lincoln Center’s Walter Reade Theater recently during the 54th New York Film Festival (NYFF) to discuss bringing the celebrated poet’s life to the screen. The press conference was held on the afternoon of the biopic’s official NYFF evening premiere at Lincoln Center’s Alice Tully Hall.

Davies began the press conference by explaining why he decided to make his first feature that’s based on the life of a real person. “About six years ago, I began reading Dickinson’s poems, and I began to realize how wonderful they are,” the filmmaker shared. “I decided that I had to find out more about her, and ended up reading six biographies about her. Her story really intrigued me. She’s this woman who withdrew from the world and wrote this wonderful poetry. She proved that you don’t have to go all over the world to have an extraordinary life; you can stay in one place.”

The director added that “What really drew me to Dickinson’s story was her spiritual quest. She went back and forth between questioning if there is a God, and if people have a soul. She also wondered what people should do if they don’t have a soul, and if there isn’t a God. I was a devout Catholic until I was 22, so I responded to that” aspect of the poet’s life.

Dickinson “deserved to be more well known in her lifetime. I think she’s the most important American poet of the 19th century,” Davies passionately stated. “That’s why I wanted to” showcase the writer’s life in this type of biographical drama.

Like his other recent movies that aren’t based on his own childhood, ‘A Quiet Passion’ is the filmmaker’s latest film that features a strong and skeptical female protagonist. “I’m drawn to these types of stories, and they just happen to be about women,” Davies revealed. “When I was growing up, all of the big hits were about women, such as ‘Love Is a Many-Splendored Thing.’ I also grew up being close to my sisters and our mother.” The helmer added that Dickinson was a strong woman who resembled the females who he grew up admiring.

“In a way, Dickinson was also an outsider, and I’m also an outsider. I’ve never been a participant; I’ve always been an observer. I would never do anything adventurous or dangerous,” Davies admitted. “So I know what she was feeling.”

When the screenwriter began working on the drama’s script, he saw a photo of the poet when she was 17. He then began considering which actress he would be interested in casting as Dickinson, and soon considered Nixon. When Davies then decided to superimpose the poet’s features over the Emmy Award-winning actress’s face, he immediately recognized the similarities and resemblance between the two women. “I then began to see Cynthia’s face everywhere while I was finishing the script, and hoped she would say yes. She did say yes, and stuck with me for four years. She was very loyal to the project,” the filmmaker shared. “If she said no, I have no idea who I would have cast.”

Nixon then chimed in on her experience of becoming attached to play the main character in ‘A Quiet Passion.’ When she first met Davies, he auditioned her for another movie, which didn’t work out. “I then didn’t hear from him for awhile, but a few years later, he offered me this amazing project. He sent me this amazing script for an amazing biography about Emily Dickinson, and he asked me if I would play her. I was completely overwhelmed. But then I became less overwhelmed, because I thought that I would always have this nice compliment that I could keep, even if the film never happen,” the actress admitted, which garnered laughs.

“But they pulled it off, and it was amazing. I do feel like a natural choice to play Emily Dickinson, as I’m a huge fan of her work. My mother also admires her work, so I grew up with her poetry in our house,” Nixon also divulged. “I think as a young person, I really identified with the shyness that she felt.” Nixon added that she thought one reason Davies cast her as Dickinson was because like the poet, the actress can express her emotions non-verbally, particularly through her facial expressions.

Nixon also shared that she thinks “it takes a filmmaker like Terence to understand that just because you spend a lot of time indoors, and your acquaintanceship is limited, there can still be very dramatic experiences in your world. I think Terence was very focused on that, and did a really great job in showing it. He also shows how Emily and her family lived in a much more formal time than we do, but they still had feelings. Their emotions can be even stronger than ours, because there were less outlets for them during that time.” The actress added that the filmmaker is “a very dramatic person, so I think he made sure that we didn’t skimp on those exchanges.”

The performer also revealed that shooting the biopic in Belgium was very helpful for her portrayal of Dickinson. “We were very removed from our families. Jennifer Ehle and I have also known each other for many years, but not well. But we have funny connections, and became closer during the filming, so that was helpful. Overall, I think Terence chose wonderful actors who had the most enthusiasm for the project. We were all aware of this rare experience we were being given. We were all treated with sensitivity, and we all treated each other that way,” Nixon revealed.

“I also remember the child and teenager that I was, who related so strongly to Emily. I feel like I still have a lot of Emily inside of me, even though she’s more buried nowadays,” the actress also shared. “In this modern world, we either don’t have the luxury, or are able to avoid, feeling things so sensitively,” like Dickinson did. But at times, Nixon feels as though the emotions she has that are similar to what the poet was experiencing “are still close to the surface, even if they’re covered for function.”

In terms of Dickinson’s work not receiving the acclaim she deserved until after her death, and her words still being cherished in modern society, Davies noted that he loves her poetry. He’s also drawn to “the tragedy of her not being recognized while she was alive.” The filmmaker also noted that he feels her work is able to remain relevant today because she was human, and experienced a wide range of emotions, including humor and happiness. “At the end of the day, no matter how gifted someone is,” everyone is still human. But when an artist like Dickinson “is denied recognition, there’s something that warms me to them, and makes me want to fight” to preserve their legacy.

Watch the entire NYFF54 ‘A Quiet Passion’ press conference with Nixon and Davies below. (The video was added to the article on January 17, 2017.) 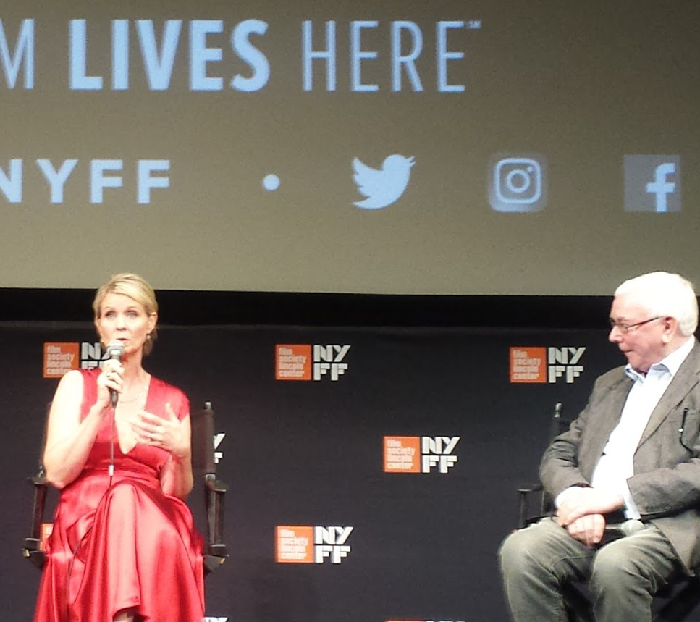