A Dickensian movie with the most gorgeous photography of any film this year, “The Handmaiden” is an adaptation of the Welsh writer Sarah Waters’ novel “Fingersmith” transported all the way to South Korea and Japan by Park Chan-wook.  The director has quite a reputation among those who like tales of revenge and violence.  His “Oldboy” focuses on a person kept imprisoned for fifteen years who must find his captor within five days, while his “Sympathy for Mr. Vengeance” finds a laid-off factory worker who kidnaps the boss’ daughter hoping that the ransom would pay for his sister’s kidney transplant.  “The Handmaiden,” titled in Korean “Agassi” or “Young Lady” does feature some violence but it’s an intricate film, a complex one that bears seeing a second time for full appreciation.  Despite its 145-minutes’ length, the time passes quickly as the audience is sucked into a vortex of a story with three parts, each guided by the point of view of one of the principal characters.  It’s loaded with delightful twists, the main one perhaps guessed by the most prescient members of the audience, though if you read the Welsh novel “Fingersmith,” which features even more detail than the movie, you will of course know the dramatic ending.

Though “The Handmaiden” has just a few gory scenes, one involving the flow of blood from a woman who at least poses as a virgin, another being an extended scene of torture involving the cutting off of fingers and a hand.  An additional take is supplied on the use of poison in both smoke and drops of liquid with a couple of visuals of hangings from a tree.

And this is a comedy!  It’s not the kind of comedy that has anyone rolling in the aisles, but is a more nuanced one.  It’s no Shakespearean comedy, which is defined by a story in which the hero lives at the conclusion.  But the whole enterprise comes off as tongue-in-cheek, in which the audience waits patiently for members of the cast to wink.  Nobody does.

Rather than dealing with a girl from the slums of Victorian England, Park’s film transports the characters to Korea and Japan during the 1930s when Japanese occupy the director’s home country.  A poor Korean girl, Sook-hee (Kim Tae-ri) is trained by “Count” Fujiwara (Ha Jung-woo) to become a maid to Lady Hideko (Kim Min-hee). Sook takes residence in the lavish household dominated by a dirty old man, filthy rich, Uncle Kouzuki (Cho Jin-woong).  He has hundreds, maybe thousands of sexual books and trains Lady Hideko from a young age to read from them to an audience of mostly older people.  Sook-hee is actually Tamako, also Okju, whose role is to help the Count’s seduction and marriage to the rich, orphaned aristocrat.

But the Count failed to count on the love relationship that develops between the rich young woman, dressed like a geisha and fated to marry the Uncle when she comes of age, and the scammer who is under the thumb of the sharply dressed count.   To please the dirty old men in the movie audience—and the nice young men and women as well—director Park has no objection to portraying several close-up scenes of passionate sex between the two women.  These scenes of love contrast with the smut that keeps the old Uncle busy: the two young women who fondle each other and then some are easy on the eyes.  Consider this in reality an “NC”-rated film, though it is officially classified as “Unrated.”

The house in which much of the action takes place is a credit to the production values team: huge, ornate rooms on the one hand and simple Japanese style on the other.  As we find out in the story, the owner had a thing for Japanese culture, which is combined with the local style.  Don’t expect to register everything the first time around.  You will want to see this film again—and to read the Welsh novel “Fingersmith,” available at Amazon as are Waters’ “Affinity” and “Paying Guests,” and the TV series based on the “Fingersmith” as well.

Filming took place in the Japanese locations of Nagoy and Aichi and the South Korea areas of Anseong, Goheung, South Jeolia and Pyeongchang.  Dialogue is in Korean and Japanese with clear English subtitles. 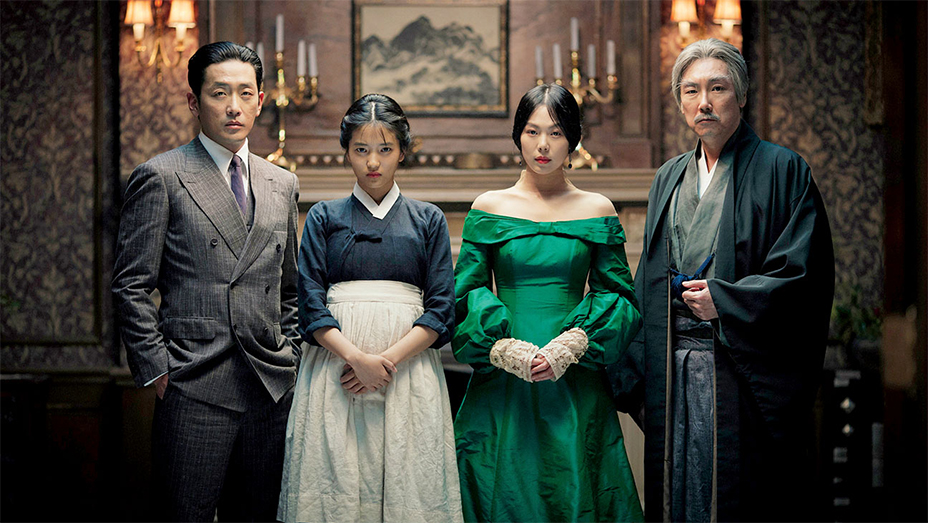