The Spanish playwright Calderón de la Barca wrote a drama called “La vida es sueño” (Life is a dream).  No one can agree with him more than Rip Van Winkle, Washington Irving’s character who slept by a tree and woke up with a long bird twenty years later.  The thing is, he really arose the next day, having dreamed about what life might later be like. That dream was not just a throwaway but one that taught him something about his relationship especially with his wife and allowed him to make changes to increase his happiness.

The dream (assuming this is what writer-director Michal Dudok de Wit and his co-writer Pascale Ferran intended) is one that takes just eighty minutes.  It’s a beautiful dream of one character, unnamed throughout, which may have begun before the movie even started.  I like to think, though, that this allegorical, wholly animated and dialogue-free movie, is the real thing since, after all, a film crew can put anything on the screen and justify it simply by saying “This is all a dream.”

Without question, “The Red Turtle” is a thing of beauty.  One wonders how long animators struggled to knock out eighty minutes depicting man both with and against nature.  The picture opens dramatically.  A blinding rainstorm bears down on a man who might have been tossed from a vessel, a fellow who must use his brain and brawn to survive cut off from everything he knew in life.  For some reason there is no chance of rescue.  He is going to spend decades on this island, his only company at first some crabs who seem to follow him as though he were an alpha crustacean, and a few turtles who swim with him when, in the movie’s scariest moment he falls like the divers at Acapulco’s La Quebrada from a cliff into the deep blue water.

When he tries to navigate, out of breath and unable to scale the slippery cliff, we in the audience hold our breath as well.  Ultimately he must survive thundering rainstorms and a tsunami the likes of which the tourists in Bayona’s picture “The Impossible” could not have imagined.  But happily he has company.  A large red turtle overturns the raft he tries to build, throwing him back on the island.  He turns the animal over, one which seems to have caused its demise, but lo, it morphs into a beautiful woman who accompanies him through a modern Garden of Eden.

They soon have a son who is destined a couple of decades later to make his own life out in the ocean, but our attention remains always with the man with an expressive face and tiny black dots for eyes who does not complain, at least not verbally, nor does he show he is happy about his condition.

Aside from the sky full of stars, a view that we in New York never see unless we travel to the country, the lush vegetation on the island, and the blue of the ocean, the animators present a stark image of a string quartet playing a classical piece but vanish when the man approaches.

So what does it all mean?  Are we in the same territory as Rip Van Winkle, nodding off during the Revolutionary War to escape his wife’s nagging only to discover that after his insight into her death, he decides to be a better husband?  Yes and no.  The trouble with this movie, or perhaps the challenge, if you will, is that Dudok de Wit leaves it up to each of us to find meaning.  But that meaning is even more challenging than present day U.S. interpretations about the meaning of the Second Amendment.

If you go for this type of animation, one that brings to mind the work of Hayao Miyazaki such as “Spirited Away” and is as different from the Donald Duck-Mickey Mouse-Woody Woodpecker cartoons as Donald Trump is from Franklin D. Roosevelt, then this is a must-see.  Otherwise, this can be the longest eighty minutes since that time I spent in a stuck elevator in a Manhattan skyscraper. 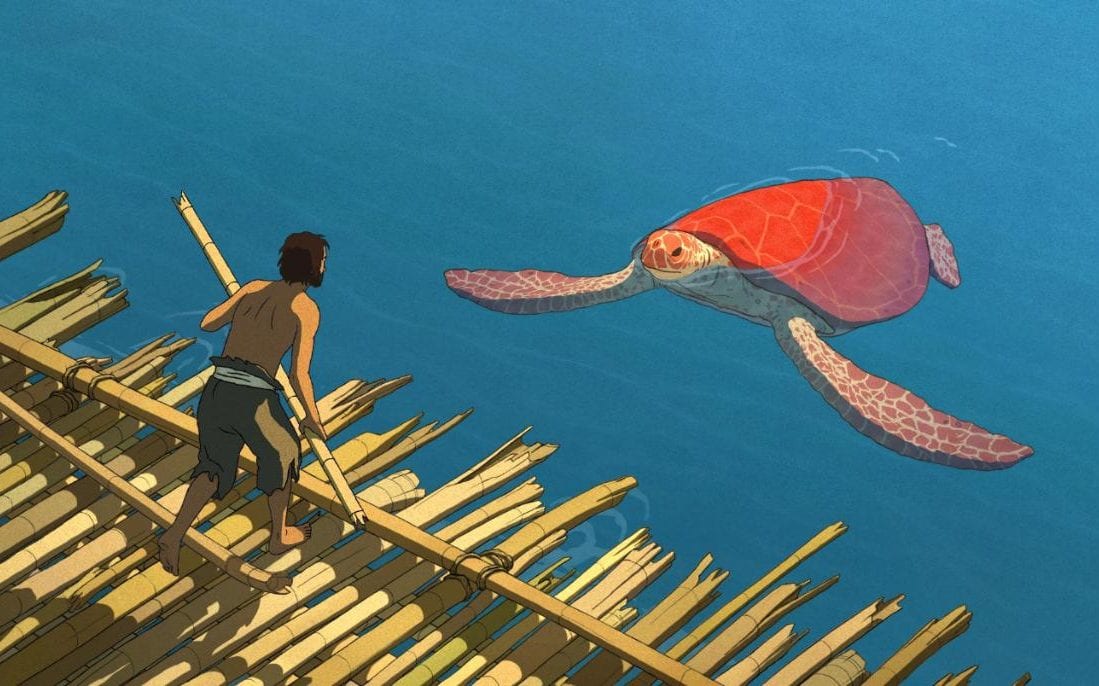