You wouldn’t think that the working class and the unemployed poor, with all their anxieties and day-to-day hassles, would have the time or inclination to read poetry.  That’s probably the case in the U.S. today, where poetry attracts only small numbers of people, but in the 1940s, before TV and the Internet, verses enjoyed greater popularity.  Those who like poetry inevitably say that reading it makes them feel more alive, more inspired.  This is clearly true during the heyday of Pablo Neruda, Chile’s most famous poet, who is widely translated into English and quite a few other languages.  Pablo Larraín treats the famous man not as a subject for a biopic, but more interestingly uses a part of his life to design something more interesting.

Larraín is to say the least an imaginative director, whose trilogy “Post Mortem,” “Tony Manero,” and “No” is an anti-fascist triad dealing with the last days of Salvador Allende’s presidency through the far-right terror of General Pinochet 1973-1988.  Just last year he contributed the somber “The Club” about the secluded, punitive existence of disgraced Chilean priests.  Chile’s most celebrated director’s “Neruda” is right up his alley given Larraín’s politics and fertile bent for magic realism.  Most of this film is fiction. Larraín gives us a sometimes surreal view of Neruda not only as a poet but also as an impeached politician, a Chilean senator and communist, whose arrest is ordered by the right-wing government, thereby setting him up as a runaway fugitive.

Most scenes show Neruda with his aristocratic Argentine-born wife Delia del Carril (Mercedes Morán) and in the company of an assortment of communists, some of whom having experienced working-class stresses more than he.  A hedonist, who appreciates wine and women but in one scene will not hesitate to hug the one truly down-and-out person in the film, he is being tracked down by a bumbling plainclothesman, Oscar Pelluchoneau (Gael García Bernal).  Peluchonneau may be “half moron, half idiot” in the words of one observer, but he is more interested in the writings of the title character than, say, your standard New York City traffic officer.  As he chases the man—and narrates what he doing more than actually having dialogues with those he encounters—he comes to appreciate that his “criminal” may be a great writer, but considers that he is guilty of treason by inciting the masses against the government of President Gabriel Gonzalez Videla (Alfredo Casto) in 1948.

In fact he struggles against the idea that he, a mere detective, may be a secondary character, at least when compared to the great Neruda, and imagines himself as a principal of Neruda’s poetry.  Among the people he meets who can give him further information about the poet is a drag queen, your basic oppressed male, who explains how the poet gives him a feeling of self-worth denied him by society.

Though parts of Chile are beautiful, attracting skiers and sightseers to an increasingly popular vacation spot, Larraín’s photographer Sergio Armstrong does his best to ignore the scenic areas, suggesting instead a snow-covered, remote area, one which leads the detective, motorcycle breaking down, to wonder whether he can even survive the day.  The mostly contemporary music, particularly of Charles Ives, suggests a noir film with chief plaudits to go to the always reliable García Bernal and also to the mostly bald, sometimes bearded Neruda played by Luis Gnecco. 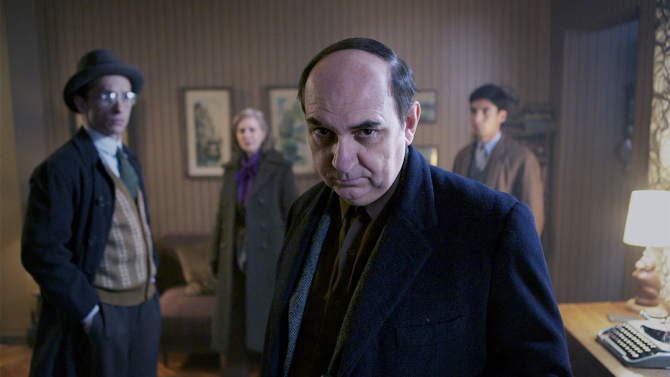