Contending with the confusion over how to solve life’s biggest risks and conflicts is a struggle that many young adults face as they begin building their independence. Even those people who are leading a supposedly ideal life, such as building the foundation for their dream career by attending college, often times go through dramatic experiences as a rite of passage. The new drama, ‘Burning Sands,’ powerfully explores a coming-of-age story that many young adults can relate to, as it shows a student learning the difference between right and wrong, and how far boundaries can be pushed.

The drama is based in part on the personal experiences of Gerard McMurray, who made his feature film writing and directing debuts on the project. The filmmaker, who also executive produced the movie, was influenced by his personal knowledge of fraternity life, and decided to dramatize the experience of hazing at a historically black university. ‘Burning Sands’ is told through the point-of-view of the pledgees who are conflicted over how they should handle being the victims of hazing by the members of the fraternity they’re pledging, which is becoming increasingly more violent the longer they stay committed to their pledge week.

The important situation is being brought to audiences attention, as the drama holds its premiere today at the Sundance Film Festival in Park City, Utah. ‘Burning Sands’ is one of 16 narrative feature films that has been chosen to play during the festival’s Dramatic Competition, which offers audiences a first look at groundbreaking new voices in American independent film. The movie will premiere today at 3:30pm MST at the Eccles Theatre, and will screen four more times this week.

‘Burning Sands’ follows Zurich (Trevor Jackson), a freshman whose acceptance into the prestigious Frederick Douglass University is auspicious, as he doesn’t come from a noteworthy background. But his sense of himself is strong, which helps him receive a recommendation to the Lambda Phi fraternity by the university’s Dean Richardson (Steve Harris). Zurich believes his connection to his fellow Lambda pledgees, including Square, Frank, Ron and Dwight (DeRon Horton, Tosin Cole, Octavious J. Johnson and Malik Bazille, respectively), will last forever. Zurich, who’s majoring in a Biology Pre-Med, is also planning to use his potential new position in the fraternity to follow in the footsteps of the generations of great men who were inducted before him.

Besides the fraternity, the university is a doorway to adulthood for Zurich, especially the thoughtful and challenging lessons he learns from Professor Hughes (Alfre Woodard), a veteran school administrator who teaches his African-American Studies class. Professor Hughes can see that the thoughtful Zurich is a natural leader, and urges him to lead by example. Zurich’s future also looks promising, as he has built a meaningful relationship with his girlfriend, Rochon (Imani Hakim).

But Zurich’s future may be compromised when he gives into the college experience of Hell Week, the ritual he and his fellow pledgees must survive in order to be accepted into Lambda Phi. If Zurich and his new friends can cross the “burning sands” of initiation, they’ll arrive in the promised land of approval and respectability. To help get survive the initiation, Zurich will need to rely on his inner strength to stand up to the frat’s big brothers, including Fernander (Trevante Rhodes), and stand by the friends moving through it with him.

Horton and Cole generously took the time recently to talk about starring in ‘Burning Sands’ during an exclusive interview over the phone. Among other things, the actors discussed how they were drawn to not only their characters’ distinct personalities and motivations, but also the complexity of the situation the pledgees face that McMurray included in the script with his co-writer, Christine Berg. The actors also embraced the fact that the director allowed them to bring their own creative freedom to their roles, and encouraged them to collaborate with him on their characters’ development.

ShockYa (SY): Tosin, you portray Frank, and DeRon, you play Square, who are fellow pledges of the protagonist, Zurich, in the new drama, ‘Burning Sands.’ What was it about the characters of Square and Frank, as well as the overall script and project, that influenced you both to take on your respective roles?

Tosin Cole (TC): I was attracted to the script, particularly the themes that are featured in it. I never really knew too much about fraternities in America, so I was infatuated with telling this story. I also educated myself about what it really means to join a frat, and the history behind it. The character of Frank is different from myself, but I also see similarities between us. So I felt like I could put life into this character, and justify telling his story.

DeRon Horton (DH): What attracted me to Square was his complexity, as well as the fact that he’s out-of-the-ordinary. I love playing characters who aren’t like me. So I really enjoyed the challenge I saw on the paper, and wanted to do my best in playing Square.

SY: Besides reading the drama’s script, do you both do additional research into fraternities, in order to better understand Square and Frank’s motivations to continue through pledge week?

TC: Yes, we had some resources available to us. I did some research on the internet, which expanded my knowledge of fraternities. Gerard, our director, also gave me a lot of information about what he had been through.

Also, when we were filming at the college in Virginia (Virginia State University in Petersburg, Virginia), some of the students there told us some of their stories. We realized that pledging is so big in America, and how important it is to be a part of a fraternity.

SY: Speaking of Gerard McMurray, he made his feature film writing and directorial debuts on ‘Burning Sands.’ What has your experience of working with Gerard, as both a first-time feature film helmer and writer?

DH: Working with Gerard was great. This is is first feature film that he directed on his own, and he did a really great job. He gave us a lot of creative freedom. You expect a first-time director to be very involved, and want the actors to play their characters a certain way, in order to make things perfect for themselves. But he did his best to tell us all the time that this is our film, and it wasn’t just about him. He’s super creative, so it was a breath of fresh air to work with someone who’s that eager.

TC: Gerard is very collaborative as a director. Even though he also wrote the words, he did give us that creative freedom to find the truth in our characters. So we, as actors, were able to find our own voices. He allowed us to make our characters feel very natural, while we also told the truth about them. He did a great job, especially since this is such a big ensemble piece, and we shot the film in 18 days. That was a tough job for him, but he did it.

SY: Also speaking of the fact that the movie was shot in only 18 days, what was the experience of filming the drama independently on such a short shooting schedule? Did that process influence your creativity as actors on the set overall?

TC: We knew that we had to get the job done, since we were only shooting in 18 days. We had to be very camera efficient. We shot in about 30 locations, and on average, there were about five cast members in each scene. So it took awhile to shoot those scenes, especially the big ones. Sometimes, things didn’t work out the way they should have, so we had to adapt quickly. We had to be professional, and get the job done.

SY: With the majority of the film being set on and around the campus of Frederick Douglass University, which is the school Square and Frank attend, what was the experience of actually shooting the drama on location at Virginia State University?

TC: That experience was cool, because every time you see us together, we’re in a different location and environment. We filmed a lot in the woods, and it was good to film in nature. But it was also good to film at the actual college. We filmed in an actual frat house, which was cool, because we were able to take in the energy and vibe of the actual location. I don’t think that anyone in the main cast is from Virginia, so it was great to be able to explore the area together while we were working.

SY: Throughout the movie, Zurich becomes increasingly discouraged by the hazing he and his fellow pledges are subjected to during their pledge week, and he is the main one who expresses concern about the treatment they’re subjected to by the members of the fraternity. Do you both feel that Square and Frank are also both troubled by the treatment they’re being to, or are they overcome by desire to be accepted into the organization?

TC: Frank had a family legacy, as his father and grandfather were in the fraternity. So I think he wanted to fulfill that legacy. At the end of the day, he wanted to get through the pledging, so that he could join the fraternity and enjoy everything that goes with it. I think he learned some good values while he was pledging. I don’t think he questioned anything, and just accepted it for what it was. He did the best he could do to cross the line.

TC: Frank kept to himself most of the time, so I was isolated from the group. So at times, I wouldn’t make eye contact, and would have negative body language towards the group. But throughout the story, Frank goes on a journey that allows him to open up to the group, and I wanted to make sure that resonates with the audience.

SY: ‘Burning Sands’ (is having) its world premiere at the Sundance Film Festival (today). What has your experience been like bringing the drama to the festival?

DH: The experience has been beautiful. Last year was a super busy year for me, so to have one of the first films I have ever been in go on to premiere at the biggest film festival in the U.S. is a really great thing. Of the 13,000 films that were submitted, the festival chooses 16 to screen (during the Dramatic Competition). One of those 16 films is one that I happen to be in, and I’m grateful for that. It lets me know I’m doing something right, and I’m going in the right direction!

SY: After the movie premieres at the festival, it will also be released on March 10 on Netflix. As actors and film viewers, do you both feel the streaming service and VOD platform is beneficial for this type of independent movie?

TC: I think this type of distribution definitely helpful for this type of film. It would be great to have a cinematic release for this film, as you want your films to be enjoyed in the best way possible. I love going to the cinema, and it’s my second home. But I know that independent films do struggle with receiving those cinematic releases.

But Netflix is great, as it’s easily accessible to everyone-all you need is a computer and WiFi. You don’t even need your own account-you can share one with your friends, or do the 30-day free trial! It’s great that everyone can access the film on the same day, and watch it as many times as they’d like on the platform. 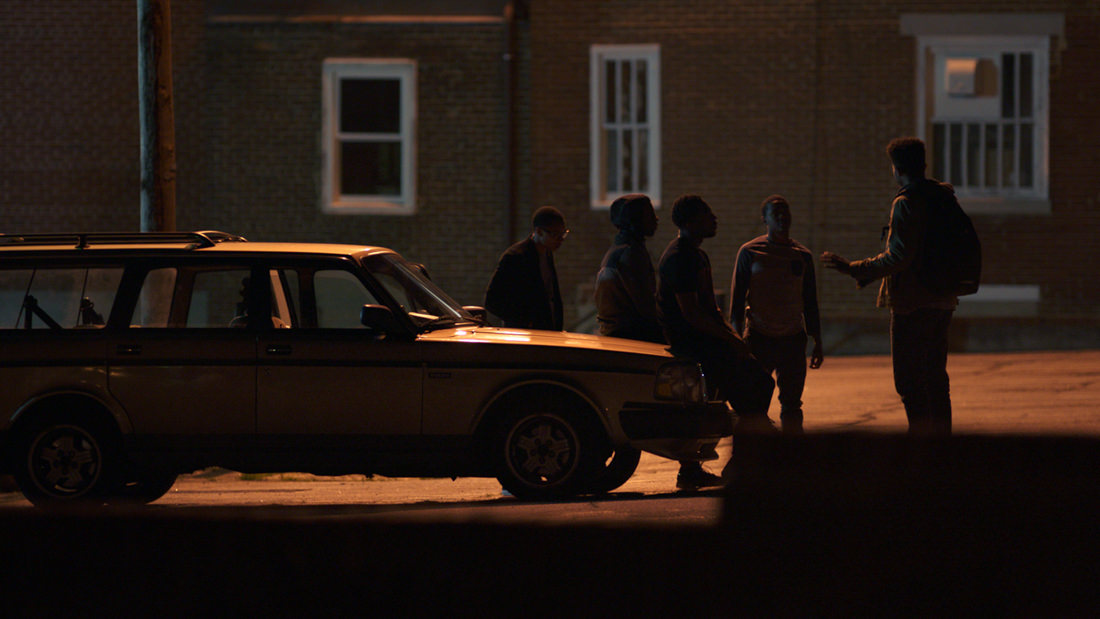