Struggling to fit into conventional societal norms can be an emotional challenge that powerfully influences people’s mindset and reactions in unexpected ways. Learning to truly accept themselves for who they genuinely are can be an even more strenuous battle for some people, but it can ultimately prove to be the more fulfilling choice. That powerful conflict is sentimentally and humorously showcased in the relatable new comedy-drama, ‘Table 19.’

The passionate and comical film was directed by Jeffrey Blitz, and written by Jay Duplass and his younger brother, Mark. Fox Searchlight Pictures is releasing ‘Table 19’ today in theaters nationwide.

‘Table 19’ follows Eloise (Anna Kendrick), a former maid of honor who reluctantly decides to still attend the wedding of her oldest friend, Francie (Rya Meyers). Eloise agreed to step down from her wedding party duties after her Francie’s brother, Teddy (Wyatt Russell), broke up with her two months before the wedding. So Eloise finds herself seated at the title back table, where the guests the newlyweds felt obligated to invite, but aren’t close to, are placed.

Eloise finds herself seat with a bickering married couple, diner owners Jerry and Bina (Craig Robinson and Lisa Kudrow), who are casual colleagues with the bride’s father; the well-meaning but nosy Jo (June Squibb), Francie’s childhood nanny; the recently released white-collar criminal, Walter (Stephen Merchant), who’s a cousin of the bride and is still a disgrace to the family; and teen loner Renzo (Tony Revolori), who’s desperately seeking female companionship.

Upset over her demotion and placement in the back of the room, as well as hurt over the sight of Teddy getting romantic with the Francie’s new maid of honor, Nikki (Amanda Crew), Eloise leaves her tablemates to find comfort in wedding crasher Huck (Thomas Cocquerel). But after he mysteriously leaves the reception, Eloise realizes the only true contentment she’ll find during the rest of the party is with her fellow condemned guests. As Eloise and her tablemates slowly but surely bond over being considered the outcasts of the wedding, they all help each other finally find contentment in their lives, and realize that their situations aren’t as devastating as they initially believe.

Kudrow, Russell and Blitz generously took the time earlier this week to attend a post-screening Q&A at New York City’s Cinepolis Chelsea theater to talk about their experiences making ‘Table 19.’ Among other things, the performers and director discussed how even though some of the characters in the film, particularly Bina and Teddy, have caused their partners unease throughout their relationships, they also eventually show their underlying vulnerabilities, which makes it easy for people to realize they’re just reacting to their pain. The director also spoke about his process of adapting and changing the characters and their storylines a bit to better fit the actors once they were cast, in order to allow their true personalities to come across on screen.

One of the highlights of the romantic comedy-drama is the floundering bond between Bina and Jerry, and their struggle to rekindle their relationship. While discussing her experience of working with Robinson on the film, Kudrow revealed that “Craig insisted that it would be fun. He’s the most joyful person I think I’ve ever met. If there was downtime, he’d start singing, and Anna would join in, and we would have an unbelievable concert. He was easy to work with, so the hard part was being mean to each other, but he was good at it,” which garnered a laugh from the crowd.

While Bina and Jerry struggled with letting their unease with each other not ruin their experience at the wedding, Teddy also raises turmoil with some of the other characters in the beginning of the movie. Russell admitted that when he first read the script, he immediately thought his character was rude to everyone at the wedding, particularly Eloise. “But then I spoke to Jeff one day, and began to think about how I could add to the role, and I think that’s what he was looking for. There was an empathy underneath that I was trying to play in hindsight,” the actor explained. He added that as the story continues, audiences will begin to better understand his character, and why he has committed the acts that he has done.

Blitz also chimed in on the evolution of Teddy throughout the film, and how he, who initially appears to be the villain, turns out to just be misunderstood. The director explained that in life, he doesn’t think of people as being good or bad, which is why he didn’t create an obvious antagonist throughout the entirety of ‘Table 19.’

“It’s much more interesting to see people for who they are. We get the visions of who these characters are, based on what they share with us at the start. Part of the journey of the movie is that the things you learn about them in the beginning, and the things you take away at the end, aren’t always the same thing,” Blitz explained. “So much of movies is letting people share their true selves.”

Kudrow then revealed that when she met with her director, “the thing we talked a lot about was this couple becoming neglectful, and they stopped paying attention to the relationship. So they stop being nice to each other, which moves into one thinking the other one doesn’t like them anymore, and they start becoming resentful. I think that’s an easy thing that starts happening.” But the actress also appreciated that Blitz “had funny things for us to say and do.”

While ‘Table 19’s driven by its many distinct characters, Blitz admitted that there were instances when it was difficult to fully develop all of the roles in the ensemble film. “During the script development stage, I wanted to spend as much time with each character as I could…I enjoy spending time with them. For me, when characters speak, and start to share themselves, I can spend a lot of time with them,” the filmmaker explained. He also revealed that he would have been content in setting all of the action just at the table, “but people told me, ‘I don’t think anyone would go see that.'”

Even though there are many scenes in the movie that are still set in the reception room, particularly at the title table where Kudrow’s character is sitting, the actress divulged that shooting in the space “was a lot of fun. We also had a waiting area off of the side of the room, and we all got to sit together.” Russell also chimed in on that experience, and agreed with his co-star that it was a lot of fun.

But Blitz admitted that one of the things he worried about was that if Russell accepted the role of Teddy, he would become alienated from the rest of the cast. “You would end up at a table with people who couldn’t dish anything back to you, as they’re not a part of the main cast.” But Russell accepted and embraced the experience of interacting with the extras at his table, as well as with Crew, as it helped highlight his emotional distance from Eloise and what she’s been experiencing since they ended their relationship.

The filmmaker also revealed that he enjoyed the quirks Jo brought to the table when she meets her fellow guests. Blitz likes the fact that “when people live long enough, many of them arrive at an age where they don’t care. So whatever the social norms are, they don’t care about them anymore. I like that Jo had arrived at that age. She’s the type of person who would do whatever she wanted to do in the life she had left.”

Blitz further spoke about developing the characters, and how they would fit not only into the reception, but also society, particularly after the actors were cast. The director revealed that most of the rewrites to the script were catered to Merchant. “I hadn’t imagined a human could be that tall,” he admitted, which garnered a laugh from the crowd. “He’s about 6’6″ or 6’7”, and he also wears shoes on top of that, which adds to his height.

“As conceived, the character wasn’t a Brit or super tall. He also wasn’t a verbal guy.” But the filmmaker was drawn to cast Merchant, “as he brings a light to things. So you don’t want to have him play a character that doesn’t allow him to be that verbal guy.”

While initially developing the characters for ‘Table 19,’ Blitz did have Kendrick in mind to play Eloise. The two had previously worked together on the 2007 comedy-drama, ‘Rocket Science,’ so when the helmer “first received Jay and Mark’s script, I looked for a way to take a character who was a small part of the story,” and tailor it for her.

“With Wyatt, I saw him in another film, and I immediately thought it would be smart to get him…Casting happens in a very intuitive way, and you just let it happen. As soon as the studio also suggested that we bring him in, it seemed like such a good idea. I then met with Wyatt and we started to talk about it, I thought casting him was such a great idea,” Blitz revealed. He added that he was worried that during their meeting, Russell would change his mind, and was happy when he ultimately agreed to take on the role.

In terms of casting Kudrow as Bina, the helmer shared that the questions she had about the role were some of the same ones that he “had intuitively known would be the really important ones. Or (she asked) questions that I hadn’t thought about at all,” Blitz admitted. “I thought, having someone who could get to the heart of what I was thinking, and then also asking things that I should have been thinking, but wasn’t,” was an important quality in an actress.

“It was funny, because I was nervous, too,” Kudrow then revealed. “I thought I was going to sound like I didn’t know the character, and would be completely wrong.”

Blitz added that he can usually keep the script separate from what the final movie is. “But when I think back on the script, I wasn’t thinking about that character too much. But with Lisa became interested the role, it became so important to me” that she played the role of Bina.

Watch the official trailer for ‘Table 19’ below. 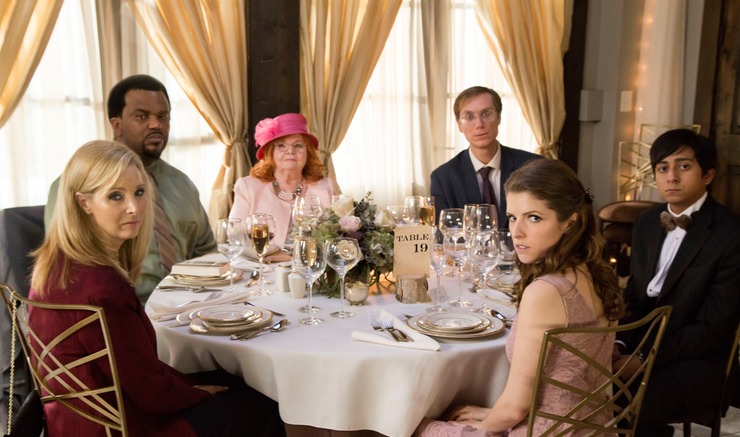