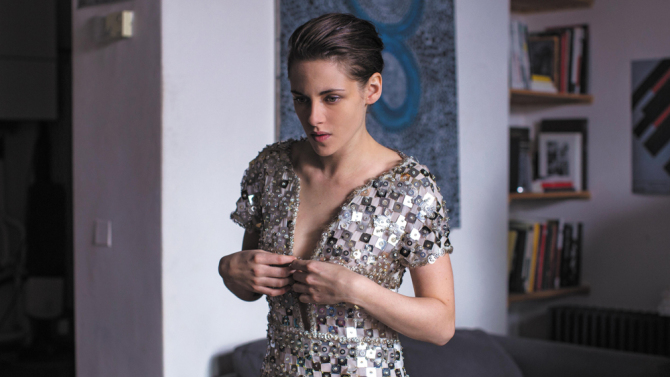 This tale of two cities may not be about the French Revolution but is distinctly about the revolution in communication.  The biggest breakthrough in how we talk to others without their physical presence may have been the invention of the telegraph, but with smart phones we can now communicate with scores of our social media friends at the same time and without more than a nominal monthly charge.  Much of the chit-chat between Maureen (Kristen Stewart) and a mystery guest who contacts her regularly by a smart phone has us in the audience wondering along with Maureen: just who is this creep that does not identify himself but is all but stalking her through these hand-held gadgets?

“Personal Shopper,” then, is in part a thriller which involves a gratuitous murder but which is designed far more to provoke our curiosity and anxiety along with Maureen’s.  In some cases no phone is needed.  A ghostly presence appears sometimes as smoke building into the shape of a head, sometimes as knocks on a table (one for yes, two for no), and once even as a drinking glass that travels slowly across a room, then drops to the floor and breaks.

This is a slow-moving tale, a ghost story for fans of arty movies, and one that fits into the mindset of Olivia Assayas, who is known for taking chances.  In Assayas’ previous film involving Kristen Stewart, Alps-situated “Clouds of Sils Maria,” a film star comes face to face with a reflection of herself in a part she played twenty years ago.  By contrast, “Personal Shopper,” which takes Maureen from Paris to London and back, then to Muscat, Oman for a brief concluding scene, is minimalist, with a conclusion that leaves us in the audience hanging and seeking more to explain a number of bizarre occurrences.

This time Ms. Stewart—who was wonderfully comic MC-ing and doing skits for “Saturday Night Live” last month– appears in nearly every frame, the changes in atmosphere reflected in her puzzled and often irritated face.  Her twin brother had died of a heart attack recently with a defect that Maureen assumes she has as well.  Since both had been mediums, they had agreed that whoever died first would try to communicate with the spirit of the other.  She fulfills the promise by contacting her brother twice in Europe and once again in the Persian Gulf.  On a more concrete level, she is baited by a mystery person who on his smartphone implies that he is following her about.

When she is not showing inner torment, Maureen is a personal shopper to a rich, finicky celebrity who is seen briefly and appears to have no time to shop for dresses and jewelry.  She leaves Maureen with blank checks to shop at Cartier and some upscale clothing stores.  In one scene a trusting Maureen picks up earrings and a necklace and, with a Cartier-label bags in hand, heads off on her motorcycle.   When she is not on her bike, she takes the Chunnel train from Paris to London and back, where she gets the “I know you” threats and suggestions.