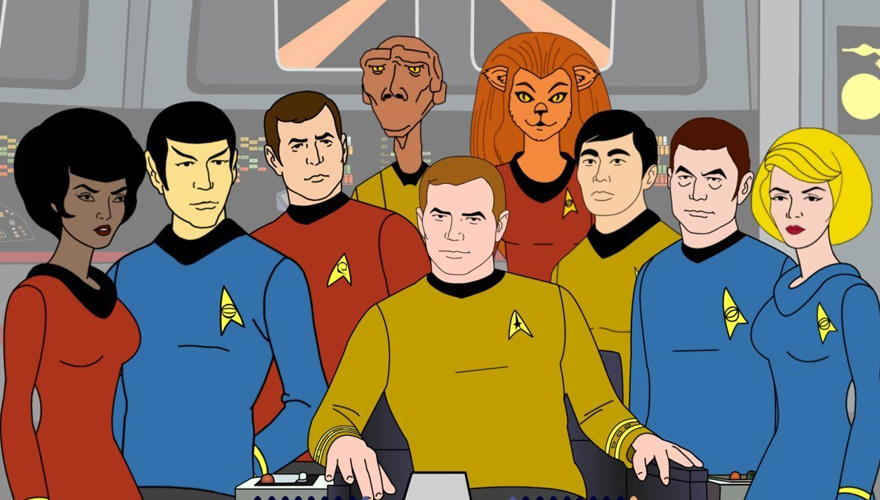 From 1973 to 1974, Star Trekkers were gifted with 22 episodes of animation that featured the voice talents of their favorite characters (minus Walter Koenig) from their beloved series. Several of the writers from the original live action series were hired to write for the animated series, and many were out of work at the time due to a writer’s strike. Luckily for them, animation was handled by a different union. Some of the episodes were pulled from a reject pile from the live action series, and many elements from the animated series made it into The Next Generation and Enterprise series.

The Good: The text commentaries were like watching Pop Up Video. There were loads of information that any fan of the Star Trek series and spinoffs would appreciate.  The episode Yesteryear is a favorite of a lot of fans, and I will agree it was the best written. The episode gives a backstory to Spock, growing up as biracial (half human/Vulcan), dealing with bullies and the death of his pet I-Chaya. So much relatable material jammed into one episode.  The animation is of course catered to children, so they’re allowed to go silly on some of the storylines, but still able to be enjoyed by adults.

The Bad: The animation is not great. Why did they have to make their eyes the same color as their skin? Replacing Chekov (Walter Koenig – who was able to be included by writing an episode) with alien Lieutenant Aerix was lame. Yes the inclusion of different alien species was something that could not be achieved on the live action show, but some of these creatures were poorly conceived and felt like they were trying too hard to make up alien creatures in which to integrate in the show.  The voice acting fell flat for me. With many of the episodes, the actors sounded like they really weren’t into the scripts they were reading. The special features justify the price of the Blu-Ray. Any true fan of the Star Trek series will not be disappointed.