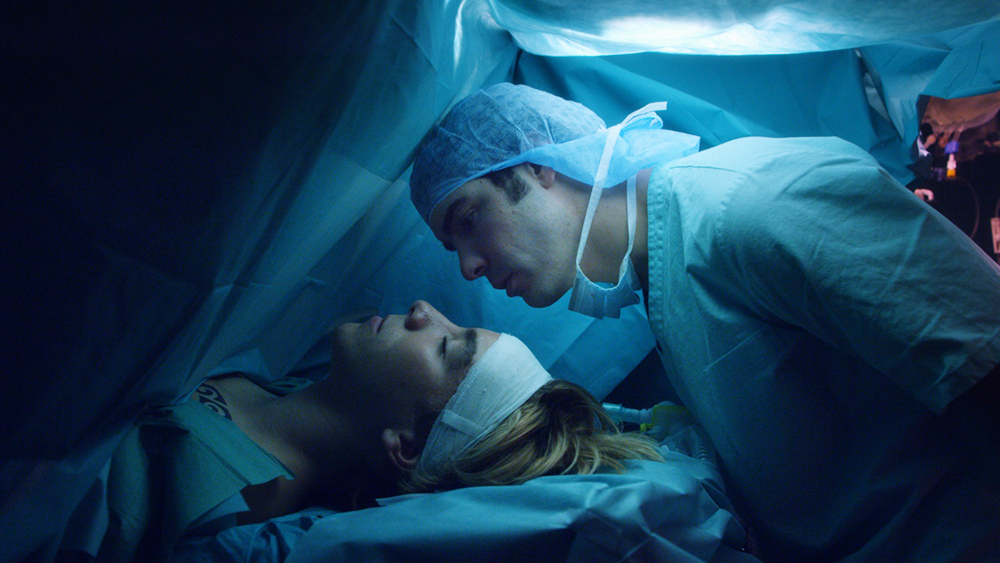 Photo from Heal The Living, We are all connected

“We’re all connected” sounds like a tagline for a phone company and  favorite saying of social scientists, peace activists, and miscellaneous do-gooders as well.  Now comes a new interpretation that cuts through anything metaphoric.  We’re connected as well through parts of our bodies.  The expression could be used as a tagline for hospitals that transplant organs, saving lives, when people who have the good will to be organ donors can feel proud of themselves knowing that when they die, parts of the their bodies can be used to heal the living.

Katell Quillévéré, who directs and whose script (co-written by Gilles Taurant) is inspired by  Maylis de Kerangal’s novel “The Heart,” does not intent to duplicate the central idea of TV’s “E.R.” or the more apt “Three Rivers” (the latter about a hospital that does transplants exclusively in a TV offering which did not deserve to be cancelled). Though the actual technology behind heart transplants is on exhibit in the film, featuring the removal of a heart from a brain-dead person and its transfer to a middle-aged woman, the director is more into how we can transcend nature by focusing on the good will in each of us, the good will that motivates at least some to give up their organs upon death so that others may live.  Some of us are connected indeed.

Quillévéré has just two other full length movies to her directing credit.  Her “Love Like Poison” is about a teen who comes home from Catholic boarding school to find that her father has deserted, and her “Suzanne” focuses on a love affair involving a woman on a journey.  Neither has the impact of her current offering, in which two stories are involved, the relevance of each to the other obvious enough to the folks who treat foreign language films without the horror that seems built into much of the American moviegoing psyche.  She opens on high drama as Simon (Gabin Verdet), a 17-year-old athletic man skilled in both surf and turf (riding the waves and using skateboard and bicycle), leaves the flat of Juliette (Galatéa Bellugi), his girlfriend to meet with his two friends at five in the morning to go ride the waves and drive off.  After a horrendous crash of their vehicle, Simon is brain dead in a hospital, the consultant, Thomas Rémige (Tahar Rahim)left to give the bad news to the boy’s mother Marianne (Emmanuelle Seigner) and father Vincent rapper (Kool Shen).

The devastated parents think it over, agreeing to allow their son’s heart to be harvested for transplant, at which point the scene changes (with several flashbacks) to a sister story.  Claire (Anne Dorval) learns from her surgeon that her heart is decompensating and that despite the imbeded defibrillator will soon fail.  Though seeming as reluctant to make bodily changes as were Simon’s parents, she agrees to the operation.  She is somehow put immediately at the top of the list to receive Simon’s heart.  Quillévéré has no problem using screen time to show how the heart is put on a plane and rushed by ambulance with a police escort (isn’t French Medicare-for-all wonderful?). We are privy to the way the chest is cut open, the aging and deteriorating heart gently lifted out, and a perfect, youthful one sutured in.

Throughout, we are shown incidentals that make “Heal the Living” far more than a medical documentary.  We peer into the lives of the human beings doing ordinary things and extraordinary ones as well.  The hospital administrator, Pierre Révol (Bouli Lanners), is a late-middle-aged man who likes rap enough to play it on the car radio and sing along.  The operating consultant has a hobby of watching goldfinches on TV and remarking how he would like to go back to his home town in Oran, Algeria, to buy such a bird.  Marianne and Vincent, married but living separately, are brought together by the domestic tragedy.  A nurse (Monia Chokri) hallucinates a sexual dream in the elevator with the surgical consultant as her partner.  The lucky woman who is to receive the heart has a lesbian relationship with a concert pianist, whose recital of contemporary music is given several minutes of screen time for our listening pleasure.

Tom Harari behind the lenses captures the interiors of the hospitals with outdoor scenes of Le Havre, where the three youths ride the waves, and Thomas Marchand edits skillfully to allow the flow from young Simon to middle-aged recipient Claire. Though Tahar Rahim takes top billing, this is really an ensemble production, putting the lives of people in crisis under the microscope; actors with the confidence to show the emotional resonance you might expect.

Though human drama takes precedence over socio-political commentary, one would not be surprised if my fellow Americans would rethink their passivity when noting that the section of their auto licenses that grant authority to donate organs remains unchecked.

Cancel reply
Kickboxer Vengeance Movie Review
The Lost City of Z Review: He survives, and goes back
To Top